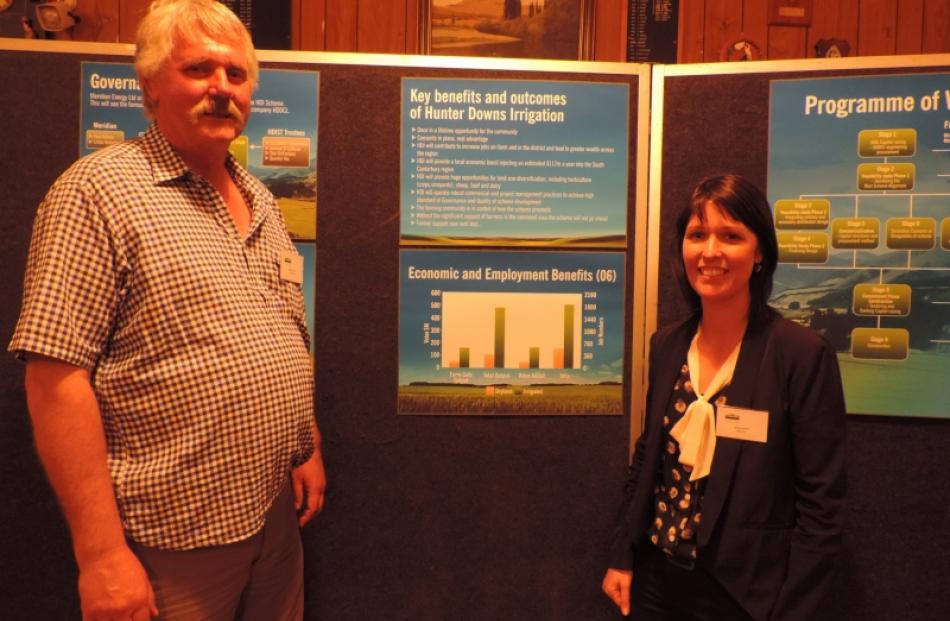 The Hunter Downs Irrigation Scheme has been awarded $640,000 from the Ministry for Primary Industries' Irrigation Acceleration Fund. It will help pay for engineering design, an investigation into demand from landowners, and a fundraising prospectus.

''The HDI Scheme is a large-scale infrastructure initiative that hopes to significantly address this problem.

The HDI Scheme is the result of seven years' collaboration between Meridian Energy Ltd and the Hunter Downs Irrigation Scheme Trust (formerly the South Canterbury Irrigation Trust). The two bodies have formed the Hunter Downs Development Company Ltd - the recipient of the government funding.

The grant was confirmed on Thursday, just two days after an open day in St Andrews to give an update on the scheme's progress and stimulate interest in it.

Some 300 landowners in the command area from Waimate to Otipua were invited, with an estimated 100 turning up despite the gale-force winds buffeting the region.

The group responsible for community and farmer communications on the project is Hunter Downs Irrigation Ltd. Chairman Andrew Fraser said once the scheme's feasibility was determined, up to 40,000ha within the 60,000ha command area could receive water.

The consents to take and use a maximum of 20.5 cumecs from the Waitaki River at Stonewall were confirmed in late 2011. This is also the site of an intake for the Morven Glenavy Ikawai irrigation scheme. It is possible Hunter Downs will be integrated with both it and the Waihao Downs scheme.

The programme of work carried out with the grant will allow farmers to make informed decisions on the scheme's construction, which is expected to start early in 2016, Mr Fraser said.

''The HDI Scheme will provide opportunities for land use diversification including horticulture, sheep, beef and dairy farming.''

The benefits will reach far beyond the farms to the wider community, he said. The open day had helped to build a lot of confidence in the concept.

There will now be an emphasis on getting more information out to the region and holding field days to demonstrate the irrigation scheme's potential.

Farmer cluster groups will be formed and case studies developed to show productivity and affordability under different farming systems.

The farming community is in control of how the scheme proceeds, the directors said. Without significant support within the command area, it will not go ahead. A minimum uptake of 20,000ha is needed.

It was a ''once in a lifetime opportunity'', the directors said.