Irrigation a ‘positive’ in arid region

Maniototo farmer Emma Crutchley and her dog Trixie. PHOTOS: SALLY RAE
When Emma Crutchley first expressed an interest in farming as a career, her father told her she could ‘‘probably make more money doing something else’’.

But there was no changing her mind, even though farming in the Maniototo was not something for the fainthearted.

She grew up on the family sheep and beef farm, with her parents Geoff and Noela, and brother Bruce, and always loved the rural lifestyle.

After leaving school, she headed to Lincoln University for four years where she studied agricultural science, completing her honours dissertation on lucerne.

She joined PGG Wrightson and worked on a research farm as a forage agronomist, conducting research on different cultivars and valuation of new cultivars.

From there, she headed to Landcorp to work as a forage agronomist, based in Wellington for two years, which gave her a ‘‘fairly full view’’ of both urban and rural life.

She loved her time in the capital — ‘‘Wellington is the coolest little city to live in’’ — and her job involved working with farmers throughout the country. A highlight was getting to see some ‘‘amazing places’’.

In 2009, she had the opportunity to come home to Puketoi, the family farm, which totals just under 3000ha. 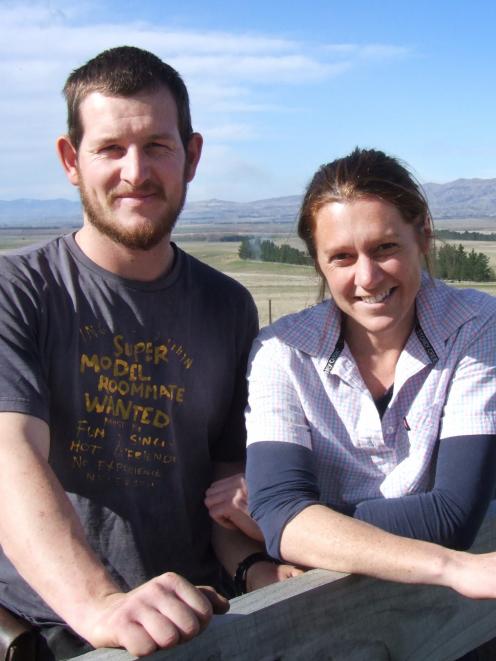 Kyle Hagen and Emma Crutchley.
Water was always a massive part of her upbringing; her father has been hugely involved with irrigation and water affairs for decades.

His involvement with the Maniototo Irrigation Company began just before the scheme was commissioned in 1984, prompted by the high water costs proposed.

He was among a group of five who succeeded in getting a reasonable deal and, following that, was among those elected on to the irrigation committee.

He had been there ever since.

Water had not always been Mrs Crutchley’s area of expertise. While she acknowledged she was ‘‘quite fluent’’ talking agronomy, it was her father who had been the water expert.

But she tried to get involved in the community where she could and she was now a director of the Maniototo West Side Irrigation Company.

She has also been heavily involved with a group of Maniototo women who launched a campaign against Labour’s water tax proposal.

She was frustrated about attacks on farmers, saying it felt like they were a ‘‘shrinking proportion’’ of the New Zealand population.

‘‘I feel there’s a lack of understanding with some people in urban areas about how we operate. I think that’s really scary for us and some of the things we’re made out to be. We are just small businesses . . . working pretty hard to make a life for ourselves,’’ she said.

‘‘There’s a lot of good people involved in agriculture,’’ she said, adding that she felt they were misrepresented at times.

The group was there for the long term, ‘‘just painting a positive picture of what we do’’ and trying to explain what a negative effect a water tax would have on the local community and wider Central Otago region.

Puketoi Angus cows graze in the Maniototo.
‘‘It [irrigation] is portrayed so negatively. A lot of reporters are reporting what they want, based on the popular story, not necessarily the truth.

‘‘Dad worked right through from before irrigation came to the Maniototo: it was so positive. Now it’s seen as such a negative thing. It’s quite disappointing for him after 30 or 40-odd years.’’

With rainfall of 250mm to 270mm in a dry year, that was ‘‘a desert’’. Irrigation had brought economic and social benefits to the district..

The family wanted to farm sustainably, creating a property they were proud of environmentally and that they also shared with others to enjoy, such as fishermen and hunters.

Her parents planted ‘‘tens of thousands’’ of trees and the family was now planting about 500 a year, which would be there for future generations.

The biggest project for the past 15 years or so had been converting all border dyke irrigation to pivots. Over an area of about 400ha, that had been a massive undertaking, both financially and logistically.

Puketoi was home to the Puketoi Angus cattle stud, which was founded by Geoff and Noela Crutchley in 1972, and which has an annual bull sale.

Mrs Crutchley’s husband Kyle Hagen now did much of the cattle work. He came from a deer farm at Te Anau and was working on a Landcorp property when the couple met. The couple have two young children, Evelyn (4) and Reuben (2 1/2).

She believed it was important to have areas of focus within the business, especially when a couple was working together, and she tended to be more involved with the pivot development and pasture renewal.

Her brother Bruce was doing a lot of work with bees, with 14 beehives on the property, which was adding another dimension to the business.