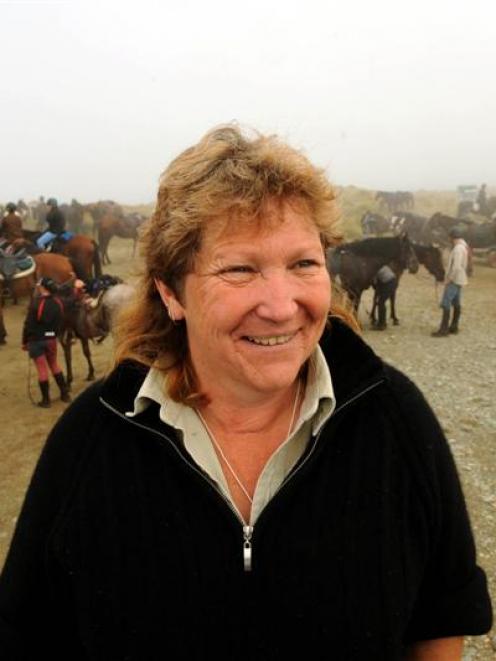 Linda Barnes, with the Tussock Creek light wagon trail, outside the historic ski hut on the Nevis Rd, above Garston. Photo by Stephen Jaquiery.
It would be fair to say Linda Barnes is a battler.

Wild horses, or, in her case, a brain haemorrhage five months ago, would not stop her from notching up her 20th Otago Goldfields Heritage Trust cavalcade.

Mrs Barnes (51), from Alexandra, has been with the Tussock Creek light wagon trail this week, travelling with the back-up vehicles.

But, come Saturday, she will ride into Cromwell on her 20-year-old standardbred horse Diesel, a veteran of 16 cavalcades, for the grand finale of the event. Being able to do that, despite medical advice to the contrary, was going to be great, she said.

"Technically, I shouldn't be here," she said, in her typical matter-of-fact way.

It was September 25 last year and Mrs Barnes had just got out of the shower when she collapsed, having a seizure, while sitting on the bed putting her socks on.

She was flown initially to Dunedin Hospital but was then flown to Christchurch because there was no-one in Dunedin with the medical skills to treat her. Her condition was so critical her sons were called home.

Mrs Barnes did not remember much about her time in hospital in Christchurch, apart from being given a Zimmer frame and being "totally mortified" about using it to walk.

Since being home, she had tried to ride her horse, but that had proved difficult because of the headaches she suffered. So her husband, John, was delivering Diesel to her for the trail's final short ride into Cromwell.

If it had not been her 20th cavalcade - she is one of only nine people to have done every one - she "wouldn't have been here".

And while she had not been looking forward to the fact she could not ride - "I like the old backside in the saddle" - she was enjoying herself and being looked after well.

"It has been quite good. I thought it would have sucked because I ride."

Mrs Barnes recalled the first cavalcade, back in 1991 over the old Dunstan Trail, which proved to be quite eventful, with a blizzard just two hours into the first day.

The temperature dropped about 10degC in five minutes and she remembered it being like "concrete blocks hitting you in the eyeballs".

That failed to deter her and she came back year after year, receiving a new cavalcade badge for her hat each time.

Her hat was now quite heavy, although she had to replace six over the years.

Two got "pinched" and the other four had fallen off.

"We've had a lot of fun over the years. There's a lot you can't write about." While Mrs Barnes has spent the past three years saying each cavalcade was her last, this year she really meant it, although her decision had nothing to do with the brain haemorrhage, she said.

Rather, it was time she and her husband did something together; so they planned to go motorcycle riding on their Harley-Davidsons.