Life on land change of tune 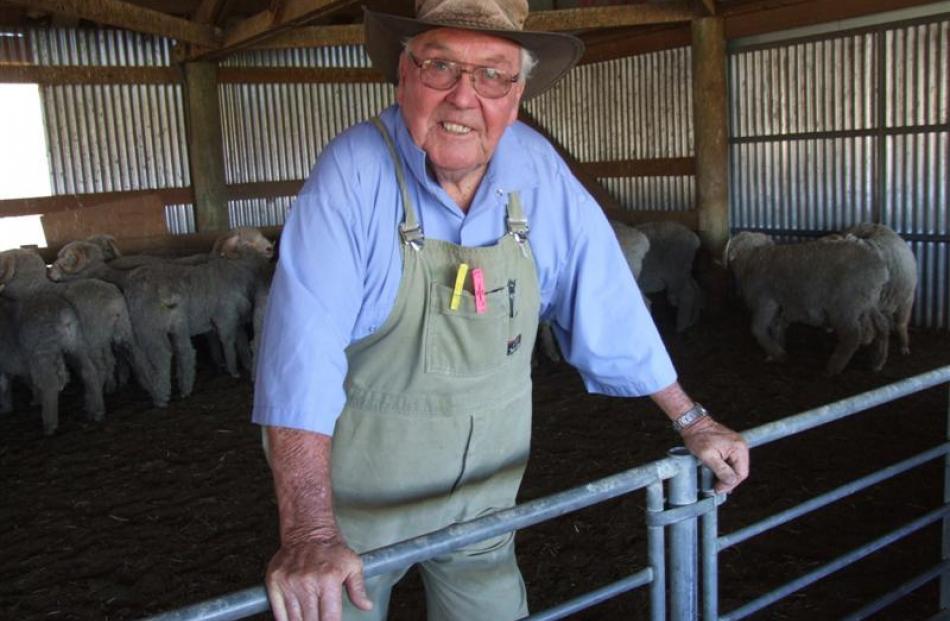 Gordon McMaster in his element at Balmoral Station, near Lake Tekapo. Photo by Sally Rae.

Australian sheep classer Gordon McMaster could have taken a very different career path - if it had not been for his father.

While known internationally for his involvement with merino sheep and kelpie dogs, it was music that was his first love and he nearly became a professional musician.

As a lad, Mr McMaster (75) reached the finals of the Australian amateur drumming championships and he was offered a position in a band in Sydney.

But when the young Gordon came home from school and told his father, he was told, in no uncertain terms, that no son of his would be a professional musician.

Instead, he was dispatched to Haddon Rig - one of the leading merino studs in Australia, which was founded in 1882 - to work as a jackeroo.

Not that he was not keen on sheep - he laughingly recalled how under the lid of his desk at school he had photographs of boxers, women, musicians and sheep.

That was followed by stints on various other merino properties, where he worked up through the ranks before he started his own business on July 1, 1978.

Two years later, he was awarded a Churchill Fellowship to study overseas developments in the breeding and husbandry of merino and dual-purpose wool and meat sheep, and also trends in the woollen textile industry, which saw him travel to South Africa, the United States and Russia.

He extended the trip, spending time in other countries. He got the "travel bug" and has been travelling ever since.

Mr McMaster comes from a farming background - his family migrated to Australia in 1834 and he is the fifth generation of his family to have worked on the land.

He was always keen on stud breeding and described merinos as the "aristocrats" of sheep breeds.

He started coming to New Zealand in 1982 and has been coming out twice a year ever since, mostly to the Mackenzie Basin, Marlborough and Canterbury, up until last year when he became seriously ill and spent months in hospital.

His current trip to New Zealand is "partly" his swansong as he is handing over the reins of the business to Chris Bowman, although he will still come out to help out at three flocks.

He would miss those trips "tremendously" as his clients had become friends and he had seen their children grow up.

He made no apologies for ruffling a few feathers over the years - "I've said how it is, in my opinion" - and he had left his business in good hands, joking that Mr Bowman was "far more diplomatic".

His work had been much more than a job - it was a passion and, while he had driven more than five million kilometres, he never got sick of it. "I don't think I've ever got up and said 'I've got to go to work'."

On his trips to New Zealand, he was always met at Christchurch Airport by Bruce Miles, from Miles Toyota, who supplied him with a vehicle for his travels.

When Mr McMaster first came to New Zealand, he did not think merino breeders were on track.

He felt the sheep were too complicated, short in the staple, too tight in the skin, unproductive and hard to manage, although the wool was "excellent".

While he felt management here was generally better than in Australia, he believed New Zealand breeders had been limited in their vision, and had not seen the attributes of different ways of breeding.

Things had changed and he was now seeing high-performing sheep, which were trending towards becoming a dual-purpose animal, and they were far more profitable and far easier to manage, he said.

Mr McMaster sold his own merino stud about 10 years ago but is now in a three-way partnership with the Armstrong family of Cassilis Park in Australia, and Andries Pienaar, of the Mega Merino stud in South Africa.

In January 2009, he was honoured with a Medal of the Order of Australia for services to the merino wool industry and the kelpie working dog industry.

His Wyreema Kelpies stud, which was established in 1882, is the world's longest established breeder of kelpies.

Mr McMaster is the fourth-generation in his family to run it, taking over in 1964. He sells between 50 and 60 pups a year and has exported dogs to Argentina, Uruguay, Brazil, the United States, Switzerland, Russia, South Africa, Germany, Saudi Arabia and New Zealand.

He has also formed a partnership in Germany, with Frank and Marieka Doll, making the working dogs available in the European market, and they sell between about 20 and 25 pups a year there.

Mr McMaster, who lives on a small farm near Narrandera, in southern New South Wales, used to do a lot of dog trials until he got too busy with work. Now he works with an associate and the pair start the dogs together.

He has also given demonstrations in the main arena at the Sydney Royal Easter Show, working six to seven dogs, and at other cities and towns throughout eastern Australia. He is a foundation and also life member of the Working Kelpie Council.