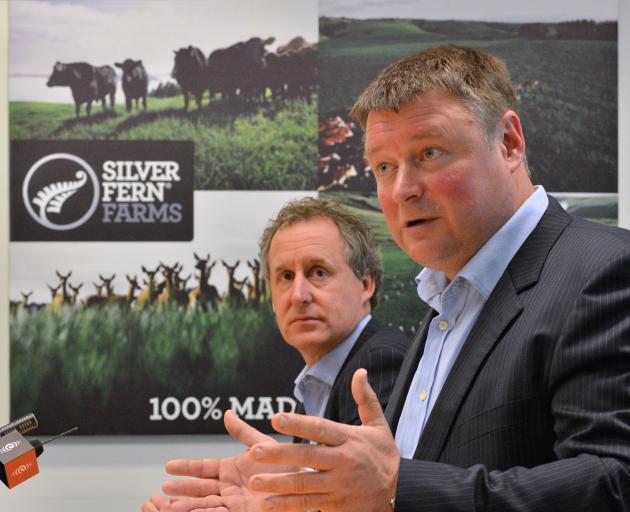 The loss, for the year ended September, compared with a $24.9million net profit in the previous financial year.

Operating earnings before interest, tax, depreciation and amortisation (ebitda) were $32.1million, down from $90.5million.

In December, Silver Fern Farms completed its joint venture partnership with Shanghai Maling, with the Chinese-owned company investing $267million in cash in return for a 50% stake in the business.

While the financial result was in line with previous guidance of a ``small operating loss'', it was disappointing and reflected a very challenging year across the industry, Mr Hewett said in a statement.

``The company managed its way through a tough year as a perfect storm hit with sharp falls in a number of end-markets in the first half, lower industry-wide volumes, unseasonal livestock flows which limited capacity utilisation, and a strengthening New Zealand currency through the year amplified in June by the Brexit event.

``It was one of the tougher environments we have been in for some time as events impacted both beef and sheep,'' he said.

It was impacted by a one-off $22.4million no-cash accounting writedown related to the Shanghai Maling investment.

``As at balance date, we had an unconditional, but at the time yet to be completed, investment by Shanghai Maling.

``Since the successful completion of the transaction was considered highly probable at balance date, the company was required under accounting standards to take a one-off non-cash accounting writedown in the value of the disposal group to reflect the value at which Shanghai Maling was investing at relative to our historical book values.

``Of the $30 million non-cash writedown, $22.4million was taken through the P&L and $7.3million through reserves to reflect the reversal of previous asset revaluations,'' he said.

Looking ahead, chief executive Dean Hamilton said the company was confident that, if a more settled operating environment prevailed, combined with improvements it had undertaken and had planned, its performance would ``improve significantly'' this year.

While very disappointing to ``substantially'' miss its profitability goals for the year, good progress was achieved in various areas; continuing to grow its value-added business, improving health and safety performance, and creating a sustainable capital structure.

A 31% increase was achieved in value added sales of Silver Fern Farms branded products through retail and food service channels in New Zealand and overseas.

The company's focus on selling more of its product in chilled form led to positive results, with more than 40% of its prime beef being sold chilled and more than 30% of lamb sales, he said.

Silver Fern Farms will hold its annual meeting in Dunedin on February 15.