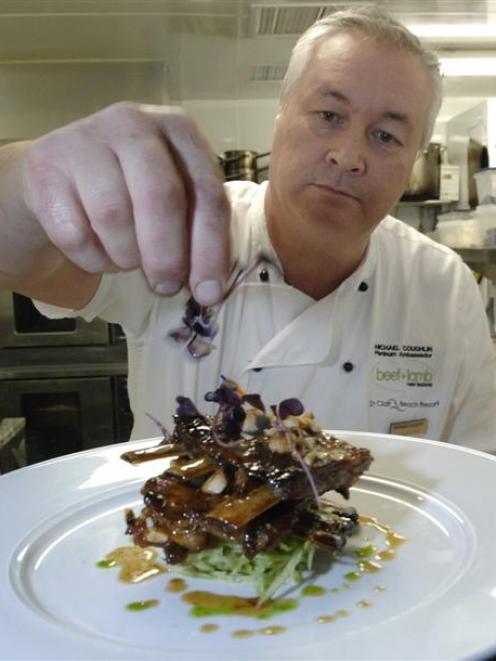 The partnership has been described as an important component in the aspiration to double the current $150 million merino industry over the next five years by unlocking the value of merino meat and co-products, such as leather and lanolin, alongside New Zealand Merino's initiatives to add value to fibre.

"The merino ... is at home with the variable terrain and diet of New Zealand's high country. These characteristics are reflected in a distinct flavour and silky texture that is lean and healthy."

Mr Brakenridge believed merino had the potential to be a "culinary sensation" in select global markets.

Pier 24 executive chef Michael Coughlin was delighted to offer merino on the menu, saying the response had been extremely good, with patrons being both intrigued and interested.

Mr Coughlin, who has worked with merino meat over the years, said a lot of people thought of merino as being stronger.

However, while some secondary cuts might be a bit more robust, the lamb being used was quite subtle, with a reasonably delicate flavour. He said the texture of the meat had a "silky, creamy mouth feel".

He believed it was a "great partnership" between Silver Fern Farms and the New Zealand Merino Company.

So many foods had been regionalised and it was great to be able to start distinguishing between meat cuts, providing a point of difference.

Mr Coughlin believed it was important for consumers to understand the product they were eating and the project told a story, giving them a feeling of where the animal came from and how it lived.

He was among a group of chefs taken to Mt Nicholas Station, a 40,000ha property on the shores of Lake Wakatipu that runs merino sheep, and he described the trip as very inspiring.

"Our goal is to turn the traditionally volume-based sales approach characteristic of the New Zealand lamb industry on its head by pursuing premium opportunities in higher-value micro-markets.

"Part of this shift in thinking involves adding value to cuts traditionally perceived as lesser value. We need to challenge the thinking that we can only ever achieve top dollar for racks and loins."

Silere is Latin for "silent", with the name reflecting the stillness of New Zealand's high country.