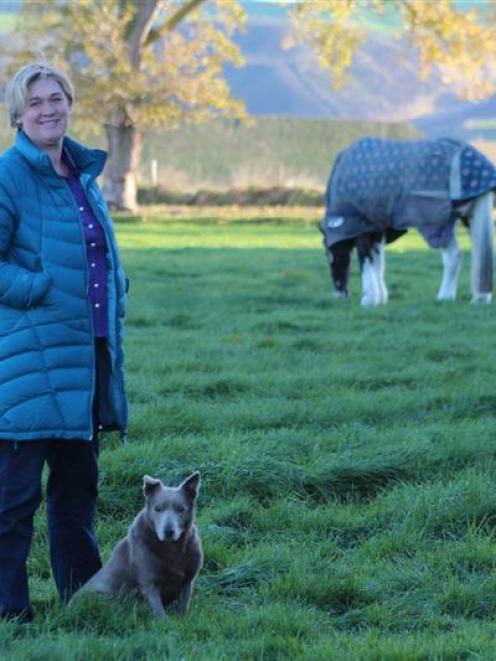 With a declining payout and various other challenges, she went with a friend, mostly to support and connect with her and to have a couple of days away.

But the conference proved to be a ''revelation'' and Mrs Dee (37) became so inspired that she is now the new voluntary convener for Dairy Women's Network (DWN) in North Otago.

Before the conference she did not know much about DWN, which was established in 1998 with the purpose of developing and educating women to add value to the business of dairying.

As a result of the conference, she also signed up for Pathways, a pilot programme aimed at developing confidence among women in dairying.

The aim is for graduates to leave with greater confidence and ability in leading change within business and at community level, identifying their skills and strengths, and influencing and communicating. They will also have a sense of self as a leader, and a goal based action plan.

When Mrs Dee saw the flier for Pathways, it ''spoke'' to her and she realised it was exactly what she needed.

Having two young children, living in a different country for 10 years, changing professions and dealing with different sorts of people meant her confidence had ''taken quite a bashing'', she said.

Growing up in Scotland, Mrs Dee loved animals and used to accompany her accountant father when he visited farming clients at weekends. She was particularly keen on horses.

She worked in the media industry for four years in Glasgow before deciding to come to New Zealand to play rugby, given it had the best women's rugby team in the world, she said.

Rugby was a sport that was in her ''DNA''. Her father, Peter, and uncle Gordon were well known names in Scottish rugby.

Peter Brown notched up 27 caps for his country, including 10 as a captain, and, unusually for a forward, was a proficient goal kicker.

The late Gordon Brown amassed 30 caps for Scotland, along with eight caps for the British and Irish Lions between 1971 and 1977.

Mrs Dee went to Australia for the Rugby World Cup in 2003 and then on to New Zealand for a working year, while a niggling injury was enough for her not to rush back into rugby.

She travelled around New Zealand and did various jobs including working in vineyards, as a horse trekking guide on the West Coast and on a racehorse training property, and getting free surfing lessons in Raglan in return for cleaning hostel cabins.

It was while living on a farm near Waimate, where she was riding horses, that she got introduced to hunting, something she had never done in Scotland, and she decided it could be her ''new adrenaline sport''.

It was at the Waimate Hunt ball in 2004 that she met her future husband, Paul, and he headed back to Scotland with her for Christmas that year.

After growing up in Mosgiel and then doing landscape architecture, Mr Dee had gone dairy farming and was a farm worker at Duntroon when she met him.

He then got a farm manager's job at Morven and Mrs Dee packed everything she owned into a container and shipped it over.

She left Glasgow and ''moved to a little house next to a cow shed in the middle of nowhere''. She fed calves and relief milked that year.

Buying a horse turned out to be an ''absolute turning point'' and she then became involved with the Waimate Hunt Club.

The following year, the couple applied for sharemilking jobs and have been sharemilking ever since, now at Ikawai.

The pair were a good combination, with Mr Dee's dairy farming experience and his wife's business knowledge and computer skills, she said.

With two young children, Connor (5) and Erin (3), some of her friends thought she was ''crazy'' to take on the DWN role, but she felt ''quite lucky'' and she was also very grateful for the support of her husband.

''I do feel very passionate about the support system I can provide for women in the area. I think I'm going to get personally a lot from facilitating the support.''

Rather than her being the ''knowledge fountain'', she believed all dairying women collectively were their own ''massive'' knowledge and support system.

Doing the Pathways programme was at the right stage of her life.

''I'm aware I need new skills and I need to be more aware of the skills I've got, so that was a real eye opener. They focused on supporting you to create change.

''One thing I took out of it, if there is something [that] needs to change, don't start with the solution; start with creating awareness of the problem,'' she said.

Those on the programme were encouraged to take on a six month project and Mrs Dee had chosen to revamp the support system for dairying women in North Otago.

As well as bringing them informative workshops to help with their skills on farm, it was also about an opportunity to connect and be the support system for each other.

A human resources seminar, on developing a team, would be held in the Glenavy Hall on July 1, followed by a calf rearing seminar on July 22.

She wanted to hear from women from Palmerston to Waimate to let them know what was available and find out what training and support they wanted in the region.

With it being a tough year in the dairy industry, support systems were needed ''more than ever'' and she encouraged rural women to have small, community social events, even if it was just catching up with neighbours they had not met.