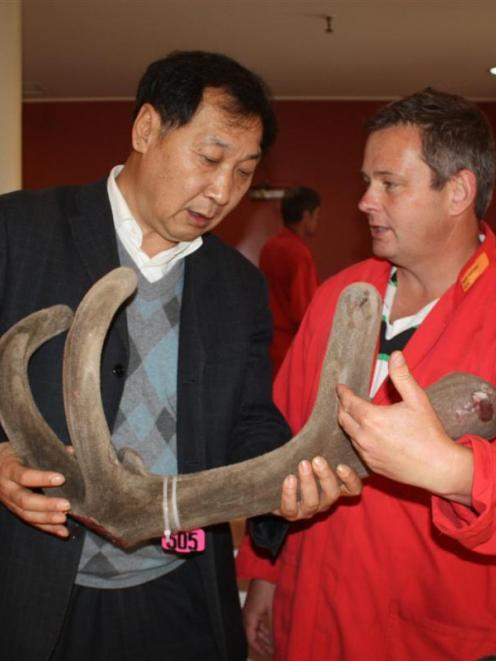 Chinese scholar Quankai Wang, who is attending his third competition, likes what he sees. He pulls banknotes from his pocket and offers to buy a specimen, much to the amusement of competition officials.

''New Zealand deer velvet is number one. It is the best quality,'' Prof Wang says.

The competition, now in its 32nd year, judges the top antler and velvet entries from all over the country that have already done well at regional competitions.

A set of strict international measuring criteria is used, but as one official says, for hard antlers the general rule is ''the more spikey bits the better''.

The competition culminated in a recent awards dinner attended by about 200 deer, elk and wapiti farmers and other associated with the industry.

Deer, elk and wapiti stags grow a new set of antlers every year. Hard antler is growth from previous years while velvet is the current year's growth.

Hard antler has little value, but velvet is worth about $100 per kilogram and sales last year were worth about $28 million to New Zealand farmers.

Most of the velvet was exported frozen in raw form to China and South Korea where it was highly valued for its health benefits and processed into powder to be consumed in medicines and drinks, competition judge and Deer Industry New Zealand marketing manager Rhys Griffiths, of Wellington, said.

Deer by-products such as tails and penises, also prized for traditional Asian medicines, were worth about another $20 million a year in export earnings, he said.

Competition organisers compiled and distributed a glossy brochure of the winning entries, which brought kudos for farmers with award-winning stags and enabled them to get more money for the progeny of those animals, he said.

''The competition tends to fly under the radar a bit, but for those of us who are involved it is fascinating.''

He likened the competition to annual racehorse sales which separated ''the cream of the crop from the also-rans''.

There were 78 entries this year. While farmers prepared all year for regional and national competitions, farmers wanting to enter velveted antlers did not know until the last minute whether they would have suitable entries, Mr Allan said.

Velveted antlers were not cut until December and sometimes were not at their best until after the competitions had been held, he said.

Prof Wang, a professor in the Chinese Medicine Materials College at Jilin Agricultural University in northern China, has been coming to New Zealand regularly since he was a visiting scholar at Massey University's deer research unit in the mid 1990s.

He was in Invercargill as a guest of Deer Industry New Zealand.

He said Jilin University had had its own Sika deer farm for more than 30 years. China did not allow imports of New Zealand deer semen, so New Zealand was the best place in the world for Chinese traditional medicine manufacturers to source velvet and by-products, he said.

Some manufacturers imported velvet and by-products from Russia, but much of that was done through the black market, whereas New Zealand imports were done legitimately, he said.

Prof Wang said the volume of imports from New Zealand had almost doubled in the past decade and he could see it continuing to increase at the same rate ''no problem''.

''I hope the New Zealand deer industry gets bigger and bigger and the relationship between our two countries gets stronger and stronger.''