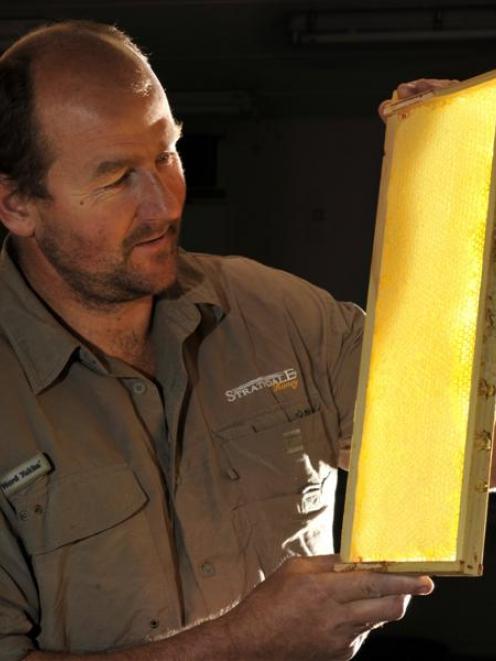 Following a "fantastic" spring - probably the best Mr Dale has seen for at least 15 years - he thought it was going to be a good summer.

But while the cool, wet weather was good for pasture growth and there was lots of feed for stock and bees, it was not good for "little flying insects" who needed warm weather to go and forage.

Strathdale Honey's average annual crop was usually between about 40 and 45 tonnes.

Last year was lean, as it was too dry, and was only between about 18 and 20 tonnes, and this year's crop was "not looking much better".

However, Mr Dale was used to the "ups and downs" of the industry and remained philosophical. Prices were up, demand was up and there were opportunities to build markets, he said.

His earliest childhood memories included hopping into his father's truck after school and heading out into the country to check on the bees.

John Dale started keeping bees in Port Chalmers - "just one hive in the backyard sort of thing" - while working full-time at the wharf.

When he left school, he was either going to be a builder or work with bees. He chose the latter. His father, now retired and living in Mosgiel, is still a regular visitor to Strathdale Honey.

The company has grown to 1500 beehives throughout Otago and supplies certified organic clover honey both overseas - mainly Japan, Singapore and Hong Kong - and to the local market.

The company has been organic since 1993, achieving BIO-GRO certification from the New Zealand Biological Producers and Consumers Council.

Mr Dale loves his work and has a passion for the industry. Being able to take a product from the paddock, through the production process and then "put it in a suitcase and take it overseas", was particularly enjoyable.

Demand worldwide was high at the moment and his phone was "ringing off the hook".

The cool summer in the southern hemisphere meant the crop size was down.

Employing just a few casual staff, Mr Dale is considering contracting out the packing part of the business.

"I have to really focus on my knitting in the next couple of years," he said.

Bees were under pressure worldwide and it was a major issue, not so much for honey production but pollination.