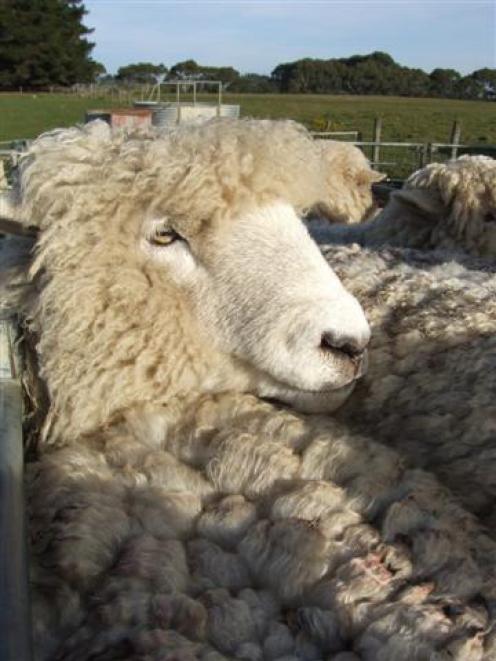 It was the ewe that underpinned the productivity and Dr Hickford believed that the emphasis had come off the performance overall of the ewe.

"I think we've lost sight of the importance of an efficient lamb-bearing system," he said.

He has been involved with Romney New Zealand's Merial saleable meat yield trial, which has been running since 2006.

The project was primarily to show the performance figures of the Romney ewes in the trial and try to improve the meat yield of the lamb carcass and it had achieved both, he said.

At the beginning of the trial, stud breeders throughout New Zealand were encouraged to put forward their best meat-yielding ram and 15 rams were then each put to 60 ewes.

Two seasons ago, a lambing weaned percentage of 165% was achieved, with the first draft killing out at 18.7kg at 13 weeks with a meat yield of 53%, and 66% went off their mothers. There were two more drafts and all the lambs still killed at 53%.

This last season, only seven of the higher end of the rams performing for meat yield were used.

There was a weaning percentage of 185%, with only 6% of lambs lost at birth and 4% between birth and weaning. Sixty-six percent of lambs again went off their mothers at 18.5kg, yielding 53.5%.

Hugh Taylor, from Romney New Zealand, said ewes producing lambs with more than 52% yield had been identified and top-performing rams put over them. Some of the elite ram lambs, from the high-performing ewes, would then be put back over those ewes.

Dr Hickford said robust, easy-care sheep had been a hallmark of the New Zealand Romney and the crossbred ewe was as valuable today as 100 years ago.

The Romney ewe was showing up to be a robust lamb producer and he detected that realisation was occurring across the country's sheep industry.

In the last three years of the trial, the number of lambs hitting the ground had gone from 162% to 195%, which was "remarkable" and not what people expected of Romneys.

Dr Hickford was impressed with the ewes' mothering ability - "they look after their lambs" - saying they were remarkably efficient.

At those weights, the lambs were "on the front foot" in terms of pre-weaning growth, which again showed the ewe efficiency, he said.

Romneys were fast growers, which were crucial for dry hill country systems. If lambs did not survive or grow at a reasonable pace through to weaning, then it was not productive.

In hard, hill country lambing, where farmers could not control the weather or feed supplies, good robust ewe systems were needed. The Romney could do that and have a high yielding lamb, he said.

The meat yield figures were "money for jam" for meatworks - getting 3% to 4% more lean meat on the carcass - and he believed Romneys were "right up there", if not better.

Romneys could also produce good wool and it had been decided to incorporate a wool project into the South Island meat yield trial ewes, with a five-year trial starting.

The target was to pull it back to 36-38 micron and improve the curvature.

A company, Romney Rugs, a 50:50 joint venture between Romney New Zealand and Wool Equities, has been formed and is selling rugs into the US.