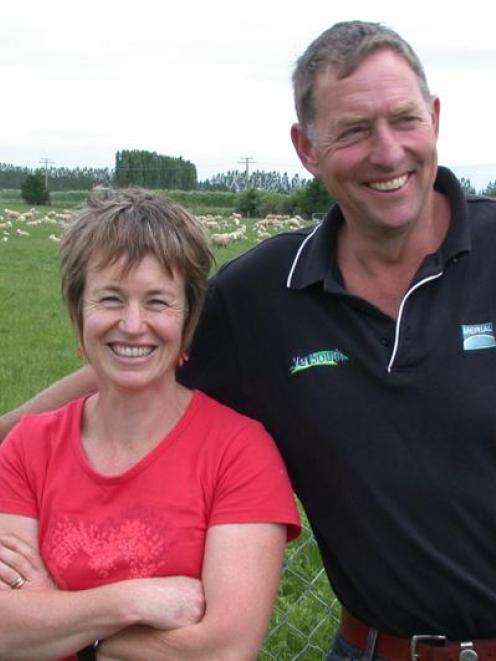 Fiona and Nelson Hancox want to see restructuring of New Zealand's red meat industry. Photo by Neal Wallace.
West Otago sheep and beef farmers Nelson and Fiona Hancox want farmers to ''stand up and be counted'' and take charge of their futures.

The couple, who are both passionate about the red meat industry and are involved with various groups and industry bodies, believe it is time for farmers to take control.

Mrs Hancox was nominated to attend the 2014 Rabobank Global Farmers Master Class in Australia next month, where she would have been joining farmers from around the world.

But her commitments to the Agri-Women's Development Trust's Escalator governance and leadership course meant she was unable to attend.

Her husband was now going to Australia, with

It is made up of three farms, with the focus on sheep and beef breeding and fattening.

The couple have won several farming accolades over the years, including the Rabobank Lincoln University Foundation South Island Farmer of the Year award, Clutha district farmer of the year award and the national ewe hogget competition.

They wanted to continue to grow their business and could see ''a real future'' for the industry.

But they were also prepared to stand up and say that things going on in the industry and inefficiencies were costing farmers, Mrs Hancox said. Until those issues were resolved, sheep and beef farms and people involved in the industry would continue to be lost to alternatives, she said.

Restructuring and consolidation of the industry was needed and the only way to start that was through what farmers owned - the co-operatives - and other players needed to be encouraged to join, she said.

Mrs Hancox is an executive member of Meat Industry Excellence which has been seeking industry reform. She is also a farmer representative on the Beef and Lamb New Zealand Southern South Island Farmer Council.

New Zealand was still the world's ''number one'' producer of lamb and venison and fifth for beef.

There was huge global demand for protein and safe food and that was something New Zealand did very well, she said, also citing the nutritional benefits of grass-raised red meat.

Farmer ownership was very important for farmers to get the returns they needed.

There also needed to be a change of attitude and it should not be an ''us and them'' battle between farmers and processors. Instead, both should work together to get maximum returns.

''It's going to have to be a better team effort, with two-way communication so both businesses are profitable,'' she said.

That would then mean processors could invest in their businesses and farmers could do the same with theirs.

The first step was the upcoming co-operative director elections. People were needed around the board table who would promote those discussions, she said.

There were sheep and beef farmers struggling to ''make ends meet'', let alone think of succession, an important priority for Mr and Mrs Hancox, who have four children.

A trip to Europe and the UK in the mid-2000s, after winning the South Island Farmer of the Year competition, proved to be a turning point for Mr Hancox.

Farmers were getting out of sheep and beef and going into dairying. He thought that was a reason to expand his family's sheep and beef operation and it had basically doubled since then.

He started farming during the tough times of the early 1980s and learned to ''dig deep'', along with learning how to manage debt.

The Hancox farming operation had always made a profit during those 30 years.

He was looking forward to the trip to Australia, saying it was about networking with others and finding out about the issues they were facing.

''I'm just interested to see what the rest of the world is doing,'' he said.