Skip the sheep can shake a leg again 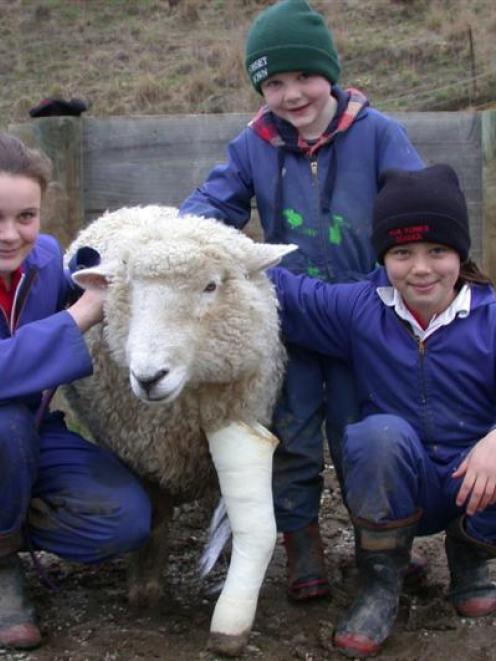 Sarah (12), Logan (4) and Megan (8) Dodd with Skip the sheep. A cast from her broken leg is propped against her. Photo by Sally Rae.
First Tarras had Shrek - and now Tapui has Skip.

And if Skip the Romney ewe was a cat, she would probably be down to about seven lives.

Farmer John Dodd did not think the little triplet, born on a cold and frosty night in rural North Otago, would survive its first night if left outside and took her home.

Skip became eldest daughter Sarah's pet, placing second at the North Otago A and P Show and winning first place at the A and P association's pet day.

She also walked down the main street of Oamaru in the Christmas parade and was "quite special" - "we think so, anyway", Wendy Dodd said.

But the odds were looking stacked against Skip in April this year when the ewe broke a leg while jumping a gate in the sheep yards.

By the time Mr Dodd got to her, he had heard a crack.

The break was above the knee and, as far as he could see, there was "only one option" - Skip's skipping days were over.

But the rest of the Dodd family were not so convinced and a vet, on the property to pregnancy test cows, was asked to take a look at Skip.

While it was initially thought an operation and pinning of the leg was required, it was then decided to put a cast on it.

Two X-rays and two casts later - including one green cast which came back from the vet clinic with pink love hearts on it - and Skip had made a "remarkable recovery", Mrs Dodd said.

After the cast was removed "she did this massive skip in the paddock", Megan Dodd said.