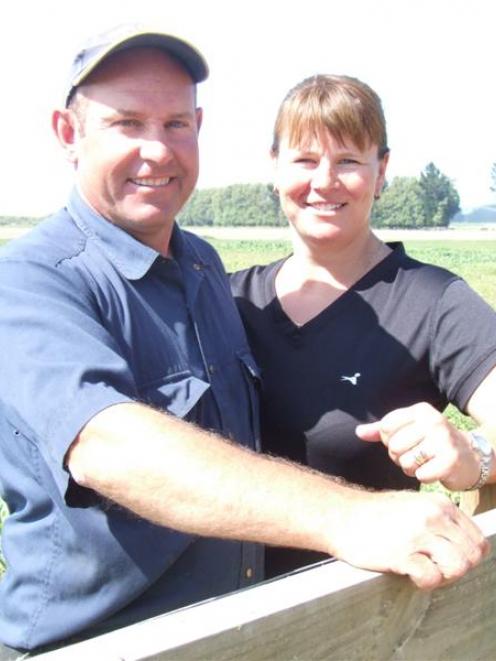 Geoff and Katrina Taylor at home on their North Otago dairy farm. Photo by Sally Rae.
At Willowview Pastures in North Otago, staff are considered an integral part of the business.

Employees were given responsibility for particular on-farm tasks, described by Mr Taylor as their on-farm ''niche'', but still kept up with what was happening farm-wide.

Regular meetings were scheduled, providing an opportunity to outline objectives, keep up to date with overall farm production and raise any issues. Formal training was also a critical part of the strategy.

''It's very important to keep everybody involved in the business rather than being employer-employee,'' he said.

Mr Taylor, who has high expectations of his staff, believes communication is ''incredibly important''. He said the regular meetings worked well and meant ''everyone's on the same page''. He considers himself a hands-on employer, preferring to be one of the team.

In 2012, staff member Zach Graham was named the most outstanding modern apprentice at the South Canterbury-North Otago regional AgriAwards, run by Primary Industry Training Organisation (Primary ITO), while Mr Taylor, nominated by Mr Graham, was selected as regional farmer trainer of the year.

Such training opportunities were not available to Mr Taylor when he started out in the dairy industry more than 20 years ago.

His parents, Mark and Diana, bought the 240ha property about 40 years ago, after emigrating from England.

Mark Taylor worked two jobs, including at the local freezing works, to be able to afford the coastal property and farm sheep.

After leaving school, Geoff Taylor worked for farmer and fisherman Bill Pile on a fishing boat before heading to England for two years. He worked as a shearer and experienced Europe.

Although he was always interested in farming, the late 1980s had been ''pretty tough going'' and the decision was made to sell the sheep to buy 160 dairy cows. The property was converted in 1992 and it now runs 670 Friesian and crossbred cows.

The farm was initially split in half and Geoff and his brother Andy shared one cowshed, milking their respective cows separately.

They were in partnership for about six years before Andy headed south. He and his family were now dairy farming at Winton.

Geoff Taylor acknowledged converting to dairy was a ''big call'' for a family that previously knew nothing about it.

But his father had also shown ''great insight'' with the decision, which allowed two sons to stay on the land.

During his early years in dairying, Geoff Taylor received much helpful advice from other farmers and that sort of collegial support was still prevalent in the dairy industry, he said.

The open nature of the industry was one of the first things he noticed - ''everybody told you exactly what the story was'' - and was one of its strengths, compared with the sheep industry, he said.

Mr Taylor, who has no formal qualifications, believed the industry could do a lot more work in supporting schools, promoting farming and letting young people know there were opportunities available.

Not everybody had to go to university to do well, he said. His farming background meant the ''common sense stuff'' was second nature. Staff training was part of the Taylors' commitment to the dairy industry: it enabled staff to perform their tasks competently and with a high level of understanding.

''There's no doubt about it, training works, from a practical point of view as well as from the theory side.

''The good thing about ITO is that [trainees] learn about things in class and so are able to ask questions on-farm and able to understand why we do what we do. It's fantastic what they're learning.

''I thoroughly enjoy it when young people, well, they don't have to be young, get more knowledge and better themselves. If I can't do something to improve their future, I'm not doing what I should be doing.''

Mr Graham (21) is now in his third season working for Willowview Pastures. Although he studied agriculture at school, he had not previously been on a farm.

However, he was looking for work, decided to ''give it a crack'' and has been working for the Taylors ever since, while continuing his ITO studies.

Two other permanent staff make up the regular farm team and have been working with Mr Taylor for 15 and six years respectively. Both this season and last season, Lincoln University students worked on the farm over summer.

The good part about have a stable team was being able to learn everyone's strengths, Mr Taylor said. Obviously, he wanted to retain staff, but if they did move on, he hoped they had bettered themselves for that next job.

Mr Taylor believed in helping others.

''Somebody might help you; you may never ever be able to repay that person but somewhere down the track you can help somebody else,'' he said.

He was very excited about the future of the dairy industry, which he said had ''a lot going for it''. Viewed in hindsight, the development work done on the property had been huge.

''When Dad first came here, there was one building on this land and no irrigation,'' Mr Taylor recalled.

Mark Taylor had to dig a hole with a front-end-loader to find water for the sheep. Now, there was ''water all over the plains'', Geoff said.

Latterly, the Taylors had moved away from border-dyke irrigation, which Mark Taylor installed, to pivots, and new cow sheds would be considered in the future.

Technology was becoming more important in the industry and staff were going to have to be more technically minded, he said.

The environment was a big focus and trees cut down to make way for pivots had been replaced with extensive planting.

''We're very interested in the environmental side of things and making sure we're doing the utmost we can, as well as making money,'' Mr Taylor said.

''At the end of the day, anybody who is farming is only a caretaker of the land for the next generation.''

The couple had three teenage children and, ''fingers crossed'', there would be another generation of the family involved in the agricultural sector, he said.