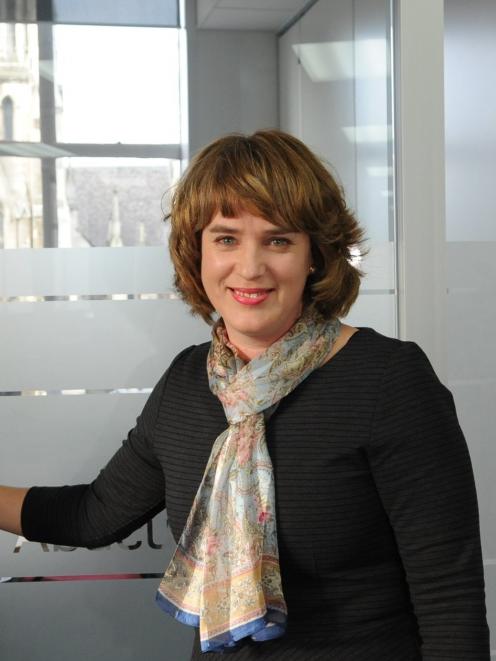 Dr Anna Campbell at work at AbacusBio in Dunedin. Photo by Linda Robertson.
Anna Campbell has returned from a recent trip to China buoyed by the opportunities that she saw for New Zealand's red-meat sector.

Dr Campbell, a consultant at AbacusBio in Dunedin, described those opportunities as "extraordinary".

She was in China for two weeks, firstly attending a Harvard agribusiness course in Shanghai focused around global agribusiness opportunities, which attracted 60 people from around the world, although she was one of only four women.

She also spoke about Alliance Group initiatives in livestock productivity and meat quality, and the company's involvement in the Beef and Lamb New Zealand central progeny test.

Follow-up discussions were already being held with both Grand Farm and the North East Agricultural University, allowing future research and development to be tailored to the needs of that "crucial" market, Dr Campbell said.

Alliance Group had had a 12-year business partnership with Grand Farm, which was based mostly in northeast China and supplied all the big supermarkets in China, she said.

It was an opportunity to understand their business and the potential for growth, and see the relationship between Alliance Group and Grand Farm, which was "pretty special".

It was also an opportunity to gain a better understanding of how lamb was presented at retail level and learn what the Chinese consumers wanted.

Grand Farm was also focusing on the Western market within China, which was growing, and there were "some pretty big opportunities".

Issues around food security also stood New Zealand in very good stead for hitting the top end of the market, she said.

The Chinese were keen to hear about genetic work being undertaken by AbacusBio and Beef and Lamb New Zealand, with support from Alliance Group, while the Hoofprint programme was also of great interest to Grand Farm, she said.

Alliance Group has now made Hoofprint progressively available to all of its suppliers.

What was also exciting was that the same data could be used for farm performance and the potential for benchmarking was "really exciting", she said.

AbacusBio was now working with Alliance Group to make sure they understood the key elements that farmers were interested in from a benchmarking perspective.

Suppliers would be invited to register their interest in Hoofprint and undergo a training and induction session, and there would be a phased roll-out of the programme.

The company planned to offer Hoofprint to its partner processors in the UK next year.

Funding announced recently from Vote Science and Innovation would allow a postgraduate student to work on the Hoofprint programme.

AbacusBio was among 70 businesses named by Science and Innovation Minister Steven Joyce to receive funding of $2.1 million to employ graduate students for a minimum of six months to undertake innovative research and development work.

Working alongside the meat industry was a far cry from where Dr Campbell started out in her career, working in plant genetics.

After completing a science degree in botany at the University of Otago, she embarked on a PhD in cereal biotechnology at Lincoln University and Crop and Food Research.

After completing her PhD, she worked in the heart of the wheat belt of Australia, for the University of Southern Queensland, where she discovered DNA markers for wheat quality and disease resistance traits.

She returned to New Zealand in 2001 to work as a scientist at AgResearch Invermay, where she ran DNA marker discovery and validation programmes in sheep meat quality and yield.

The main driver of her move to AbacusBio - a consultancy and new-venture development company - in 2006 was to become more commercially focused.

Career-wise, at the moment, she was probably as excited as she had ever been, she acknowledged.

The company employed about 25 staff and it was a growing success story.

The main focus was getting science into business.

While bridging that gap, it was also about understanding what clients wanted out of science, Dr Campbell said.

About 30% of the company's work at the moment was international.

Global issues around food security, production and environment were not going to go away, "which is really our space, which is pretty cool".

Science and technology were increasingly important for environmental issues, she said.

Meat quality had been a major focus for her and she started working with Alliance Group while at AgResearch, on the central progeny test.

A lot of work was being done in understanding what consumers wanted and understanding forage and genetics, and ensuring there were no negative effects on meat quality.

Dr Campbell said she was brought up with the value of farming and agriculture.

The industry needed to focus on doing business well, growing its exports and growing its value.

The mother of three led a busy life and she was grateful for the support of her husband, family and friends.

She loved Dunedin, saying it was fantastic from a family perspective.

From a business perspective, she sometimes felt the city could be a little bit more "business positive".

She wanted her children to grow up and know there were exciting opportunities for them in Dunedin, she said.