Woollen coffin a hit at show 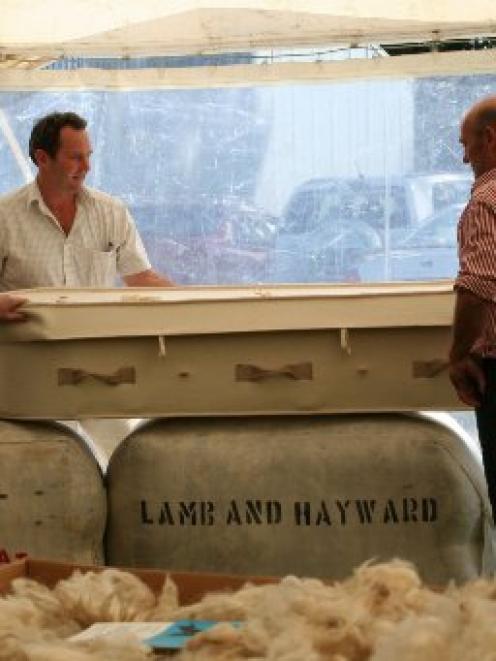 When Polly McGuckin was approached by the convener of the wool section at the Sheffield show to see if she would like to have a woollen coffin on display, she was initially not sure it would be appropriate.

Mrs McGuckin, from Darfield, has the rights to import the coffins from the UK, where they are hand-made and assembled in Yorkshire by specialist textile company Hainsworth.

But she raised the suggestion during a meeting with Christchurch-based funeral directors Lamb and Hayward and they were very supportive.

Jonathan Cullen, from Lamb and Hayward, admitted it was "a bit of an unknown", in terms of it being a new concept, and it was hard to gauge what the reaction was going to be.

The casket was placed on top of a bale of wool and show visitors were "wowed by it", Mr Cullen said.

He estimated about "99%" of people thought it was a great idea, particularly the older generation.

People saw it being a great use of wool.

The casket would be added to Lamb and Hayward's range of more eco-friendly caskets. It was in the low to mid-price range, compared to traditional caskets, he said.

Since publicity about the woollen caskets last year, there had been very positive comments. People were looking at "eco-everything and the green side of things" and Hainsworth was forecasting it would be the biggest percentage of their product within their next five years, Mrs McGuckin said.

New Zealanders were passionate about wool. Having the coffin on display at the A and P show also helped remove the mystery side of the "whole coffin and funeral home thing".

She was surprised by how many people wanted to look inside and touch and feel the coffins, while some took photographs.

"People can see it's not such a scary thing," she said.