Beef cattle have long been a passion for Natalie Howes.

Mrs Howes (29), nee Marshall, grew up on a farm at Taramoa in Southland where her family have the Benatrade Angus stud.

It was a natural progression for her to become involved in both showing and judging cattle.

She travelled to Australia several times, including as the recipient of the New Zealand Angus transtasman scholarship.

After completing her secondary schooling, Mrs Howes was intent on studying veterinary science but she wanted to add to her farming skills.

So she spent three months in rural Australia and also did an artificial insemination course, which led to some AI work on dairy cows for LIC. She also worked on sheep farms.

In 2007, she headed to Massey University to study veterinary science, but she struggled in her first year and decided to switch to science.

While she had wanted to be a vet to work with cattle, the reality was she was not going to be able to spend all her time with cattle as a vet, she said.

She had also become interested in embryo transfer and reproductive technologies and she decided that research was her better option.

So she stayed at Massey and studied agriculture through the science element, with animal science as her major.

Staying on for honours, she did a research project with AngusPure, looking at the effects of gender, pH and change of temperature post-slaughter on meat quality.

She finished her honours degree in the south as, by that stage, she had met her future husband, Martin Howes.

Midway through her honours year, he had shifted to Southland to manage a dairy farm. He had previously been studying for his master’s degree part-time, while managing a farm full-time. 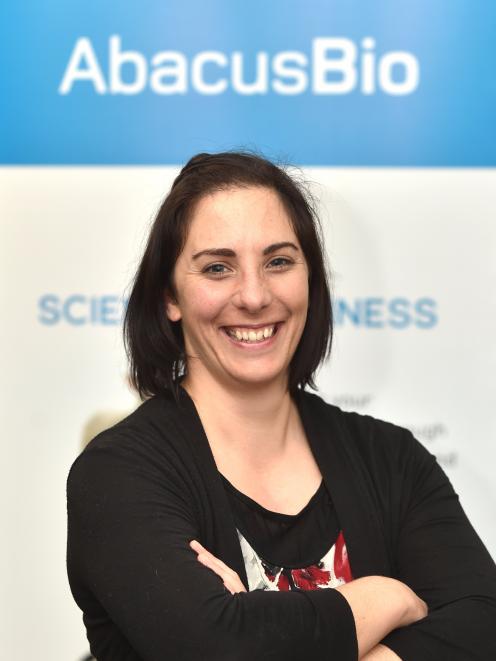 He dropped his master’s to move south and, a few months later, Mrs Howes joined him and finished her honours degree from home in Wendonside.

‘‘I did that from the backblocks of Southland,’’ she laughed.When she graduated, she got a job as a technical sales representative for PGG Wrightson, covering Eastern Southland and West Otago.

She needed experience and she wanted a job that would give her a better understanding of what farmers were achieving.

She had about 100 clients, a mix of dairy and sheep and beef, and also hill country and flat properties, and it taught her a lot.

While discovering that she was ‘‘not really a sales person’’, she enjoyed the relationships, being on farm and interacting with farmers.

After two years, she applied for a job at Dunedin-based agribusiness consulting company AbacusBio. Although unsuccessful, she was asked if she willing to take on a PhD.

The next few weeks were something of a whirlwind. She resigned, got engaged and then married three weeks later, organising a wedding in just 10 days, arriving in Dunedin three weeks after the wedding.

The wedding was in a paddock and the beauty of doing it within 10 days was that it fitted in to the 10-day weather forecast, meaning the weather was fine, she laughed.

Since being married in March 2013, Mrs Howes quipped she had been ‘‘driving ever since’’, spending Monday to Friday in Dunedin, where she flatted, and returning to Southland at weekends.

Mr Howes manages a dairy farm at Castlerock, a two and a-half hour drive from Dunedin, a role he really enjoyed. ‘‘He loves it. He loves dairy as much as I love beef,’’ she said. He works for the Ferris family (Sirref Corp Ltd) and spent a few years at the family’s home farms in the Waikato before he started his degree at Massey.

As well as managing the Castlerock farm, which has 1100 cows, he  has an equity partnership with Sirref and various other entities in a 1000 cow 50:50 sharemilking business at Wendon.

He managed Wendon for four years, after Wendonside, and shifted over to Castlerock this season. Mrs Howes’ PhD at the University of Otago was in food science, studying the effects of diet and genetics on lamb meat composition.

It was in collaboration with Alliance Group, Headwaters Ltd, Beef + Lamb New Zealand Genetics and Agricom, and looked at improving the fat profile in lamb.

Most of her time was based at AbacusBio’s office, while she also used the university for facilities and supervisors, and the project involved some travel for trials.

She intended completing her PhD by the end of the year and it was a project that she remained enthused about, which was probably because of the commercial aspect and what it could do for farmers and the industry, she said.

There were ‘‘huge’’ flow-on effects and it was nice to be working on something that had real, practical effects.

It was also quite a diverse project as she was using some of her plant agronomy and plant knowledge, along with the animal aspect, and she also enjoyed looking at nutrition from a human health point of view.

Mrs Howes treated her PhD like a job and it was great having the team at AbacusBio to bounce ideas off, she said. Beef was still her passion, from all aspects, and she was keen to get into beef research in the future.

She was very grateful for the opportunities  she had had over the years, from her involvement with the Angus breed to her clients at PGG Wrightson and latterly the support at AbacusBio — ‘‘you get a little bit of info from everyone’’, she said.

While married for three and a-half years now, Mrs Howes joked that the couple had not spent much of that time together.

They did manage to fit in a holiday to South America earlier this year.

And if she needed a hands-on beef cattle fix, she could ‘‘still go down and play with cows’’ on the family farm.

She and her father, Dave, talked about the direction of the stud, breeding wise, including which genetics he was planning on using.

While the Marshall family no longer showed their cattle, it had been a very good experience for her. It taught her a lot about public speaking and, while in Australia, she virtually learnt to be a ‘‘hairdresser for cows’’, she quipped.

‘‘We’d get up at 3am every morning to prepare them... there would not be a hair out of place. It was such a good experience,’’ she said.

Passionate about the agricultural sector, Mrs Howes often spoke to school pupils as part of Futureintech, an Institution of Professional Engineers New Zealand (IPENZ) initiative and funded by the Government through Callaghan Innovation and the Ministry for Primary Industries.

The programme’s main focus was in bringing people, who already worked in technology, engineering and science-related industries, into schools, with the aim of increasing the number of young New Zealanders choosing careers in those fields.