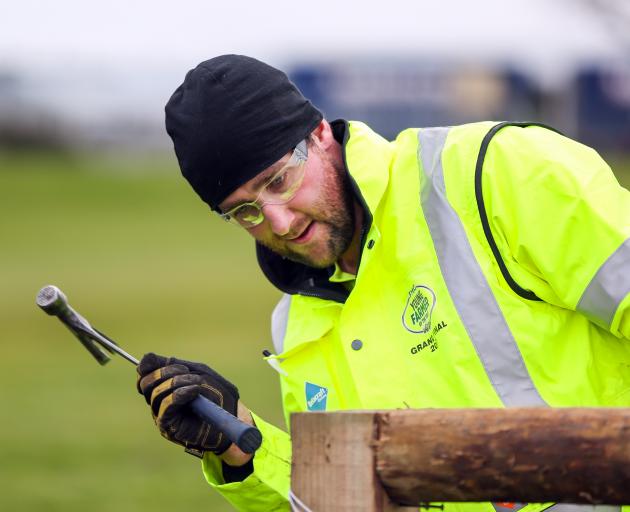 Sheep and beef farmer Nigel Woodhead was named Young Farmer of the Year on Saturday night after three days of intense competition spread across Palmerston North and Feilding.

Winning the event was ''unbelievable'' given the high standard of the six other finalists he was facing, Mr Woodhead said.

As a child, he watched the competition with the rest of the Woodhead family, and he was following in the footsteps of his father, Stephen, Otago Regional Council chairman, who had competed in the event.

''It's still in the process of sinking in, to be fair,'' Mr Woodhead said.

The three days of intense competition included a surprise mock car crash, which he said was the most challenging part of the competition.

''A lot of what the Young Farmer of the Year grand final is about is problem-solving,'' he said.

''They throw a lot of things in front of you to throw you outside your comfort zone and see how you handle your pressure.''

Mr Woodhead, who has a bachelor of agricultural science degree, worked at Midlands Seed in Ashburton for five years before heading home to the family farm, which he rented from his parents.

He had 3500 stock on the 400ha property and strived to be among the top 10% of farms in New Zealand, while looking after the environment.

''We just try to do the basics and do them well.''

He thanked his parents, wife Leanne and friend Olivia Ross for contributing to his success.

New Zealand Young Farmers chief executive Terry Copeland said Mr Woodhead was the epitome of what future leaders in the agri-sector needed to be.

''Nigel is an inspiring future leader who showcases the exceptional leaders we strive to develop,'' Mr Copeland said.