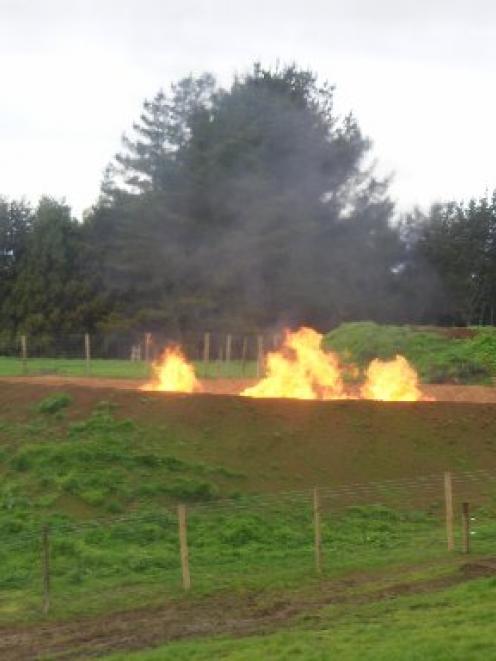 Todd Energy's mandatory flare pit at its Mangahewa C drilling site. Photo by Simon Hartley.
Fracking for oil and gas around Otago and Southland is probably many years away, but the Taranaki Regional Council (TRC) has been dealing with the contentious issue for decades.

The annual $2 billion oil and gas industry in Taranaki hosts 62% of New Zealand's 638 wells - 470 onshore and 168 offshore - boosting to thousands the number of jobs in the region.

With TRC leading the way in the consenting process, providing a working model which other councils could consider adopting, environmentalists and anyone concerned about aquifer contamination could be in for a shock.

TRC charges $50,000-$60,000 for site monitoring, which could include fracking, $8000 for monitoring a three-month test well and $20,000 annually to monitor the established production sites.

So far, there have been 43 wells subject to 69 incidences of hydraulic fracturing, or fracking, in Taranaki, which only since 2011 have required resource consents from the TRC.

There have been 20 resource consents for hydraulic fracturing issued since 2011, but none was publicly notified, TRC director of resource management Fred McLay said.

''The key to hydraulic fracturing is well integrity. Getting the drilling, casing [pipes] and cementing right is what matters most,'' he said.

Consents were required from 2011, as legal opinion to the TRC was that hydraulic fracturing was considered a ''discharge to land'', albeit at great depths, so should be consented.

The fracking process is contentious for several reasons: the vertical drilling and pipe crosses horizontal water aquifers; toxic chemicals are in the mix of fracking fluid; and there is treatment of waste fracking fluids which return to the surface, with the potential for spills above ground.

Critics point out the intense toxicity of some chemicals which make up the 2% of the mainly mud and water fracking fluid. Fluid users counter the chemicals are hugely diluted and are in fact akin to household chemical products, which ultimately go down the drain.

Aquifers crossed through at a depth of 300m-500m, while vertical drilling goes beyond to depths of 1000m, plus up to a further 2km-3km of horizontal drilling.

In considering resource consent applications for hydraulic fracturing, Mr McLay said ''key'' to whether the application would be notified publicly or not was if ''affected parties'' were deemed actually directly affected.

The Otago Regional Council has no fracking applications before it, and maintains it will take guidance from the Resource Management Act, which first considers ''affected parties'' and environmental effects.

In Taranaki, because all 20 consents for hydraulic fracturing were for wells deeper than 3km, Mr McLay said they were not publicly notified.

''Because the hydraulic fracturing was about 3.5km underground, the effects are less than minor, because of the depth,'' he said.

However, he was aware environmentalists, and members of the public had ongoing concerns about potential aquifer contamination; people who would be deemed ''interested parties''.

His response was that those critics go online and read all the publicly available TRC monitoring reports, and also Parliamentary Commissioner for the Environment Jan Wright's interim report on fracking in New Zealand, released last November.

''We want transparency and all monitoring is made publicly available,'' Mr McLay said.

He defended the decision on non-notification to the public, saying there was widespread consultation by the TRC with the community and iwi. In 2011-12, there were 234 non-notified consents across all activities dealt with by the TRC, with 577 community consultations and 117 consultations with iwi-hapu.

''The oil and gas sector is not a special case. We apply the same consents and monitoring to dairying, poultry or pigs,'' Mr McLay said when interviewed.

However, he believes the peak oil theory now takes a back seat while fracking releases more oil and gas, thus replenishing global energy stocks, and gives more time for renewable energy sources to be developed.

Todd Energy operates the Mangahewa C production facility near Stratford in Taranaki, a ''pad'' where the largest onshore rig in New Zealand is drilling four holes (which eventually turn from vertical drilling to horizontal) up to 5km in length.

Spokesmen on-site said ''most'' of the wells would be considered for fracking in the future, given that the condensate and gas was trapped in less porous rock, at depth.

Capturing oil and gas by fracking is referred to as an ''unconventional'' method, as opposed to solely drilling, and letting underground pressure, or introduced displacement fluids, force out the product.

''Unconventional is going to become the conventional method in the future,'' Mr Robinson said.

Once the horizontal pipe is perforated, leaving a 200mm-long hole into the surrounding rock, fracking fluid is pumped into the pipe at about 8000 pounds per square inch, which fractures the rock for 50m-60m beyond the pipe, which releases the gas and condensate.

He noted a nearby gas-fired ''peaker station'' for electricity was the ''perfect complement'' to renewable energy sources, as it can be turned on and off almost instantly to boost energy levels, should wind or hydro production be low.

Nearby, Tag Oil operates the 12-well Cheal condensate and gas plant, which splits out the two products from water, which is screened and then heated and returned down the pipe to increase pressure. About $100 million has been spent on the plant, including $40 million in a recent upgrade for new production, of which about $35 million was spent in the region.

The plant's output, which will accommodate eight new wells nearby on a second pad, equals about 2000 barrels of oil per day, in gas and condensate; a high grade oil type which is exported for refining and is a higher quality than the imports to Marsden Point for refining.

Oil companies and environmentalists have fought themselves almost to a standstill, each claiming irrefutable evidence on whether or not fracking contaminates aquifers or causes earthquakes.

Regardless of what assurances, statistics, data, oversight or monitoring arrangements are put forward for fracking, a growing number of environmentalists will simply be saying ''No'' on the basis risk outweighs any benefits.

Forest and Bird have challenged the courts to accept that climate change issues should be included in West Coast coal mining resource consent applications, with a decision yet to be released. Fracking in the South appears years away, if at all, with no companies actively exploring for oil and gas onshore.

The question arises whether the public or environmentalists in the South would accept the TRC's model of no public notification because the work is 3km underground, and therefore has no affected party.

Reporter Simon Hartley was hosted to Taranaki by Pepanz, whose members include Todd Energy and Tap Oil.