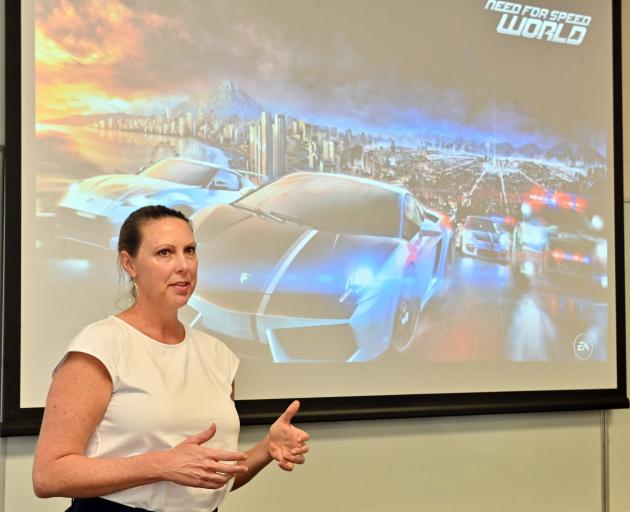 International game developer Tabitha Hayes speaks to about 30 summer school students at the University of Otago yesterday. Photo: Linda Robertson
Dunedin's gaming industry should go off like a rocket if it is able to attract the right people.

‘‘Dunedin is really in the formative stages of its evolution as a digital and games centre, but the basics are there in the form of available capital and ready access to a large base of talent at university and polytech level,’’ the Stockholm-based games marketer said.

Ms Hayes and her husband, EA Games producer Adam Clark, are visiting the city this week with the support of the New Zealand Centre of Digital Excellence.

‘‘When I think about gaming now, it is a very different profile and image and it has certainly moved away from players in a dark room on their X-Box.’’

Ms Hayes said while her commercial focus was on reaching millions of girls and young women through Star Stable’s multiplayer role-playing game World of Horsecraft AB, the global market was changing at an ‘‘incredibly fast rate’’.

‘‘The challenge for relatively new entrants like New Zealand, is keeping up with the shift to Gen Z players, building amazing and interactive experiences for them.’’

Within that context, the industry also had to be more diverse and inclusive in its approach, she said.

‘‘Two and a-half billion people play games. They can pick from about 900,000 on IOS or 350,000 Android options, so when I talk about inclusion, it is not just about gender inclusion, it is about people who are 55 or older, like my mum, who also enjoys playing online games.’’

She said the hurdle for New Zealand was how to include that age group and develop its own unique story, to build into a billion-dollar industry.

‘‘A lot of what we do in the games environment is about telling a story. So the big challenge — like with New Zealand films — is how we create opportunities to tell those stories.’’

Video games is a powerful medium for that, she said.

‘‘When we are more inclusive about the stories we tell, then we will attract more people. That’s why we focus a lot on bringing more story-tellers into gaming and creating an environment where they are heard, they are seen and they feel empowered.’’

Mr Clark said, at their essence, games were about exploring and discovery, but not every game appeals to everybody.

‘‘Mobile games are the big opportunity out there. International companies are looking for the right mix, to be relentless about quality but not to offend or alienate any specific groups — so it can be a real delicate and fragile thing.’’