By Riley Kennedy
0 Comments
There is nothing else Alex Hodge would rather be doing than designing and the emergence of virtual reality has reignited that passion. The Mosgiel man talks to Riley Kennedy about designing real-world products in a virtual world.

Alex Hodge’s life is full of product design — so much so his family’s cat is called Pixel.

When the Mosgiel man is not designing fireplaces between 9am and 5pm, he is most likely in the front room of his house using virtual reality (VR) to design paintball guns for overseas manufacturers.

"Designing is not really a hobby anymore; more of a full-time job I can’t get away from," he said.

Born in Auckland, Mr Hodge (36) grew up in Dunedin and attended The Taieri High School, now Taieri College. It was there he got his first taste of design.

Initially, he had wanted to study architecture but realised the scope was very narrow — "you end up just doing houses really".

After studying graphics at school, he realised product design was his calling because the depth of work was greater.

"You end up getting to work on vehicles, products and all sorts of things," he said.

After leaving secondary school, he studied product and industrial design at Otago Polytechnic.

Most consumer products — "whether it’s a pen to a car to a TV or a computer" — were designed by someone.

"There is always someone behind the product and, once I realised that, I knew what I wanted to do," he said.

After graduating in 2006, Mr Hodge joined fireplace manufacturer Escea as its product designer and marketing lead. That continues to be his "day job".

About eight years ago, he went to stag do and realised the paintball guns used could have been designed in a "nicer way".

So he designed his own gun and posted it on social media. He was approached by two United States paintball gun manufacturers who wanted to buy it.

He spent several years freelancing for various companies and, five years ago, started working exclusively for US firm HK Army — one of the world’s largest paintball and equipment clothing companies.

Mr Hodge admitted he had had no interest in paintball before he attended the stag do.

His work was all done in virtual reality, which he described as a "game-changer".

A room in his house was set up for VR with three large computer screens and a wide space for him to walk around in.

VR is a computer-generated simulation of a 3-D image which is interacted with at real scale via electronic equipment, such as a headset and gloves fitted with sensors.

Mr Hodge said VR allowed him to be "inside the design process".

"It’s really hard to describe but, when you have those goggles on, you’re right there with it," he said.

The design process for the paintball gun took about two weeks. From design to production was about six months.

It started with a loose sketch which then became a detailed drawing before the "more serious stuff", such as engineering, started. After that, the design files were sent to art directors in the United States.

Mr Hodge then tested prototypes at Combat Zone Paintball in Dunedin or "sometimes in the backyard". 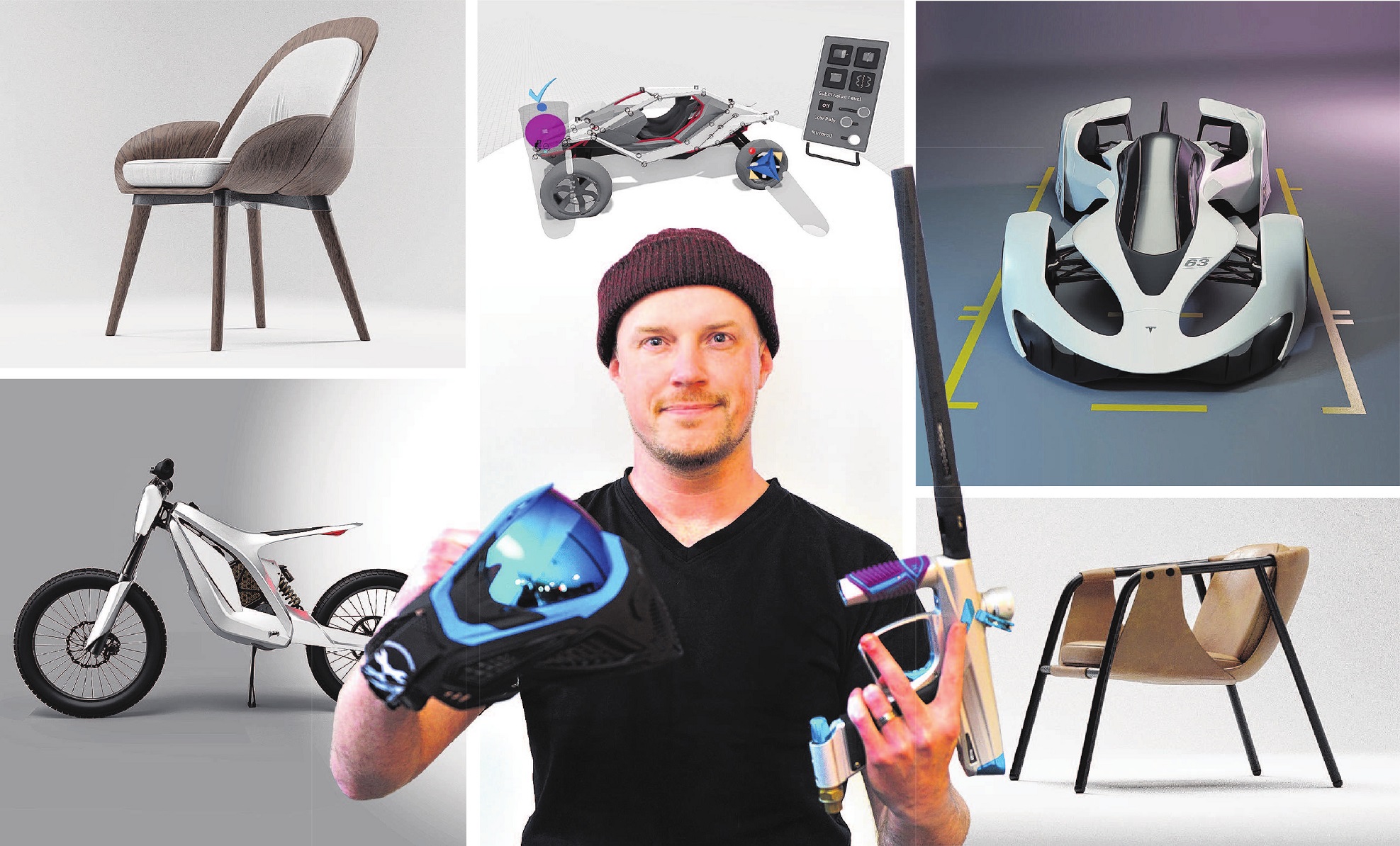 Product designer Alex Hodge, of Mosgiel, surrounded by products he has made in virtual reality. PHOTOS: CHRISTINE O’CONNOR/SUPPLIED
The best part was the end result of a customer-ready product.

"There is nothing better than that," he said.

Before VR, the first sketches had to be completed on paper and sent overseas to be approved by the directors.

After that, 3-D models were made on a computer and again had to be approved before 3-D prints were made.

"There was a lot of back-and-forth and it was very slow," Mr Hodge said.

VR cut out most of that process because the model was created in a 3-D space, which art directors overseas could access at the same time.

Looking back 15 or 20 years ago, working from home in Mosgiel might not have been possible due to slowness, Mr Hodge said.

He believed VR had made working from anywhere more viable and collaborating with other designers so much easier.

As a designer, Mr Hodge believed VR gave him the ability to be creative without being constrained by the limits of older software.

VR gave him more freedom to design what he could picture in his head.

"You are right there in the space at a one-to-one scale," he said.

Mr Hodge was also working with a game company in Wellington using his VR to design characters for a new video game.

He had never expected his VR design work to get to where it was today, saying "it’s basically a hobby I get paid for so it’s nice".

Mr Hodge had not considered giving up his day job because he liked the freedom to be able to say no to projects.

"If it was full-time, I’d have to take the work that comes to me and I like the flexibility," he said.

He was grateful Escea allowed him to take the time to pursue his design jobs when time was needed.

"They took a chance on someone straight out of polytech and luckily 15 years later it has worked out," he said.

Mr Hodge’s passion for design has passed to the next generation.

His daughter is studying product design at Taieri College.

While he was very proud, Mr Hodge tried not to get involved too much so he could give her the space to learn.

"It’s very cool, I chat to her about what she is working on but also try not to push her at the same time," he said.

In Dunedin, the design sector was very small and Mr Hodge said it was great schools were starting to teach it.

While VR might be taking over, he did not believe pencil and paper would ever become obsolete.