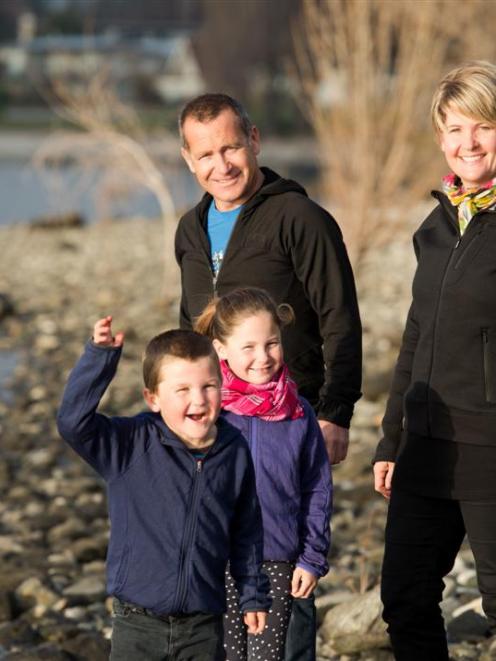 Nicola Simpson is moving from Wanaka to Auckland with her husband, Patrick McAteer, and children William (5) and Sienna (7) to become general manager of people and performance at Icebreaker. Photo by Mickey Ross.
Nicola Simpson is a firm believer in taking opportunities as they come.

She was on holiday with her family at Pounawea when she checked her emails and found a message ''out of the blue'' asking if she would be interested in joining merino clothing company Icebreaker.

It meant moving from Wanaka to Auckland, a city where the family had lived before, but it was a ''huge opportunity'', she said.

Icebreaker chief executive and founder Jeremy Moon said aligning people and performance was ''critical'' to Icebreaker's growth strategy and the company was excited to have Ms Simpson bring her human resources experience to its global team.

For Ms Simpson, her husband Patrick McAteer and their children Sienna and William, the bustle of Auckland will be a far cry from the past three and a-half years in Wanaka.

Born and raised in Dunedin, where she studied marketing and human resources at the University of Otago, Ms Simpson headed to Auckland in search of a career. Her first job was with human resources at Housing New Zealand, followed by positions at New Zealand Insurance, the Auckland Regional Council, AMP, Xtra and Telecom.

She said the shift south was ''just one of those crazy things'' when they discovered Wanaka property developer Allan Dippie had bought BaseCamp with the intention of establishing a Lone Star restaurant and was looking for an equity partner and someone to run it.

Mr McAteer was working in advertising, had been in the wine industry and was brought up at a pub in Fairlie. He was also ''quite a gregarious person'' and had decided to give it a crack, Ms Simpson said.

Wanaka was very familiar to her - she had holidayed in the resort since she was 4 and it was also home to her parents. Mr McAteer did a ''fantastic job'' at Lone Star, and made a real focus to support the locals and community, she said.

When the Icebreaker opportunity came along, they had already decided to sell their share in the business partnership and were ''thinking about what's next''.

While it was a big change to move back to Auckland - ''just the whole lifestyle, it's so easy here'' - they were also comfortable with the city.

''The attraction of being part of a legendary Kiwi company full of talented people who are passionate about what they do was too great to keep me in Wanaka. And it's a big call to leave paradise,'' she said.

Launched in 1994, Icebreaker developed a merino wool layering system for the outdoors.

The range includes clothing for the outdoors, technical sports and lifestyle. It is now sold in more than 3000 stores in 43 countries while the company employs about 350 staff globally.

Ms Simpson described Icebreaker as being a ''success story'', saying Mr Moon had done ''incredible things with it''.

The values around the company's connection to nature appealed to her, while research she did on the company's employees and how they felt about it gave her a sense of ''all that heart and soul'' within it.

There was a great pool of people, with talent and passion, and the company placed a big emphasis on its staff and making them part of the Icebreaker success, she said.

There were also some ''great new people'', like Mr Smith, who had ''incredible retail inside knowledge''.

He will be responsible for strategically developing and implementing Icebreaker's integrated wholesale, retail and e-commerce growth strategy in New Zealand and Australia.

Former Air New Zealand chief executive Rob Fyfe, who was appointed a director of Icebreaker last year and would become executive chairman in September, brought a ''huge wealth of knowledge and experience'', and it would be exciting to work alongside him and Mr Moon, she said.