Australian-owned Plaman bought a diatomite mine at Foulden Hill near Middlemarch in 2015 for more than $A5 million ($NZ5.35 million). PHOTO: SUPPLIED.
The prospect of an open pit diatomite mine in Middlemarch has caused division, and many are concerned about the effects of hundreds of trucks, mine dust, and the loss of Foulden Maar (MAAR), a "pre-eminent" fossil cache.

With no information released since mid-2018, Simon Hartley revisits the proposal, based on a leaked investment document penned by investment bankers Goldman Sachs.

A proposal to mine diatomite near Middlemarch for the next almost 30 years appears to have stalled as feasibility studies and regulatory hurdles take their toll.

However, while there has been no public information release since June last year, there has been no shortage of behind-the-scenes activity: ministers being lobbied, business deals quietly struck as corporates prepare to take on the community.

A confidential report was leaked this week to the ODT, authored by investment bankers Goldman Sachs as a Confidential Information Memorandum.

It appears to have been prepared for would-be investors in Plaman, specifically on the diatomite project, with a 112-page level of detail more akin to an initial public offering to float a company on the sharemarket.

In February 2014, Plaman Resources Ltd was registered with the Companies Office in New Zealand, with a majority 50.95% stake owned by Iris Corporation, a listed Malaysian company with links to supplying the controversial Malaysian palm oil industry.

Plaman general manager New Zealand Craig Pilcher was contacted this week for comment, but declined an interview, after the board took legal advice.

He would only say Plaman directors George Manolas and Panayiotis Plakidis, both of Sydney, were "disappointed" the confidential document had been leaked to the media.

Goldman Sachs' report talks of detaching Iris Corporation as a shareholder to "remove any link" with the controversies surrounding palm oil plantations.

"The removal of Iris Corporation Berhad as a shareholder of Plaman Global as a key part of the corporate reorganisation will be viewed positively by the [New Zealand] ministers, since it removes any link between the Foulden Hills project and the potential use of Black Pearl as a fertiliser for palm oil plantations, which has been identified as a sensitivity for the local community", the Goldman report said.

Black Pearl is the trademarked brand given to the Foulden Hills' diatomite by Plaman.

Other forms of diatomite have long been preferred as fertiliser for the palm oil industry, which clears fells and burns large swathes of humid rainforests to establish plantations; often displacing local inhabitants. 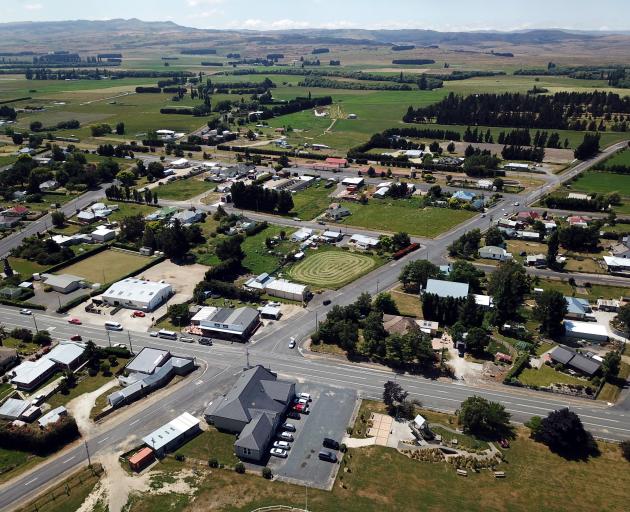 The sleepy township of Middlemarch. PHOTO: CRAIG BAXTER
Goldman Sachs' also noted former Labour Party minister Clayton Cosgrove, whose political career ended in September 2017, has been engaged as a "government relations adviser to secure approval"for the mine as soon as possible.

"Clayton has outstanding relationships with the ruling Labour Government and is doing everything possible to ensure a decision is made by the relevant ministers as soon as possible," Goldman Sachs said.

Goldman Sachs went on to say Plaman has also considered how to defend any potential Environmental Court challenge, which could delay the project.

"Any appeal to the Environment Court is likely to come from a small number of local residents, who are not well resourced and will not have comprehensive technical reports to the same extent at Plaman Global would have", Goldman Sachs said.

Crucial to Plaman Global's plans is its application to the Overseas Investment Office, made in May last year, which is still considering whether Plaman can buy an adjoining farm.

The existing proposal covers 174ha of land, but with OIO approval to buy the neighbouring property, that would increase by a further 432ha.

It would appear the project can only be commercially feasible if full production forecasts can be met; anything less would mean the project would be over-capitalised and likely not viable.

Milton, south of Dunedin, is now earmarked for a $36.8million processing plant on 30ha, following an "offer from Calder Stewart and Port Otago" to locate there, and ship the mineral through Port Chalmers, although Milton development also requires OIO consent.

A Milton plant could be constructed over late 2019-20 and commissioned by early 2020, and production could get under way by January 2022.

Another development is a proposal for Plaman to complete a capital raising and list on the stock exchange in 2020, to "fully fund" the Foulden Hills project.

That loan is until May next year, so Plaman can repay or refinance, and is structured so the first $US50million ($NZ74.7million) raised in a private placement would be retained by Plaman, and any further cash going towards repayments to Goldman Sachs, the report said.

"This gives Goldman Sachs a strong incentive to ensure that the first private placement capital raising is of sufficient size to repay the bridge loan," the report said.

Australian-owned Plaman bought the mine at Foulden Hill near Middlemarch in 2015 for more than $A5 million ($NZ5.35 million), with an estimated 27-year mine life and containing 33 million tonnes of diatomite. The mine would eventually be rehabilitated as a "pit lake"in 2048.

It is claimed the Black Pearl is a globally rare form of "black diatomite" and the mineral would be processed into a 100% organic, high-value stock food additive, reducing antibiotic usage, stimulating animal growth and improving gastrointestinal health.

Plaman told the ODT in June last year it was throwing open public consultation on the proposal, but nothing happened and information dried up - other than letters to the newspaper criticising truck use and the chalk-like dust created by featherweight diatomite.

The report noted under "consenting overview" that there would have to be "ongoing dust suppression" but, given its remote location, the effects of noise and vibration would not create operational issues.

Consents for a variety of operations would be required from the Otago Regional Council, Dunedin City Council and Clutha District City Council.

The report described the Dunedin council as "pro-mining", because it has given multiple consents to neighbouring Oceana Gold, and said council had provided "letters of support" for the project, highlighting job creation, the investment report said.

Another report excerpt said "Management does not expect any significant social or community issues at Foulden Hill."

Plaman was still planning "a series of community consultation events".

Between 2015-17, Plaman had completed 40 either core or diamond drill holes, totalling more than 3km, at Foulden Hill.

Plaman Resource Ltd, trading as Plaman Global, has opted for a production base in Milton, as opposed to near Bluff, and to export through Port Chalmers, instead of Southport at Bluff.

Several transport industry sources were contacted, but none would be identified.

It was understood that instead of hundreds of trucks taking the raw material to Milton, Plaman had undertaken a feasibility study into railing the diatomite to Milton, from Middlemarch through the Taieri Gorge; but with no final decision made.

The report said a roading proposal would result in trucks operating 24 hours a day on the 98km from Foulden Hill to Milton, each carrying 37-tonne loads of diatomite.

Public concerns have been raised about the future of the site's fossil contents, but Plaman last year said there would be no restrictions on geologists' visits, other than usual health and safety requirements.

Fossils were first discovered at Foulden Maar (volcanic crater lake) in 1875, compressed into the thin layers of diatomite, which is several metres thick.

Since 2003, 100 new species of insects have been found, 30 different flowers and hundreds of specimens of two fish species, and there were estimates half of the fossil species were now extinct.

Initial annual mining was expected to start at 100,000 tonnes and move to 500,000 tonnes in four to five years, shipped through Port Chalmers in either containers or on bulk carrier ships.

A total of more than $470 million is estimated to get the project to full quarrying and production levels, of 500,000 tonnes per year, self-funded through cash flow generation once production began, the report said.

"Large scale chimerical production" of Black Pearl was expected in early 2022, with an expected full year earnings before interest, tax, depreciation and amortisation of $US130 million ($NZ194.4 million).

The Sachs report said Plaman had "agreed terms" last November 2018 to lease and acquire land to construct its processing facilities in Milton, which was 152kms closer to Foulden Hills than the Bluff Awarua location, ultimately saving cartage costs by $70per tonne.

The Milton plant would crush, granulate and dry the raw diatomite.

At the end of last year, there were 13 commitments by overseas buyers to trial Black Pearl.

The Sachs report stated "Plaman controls the world's only known commercially viable supply of Black Pearl, and therefore its pricing can be maintained - and potentially increased - over the long term".

Goldman Sachs"s report said there was "rapidly growing demand" for natural feed ingredients in the US and Europe, its target markets initially poultry and pork.

- Plaman has another diatomite permit, near Hindon, which could be suitable for commercial production.