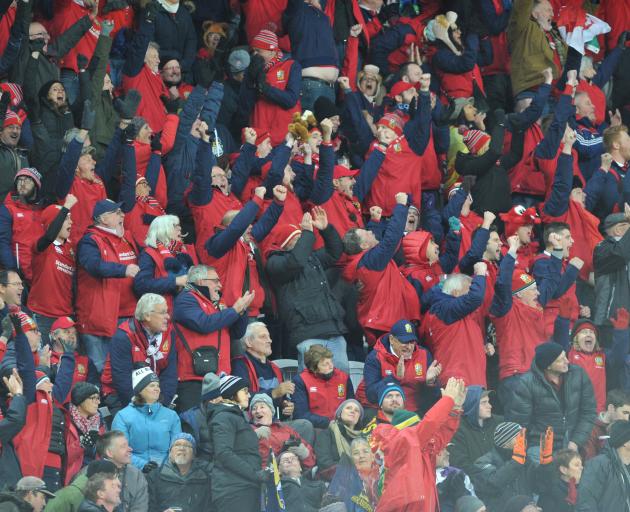 However, the overall spend by the Lions supporters may have been down on expectations, given the weakened pound sterling combined with some inflated hotel prices.

Statistics New Zealand business indicators manager Sue Chapman said the rise in card spending in the hospitality industry in June coincided with the start of the Lions tour, which included spending at hotels, motels, bars and restaurants.

However, when adjusted for seasonal effects, monthly retail card spending was unchanged in June when compared with May, but year on year was up 4.5%.

''Retail spending in the June month was flat because the high hospitality spending was offset by the low fuel prices,'' Ms Chapman said.

Separate data last month showed Otago benefited from an $850,000 increase in hospitality spending during the Lions' visit to Dunedin, pushing it to $2.5 million for the 48-hour period; which did not include the accommodation spend.

ASB's economists said June spending growth was weaker than expected, being flat for the month against expectations of a 0.8% rise.

''The anticipated boost from the Lions tour only boosted hospitality spending, while other categories were weaker than expected,'' ASB said.

In particular, apparel spending fell 0.9% for the month, while in the previous Lions tour period that category saw strong growth, and growth in the consumables category was also weaker than expected. ''This may indicate that Lions fans' budgets were tight, perhaps due to the weak pound and/or inflated hotel prices; as a result, they may have prioritised accommodation, eating out, and beer, over other purchases,'' ASB said.

The fuel price decline during the month also dragged down the overall spend, ASB said.

Westpac senior economist Satish Ranchhod said underlying spending trends had softened since the start of the year, and for June overall spending was flat, dampened by a fall in fuel prices.

''We continue to expect moderate, rather than spectacular spending growth over the coming months,'' Mr Ranchhod said

While interest rates were still low, they had been pushing upwards and, in addition, the slowdown in the housing market would dampen spending in a number of areas, he said.

On quarterly spending, SNZ's Ms Chapman said actual retail spending using electronic cards was $14.9 billion in the quarter to June, up $675 million, or 4.7%, from the previous quarter to June.