Tools up for property maintenance man 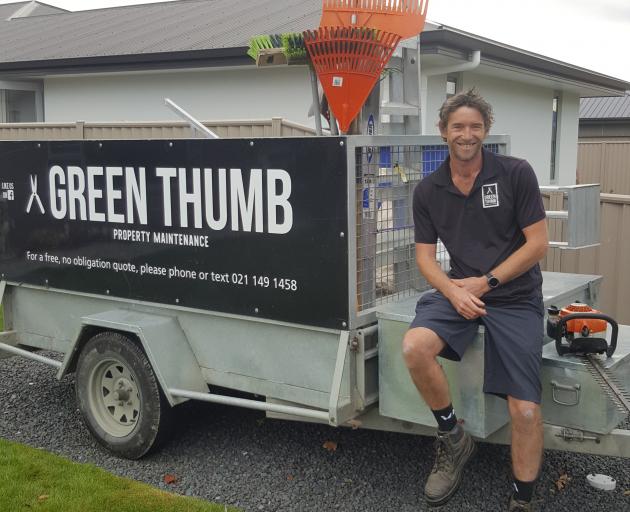 Green Thumb Property Maintenance owner Michael Lucas has made small changes to stick to the Alert Level 3 rules. PHOTO: SUPPLIED
Property maintenance operator Michael Lucas is looking forward to getting back to business.

Mr Lucas, who owns Green Thumb Property Maintenance in Dunedin, has had to put his tools down for the past month due to the Covid-19 Alert Level 4 lockdown.

He kept busy by doing some maintenance on his equipment and jobs around the house.

“We’ve pretty much done everything now so definitely ready to get back into it on Tuesday,” he told The Star last week.

He had had to make only small changes to the way the business operated to abide by the Level 3 rules, he said.

He usually worked by himself — besides employing a part›time worker, who could not return until Level 2 — and did not have much face-to-face contact with his customers.

For those customers who preferred to pay in cash he had asked that they leave the money out.

He would take extra care to sanitise between each job.

Many customers were elderly, so even before the lockdown they tended to yell instructions out of their windows, preserving a safe distance.

Before Level 4, he was booked up for a month, and now had work until the start of June, he said.

Business was starting to trickle back in, but winter was always a worry as it was a quieter time.

Usually, he reverted back to his previous trade as a chef at his friend’s restaurant.

“At this stage, there’s plenty of work for the first six weeks and then it’s one of those businesses where you just play it by ear, really.”

Getting the Government’s wage subsidy helped to ease the anxiety he had felt when the lockdown was announced.

“There was a sigh of relief when that popped in there [his bank account].”

ODT, you are doing a great local public service, running news stories about local businesses like this, especially sole traders, who really have to think twice about whether they will have the work before they employ even part time workers. It’s also a help to potential customers to know when such businesses have quiet times without much work. For example, a person with greenhouses or polytunnels might be able to give a gardener winter work because location is under cover. But trying to employ them during spring when there is heaps of unspecialised work around would be a waste of time. Also, now would be a good time to give local home and garden kaitiaki businesses some publicity because tradies are backed right up with work booked before lockdown and for the next four weeks at least there will be more than enough building, alterations and home and garden maintenance work to go around, especially with respect to the smaller, less skilled jobs.

Absolutely ridiculous that this man was forced to stop working by our dictator-in-chief.

He - and so many like him - wasn't even given the chance to suggest a safe business plan back when we thought this virus was going to be more serious than it turned out to be. He was simply ordered to close everything, no debate, no disagreement.

I notice Butcher's and greengrocers still aren't allowed to open. Nor are liquor shops like the one opposite McDonald's. And presumably Pak N Save is somehow WAY safer than Mitre 10.

Not sure how exactly. It just is. Because the PM says so.

I don't know what Ardern thinks is so much less safe about all these businesses than supermarkets, but She Has Spoken.

And we must Obey.