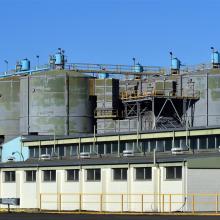 However,  smelter owners Rio Tinto and Sumitomo had to form their own views based on the reality of the world aluminium market and their view of the future.

"There will always be uncertainty, which is why we would prefer the smelter to stay — but not at any cost," he told yesterday’s annual meeting in Christchurch.

"The only thing we can manage is the [smelter] energy price, which even with the January 1 increase will remain the cheapest electricity price to any New Zealand customer."

If the smelter did close, the excess power available in the lower South Island would flow north and there would be both supply and demand side adjustments as the market adjusted to a "new normal", Mr Binns said.

While short-term price movements were difficult to predict,  it was probable Meridian, over the medium term of about five years, could be in an even stronger strategic position than it was today. But modelled outcomes  always depended  on assumptions made and there always would be uncertainty, he said.

Mr Binns  recently returned from meeting investors in the United Kingdom and the United States and the smelter was always the first issue for discussion. That was not surprising, given the smelter used 12% of New Zealand’s electricity and its future had implications for the whole sector.

From January 1, a price increase was effective and from that date New Zealand Aluminium Smelters had a perpetual right to terminate its contract on giving 12 months’ notice, he said.

"Investors’ views on this vary. Some are concerned — they tend to be those who have not invested in the sector but probably would if the smelter left and the uncertainty was removed."

Others felt  the economics of the smelter, although still difficult, did not justify a closure,  Mr Binns said.

Last year, Meridian was unable to convince any of its rival electricity suppliers to take up the slack on the Tiwai Point contract and it remained the sole electricity supplier. In the coming year, Meridian would complete the roll-out of smart meters to 90% of its customers by March, making for more accurate billing and helping more customers access their own data and innovative tariffs, he said.