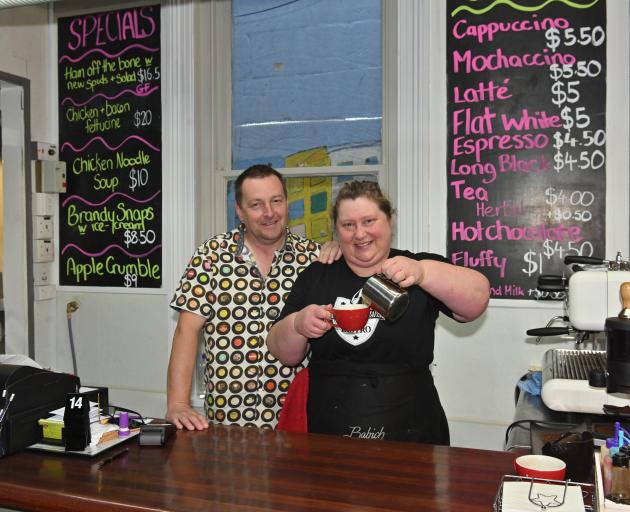 Richard and Susanne Dagg have opened Heff’s Restaurant in South Dunedin and expect to close the Normanby Tavern in a couple of months. PHOTO: LINDA ROBERTSON
As one longtime Dunedin pub teeters on the brink of closure, a restaurant opens and the fate of both weighs heavily on the minds of Susanne and Richard Dagg.

The publicans of the Normanby Tavern have opened Heffernan’s Restaurant alongside Heff’s Hotel in King Edward St, South Dunedin.

As a result, the couple have closed the bistro that was attached to the Normanby Tavern and relocated their resources to the new restaurant, which opened on Thursday.

Richard Dagg is staying on as the publican at the Normanby Tavern, but he said it might not be long before he shuts the doors for good and joins his wife at their new restaurant.

"At the moment the Normanby is in a holding pattern," he said.

"We’ll give it a couple of months to see if it can stand on its own two feet.

"If it can I’ll stay there. If it can’t you could be interviewing me about the demise of another local pub."

"We only use fresh goods as much as we possibly can. We make whatever we can in-house.

"We make it all ourselves."

One of the items on the menu harks back to an old Heff’s Hotel publican and a familiar South Dunedin figure.

"Everybody would come in [Heff’s Hotel] and Keith Mangos was the publican and he used to sit at the end of the bar with a microphone and poke fun at everybody as they walked in," Mr Dagg said, recalling a visit to the bar when he was 21 years old.

"[He was] mostly good natured. He was a real character.

"We’ve invented a Keith Mangos burger as a tribute to him.

"A pork pattie, mango and peach chutney because it goes with the name, swiss cheese because all of his tall tales had a few holes in them and then a bit of tomato and a homemade coleslaw. It’s just beautiful."

Heff’s first opened in 1880 and in 1882 the first of the Heffernan brothers took over.

They ran it for 78 years between them and "that’s why the place is known to everybody as Heff’s," Mr Dagg explained.

Mr and Mrs Dagg found out through a customer that Heff’s Hotel publican, Sean McCarrigan, wanted a way to offer more food to customers so they came up with a deal to lease part of his pub.

They then turned that into Heffernan’s Restaurant, which people could access from a separate street access or through Heff’s Hotel.

"We know we’re going to be a lot busier because there are far more people out here," Mr Dagg said.

He and Mrs Dagg took over the Normanby Bistro five years ago, and added the tavern to their charge about three years ago.

"We cleaned it up, gave it a new lease of life, but it just hasn’t been busy enough.

"We’ve made a really tough call to move out of the valley because we’ve had a lot of support out there and we love the fact we’re thought of as a part of the local community.

"We were either going to fade away into oblivion or we were going to reinvent ourselves."

While the idea of having to close a pub in Normanby weighed heavily on him, Mr Dagg was pleased to see familiar faces turning up on the opening day of Heffernan’s Restaurant.

"We’re fortunate we’ve got a loyal following at the Normanby.

"We’ve already seen quite a few of them in here and so that gives us a really good base along with anyone else we pick up from South Dunedin or further afield."

Mr and Mrs Dagg planned to wait until the end of February before making a decision about the Normanby Tavern’s future.

Named after The Normans was Normanby. The tavern had an effigy of one in, er, battle dress.