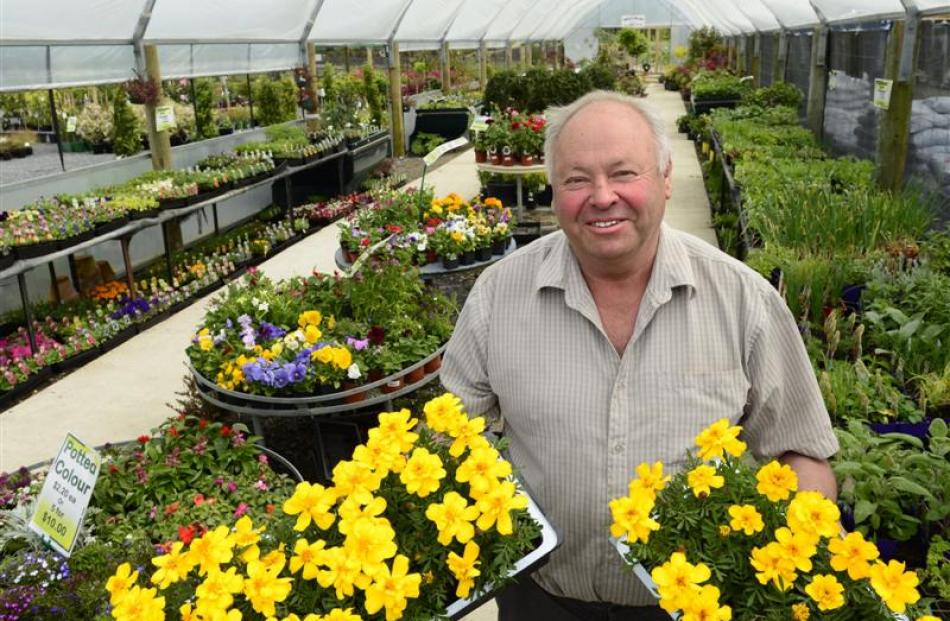 When Clive Wallis says he has "had some dreams", he's not kidding.

Appropriately, the Otago nurseryman likened his business ventures to having branches on a tree and the tree was "growing flat out".

Mr Wallis is the man behind Wal's Plant Land at Mosgiel, which is now morphing into what he describes as a destination, with attractions for all members of the family.

Not content with just a retail plant centre, Mr Wallis has added a cafe, which is leased to Richard and Michelle Denhardt, previously from No 8 at Outram, and will be officially opened tomorrow by National list MP Michael Woodhouse at 10.30am.

As part of Wal's Fun Land, there is the miniature railway, run by members of the Otago Miniature Road and Rail Society and with plans to double the length of the track, an 18-hole mini golf course, and ponds for remote-controlled boats to be sailed. A Veggie Boys retail outlet is on the property.

A 300m golf driving range will be operating by Christmas. A seven-hole chip-and-putt course, a living maze and an animal park are planned, while a function centre was also a possibility. It would eventually be known as Wal's Leisure Land.

And if that was not enough, there was still the flagship long-standing Wallis's Nurseries wholesale business on the Taieri, developed by Mr Wallis' father Ces more than 55 years ago. The trade nursery supplies garden retailers, landscapers and councils, and has one of the largest ranges of nursery stock in New Zealand.

Retirement was not an option for the 60-something year-old; nor was the cessation of his dreams.

"Every day I look forward to getting out of bed and the challenges out there and opportunities still there. If you're not going forwards, somebody else is passing you."

He paid tribute to jeweller Sir Michael Hill, whom he described as his mentor, and from whom he had learned to surround himself with good people "because you can't do it yourself".

Mr Wallis was president of the Nurserymans Association when a conference in Queenstown was opened by Sir Michael.

After a spectacular introduction, involving a chainsaw, Sir Michael had the 400-strong audience in the palm of his hand as he spoke for two hours about his dreams and passion.

However, Mr Wallis was candid when he said that if he had not done what he had, the nursery would have been closed.

"There's no two ways about it," he said.

He would have been "another fatality" of wholesale nurseries not keeping pace with change.

Over the past three or four years, he estimated about 30 wholesale nurseries had collapsed or gone.

"You've got to be thinking outside the square," he said.

He and his brother John both joined the family business after leaving school. Clive split his apprenticeship between there and Duncan and Davies, the long-established Taranaki nursery, where he learned about container growing. He became involved in sales and marketing and his brother with propagation and production.

Clive Wallis and his wife Linda, a school teacher, took over the wholesale businessjust over 20 years ago.

Later came the start of the downturn for the industry and gardening slipped well down the rungs from being the "number one" leisure activity.

That was when he saw an opportunity for a nursery in Shanghai, which he had for 11 years "flitting back and forth", to use the staff and facilities he had in New Zealand. He learnt a new culture and some new language. A highlight was supplying plants for the New Zealand pavilion at Expo 2010 Shanghai, China.

The couple have also become involved in a nursery in Auckland, which they were "turning around".

Their retail operation was started due to the "slippage" of the Dunedin market. It started with a second-hand garage, a plastic tunnel-house, and three staff, four years ago, Mr Wallis said. It was going "really well" and the area had since been extended.

About 30 staff were employed across the whole operation.

Last Sunday, more than 300 rides were given on the miniature railway, the cafe - which seats up to 40 on the veranda and 60 inside - was full, and Mr Wallis was "stuck on the loader loading bins all day", he said, laughing.

He was still passionate about plants and described New Zealand as like a "huge glasshouse": "There's not much we can't grow; it's just a fabulous place to grow plants", and there were still opportunities to do a lot more with plants.

Mr Wallis said he learned more from his father than he ever did at school and he promised him he would create something that he would be proud of. He expected that he would now say he had "made it", he said, with just a little touch of emotion.