Planners in favour of work 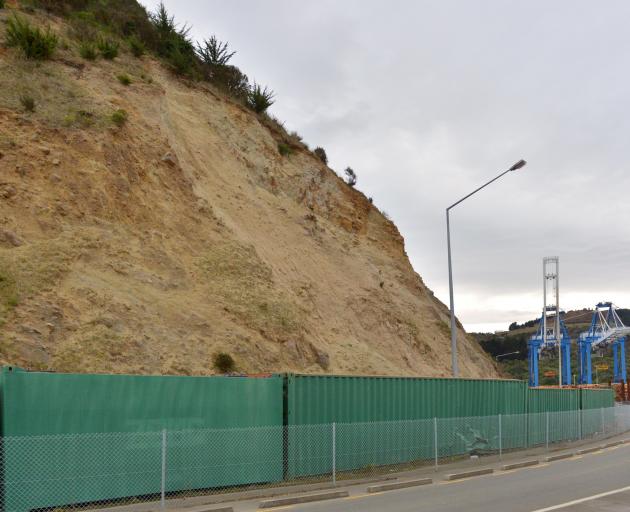 In late 1999, a slip on Flagstaff Hill prompted Port Otago to undertake remedial earthwork,  benching the bottom of the hill on Beach St, but further recent instability is  encroaching on the road and port railway tracks and further benching extensions are required.

The work is not expected to change the hill’s profile nor will anything be done to its mid or upper sections.

An unspecified amount of topsoil would be brought in  for landscaping purposes.

Port Chief executive Geoff Plunket was contacted and said the project would be done during daylight and business hours at a cost of "more than" $500,000.

"Our aim is to do this as quickly as possible. We want to restore genuine two-way traffic, with no train interruptions" he said.

Two submissions to the Dunedin City Council supported the proposal.

One was opposed and one did not indicate either way.

Two submitters, who want to be heard at the hearing, raised concerns over destabilisation in the area, monitoring of new plantings, visual impacts, heavy traffic movements, dust emissions and interruptions to lifestyle.

The planners said Port Otago must ensure the works were covered by noise management and mitigation plans and take the "best practical" options to mitigate adverse effects of  noise.

Visually, the overall work would have "significant initial adverse effects" on the hill’s natural character, but once mitigation work was carried  out those effects would become minor, after 15 years.

"Once the proposed landscaping is properly established, it is considered that amenity values will at least be maintained, if not enhanced," the planners’ report said.

In Port Otago’s resource consent application, to be heard on August 31 by councillors Andrew Noone, Lee Vandervis and Andrew Whiley, a council planner and also a senior planner said the proposal was consistent with provisions of both the "operative district plan" and "proposed 2GP".

The planners noted the proposed works were considered necessary to improve overall hill stability, which would reduce the risk posed to both the public and port activities.

The project had been costed by Port Otago at between $500,000 and $1 million, when it outlined several new projects to 100% owner the Otago Regional Council in July last year.

The extended benches would have maximum widths of 4m-5m and have intervening batter slopes no more than 6m in height.

The conditions include a traffic management plan, road closures kept to a minimum, removal of spoil via Beach St to George St/State Highway 88, and  ensuring dust did not become a nuisance.

There was potential for blasting to be used at the site, with the planners noting any nearby residences must be given seven days notice of any blasting.

Mr Plunket said blasting had not been required during the last benching project, so applying for permission to blast this time was "just a precaution".

● The original benching earthworks were put in place after the late artist Ralph Hotere’s studio was demolished by the port company in 1993, because of instability on the high bluff.

At the top of the hill is a Hotere sculpture garden adjacent to the Flagstaff lookout; the lookout having a category 2 listing with Heritage New Zealand Pouhere Taonga.