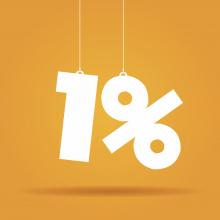 Some economists are picking the Reserve Bank's interest-driving official cash rate will end the year at 1%, against the already record-low 1.5%. GRAPHIC: GETTY IMAGES
Softening economies are putting increasing pressure on central banks globally to cut interest rates and economists are picking an increasing likelihood of Reserve Bank of New Zealand cuts, potentially to 1% by year-end.

The interest-driving official cash rate (OCR) in New Zealand is at a record 1.5% low.

The outlook is good news for new mortgage borrowers as bank competition heats up to attract new borrowers and maintain market share, while those refixing mortgages will have increased leverage to secure a better deal.

"We've changed our OCR call and now expect the Reserve Bank to cut the OCR by 50 basis points, to 1%, by the end of the year," Mr Tuffley said in a statement.

He noted, as expected, the Reserve Bank of Australia cut its rate to 1% last week and he expected that to fall further to 0.75% later in the year.

The focus on global markets was whether the US Federal reserve would signal a cut to its rate, from the 2.25%-2.5% range, he said.

The New Zealand dollar was weaker as investors continued to pare back expectations of a hefty US interest-rate cut at the end of the month.

Sharemarkets pulled back expectations for a 50-basis-point rate cut this month by the Federal Reserve, after strong jobs data last week, but still anticipate a 25-basis-point reduction to come later.

The Federal Reserve, which hiked rates four times last year, has kept its current benchmark overnight interest rate in a range of between 2.25% and 2.50% since December, Reuters reported.

Federal Reserve chairman Jerome Powell set the stage for the first US interest rate cut in a decade later this month, pledging this week to defend an economic expansion threatened by trade disputes and a global slowdown.

Mr Tuffley expected OCR cuts of 25 basis points in August and November, but that was dependent on domestic economic data, any global events, the New Zealand dollar and other central bank actions.

Kiwibank's senior portfolio manager, Ross Weston, said that without meaningful fiscal impulse, central banks were "in a race to the bottom".

"And our Reserve Bank is looking like the tortoise - slow and steady," he said in a statement.

"The need to cut the OCR to 1% and below is becoming increasingly likely," he said.

He noted last week's cut in Australia was the second consecutive rate cut.

"The Reserve Bank of Australia is worried about the slowing Australian economy," he said.

He expected the Reserve Bank of Australia would be forced to do more, cutting to 0.75% later in the year, even though the Government was loosening the purse strings.

Adding to reasons for New Zealand's Reserve Bank's need to cut rates next month, Mr Weston also highlighted that business confidence fell in the second quarter to the lowest reading in a decade.

"And even more worrying was a fall in firms' outlook for their own domestic trading activity - a reasonable indicator of GDP growth," he said.

Manufacturers stood out as the most downbeat, and global trade tensions were weighing on exporters.

There was also a lack of confidence among firms building, as rising costs eroded profitability.

"And it now seems that falling demand can be added to this dangerous mix," Mr Weston said.

Low rates have not helped Japan & Europe over the last 10-30 years, why will it help us as a whole in NZ? You are destroying savers, investors and pensioners' future to support over debt burden persons and companies. In the end the nation still needs to pay back its debt- the NZD is not a reserve currency so we can not print our way to prosperity- Mr Orr does not seem to understand that and just parrots other central bankers.