Yesterday, the company delivered its full year result  for the year ending June 30 to its sole shareholder, the Otago Regional Council, which received a $10.1 million dividend. 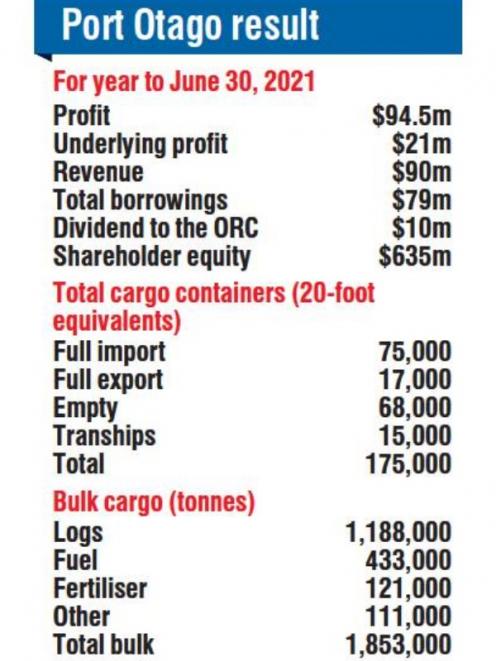 Underlying profit — which is the profit from its four business units, with the revaluation movements and tax removed  — was $21 million for the 2020-21 year, down 13% from $25 million on the previous year.

Revenue was $90 million, down $20 million compared to the year before, due to the loss of cruise ships, a 9% drop in containers through the port caused by the global shipping disruptions and fewer land sales at its Te Rapa Gateway development in Hamilton.

To reflect the unrelenting year with shipping disruptions, container yard congestion and the ever-present Covid-19 protocols of testing and vaccination, Port Otago’s board approved a one-off payment of $750 to its frontline staff who dealt directly with international ships.

The revenue loss from cruise ships and an uncertain outlook mid-2020 prompted the port to reduce its cost base.

Nine staff were made redundant and there was a ‘‘big push’’ to use annual leave that was sitting in reserve.

That, along with some early retirements, delivered ‘‘significant savings,’’ Mr Rea said.

Chief executive Kevin Winders said it was clear the company’s portfolio ‘‘buffered’’ some of the lost income.

Its property portfolio was valued at $501 million, up from $406 million the year before.

The company was well positioned to get ‘‘pretty reliable’’ earnings out of the property division, which would help  provide the ORC with a dividend in the future, Mr Winders said.

The cruise ship business would not be back this financial year due to  ongoing Covid-19 restrictions but it was optimistic there would be some return by October 2022, Mr Winders said.

There had been some sign at overseas ports that the disruption, caused by the global shipping delay, was starting to improve but it would be at least 12 to 18 months until it would settle, Mr Winders said.

As more new ships came off the shipyards and entered service, it would start to help.

‘‘At the moment there is not enough supply [of ships] and a lot of demand so it adds congestion, but as more supply goes in, it will start to even out,’’ Mr Winders said.