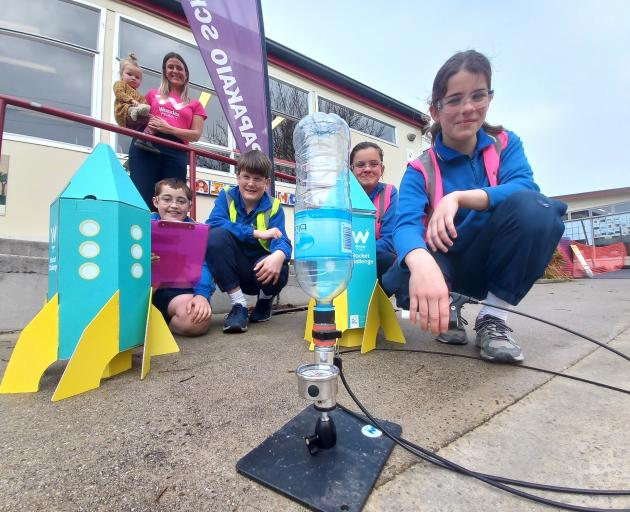 Taking part in the Wonder Project at Papakaio School are (in blue, from left) pupils Owen Elliott (13), Thomas Isbister (12), Florence Finlay (12) and Tessa Wright (13), and ambassador Kate Faulks and her daughter Sage (2). PHOTO: SALLY RAE
Know how to launch a rocket? How about lighting up a small city?

Some of the world’s future problem-solvers are being developed at Papakaio School in rural North Otago.

The school is signed up to the Wonder Project, a free programme designed to get young Kiwis excited about science, technology, engineering and maths (Stem).

The Engineering New Zealand initiative aims to help address a skills shortfall in the sector by providing hands-on programmes for schools, designed to spark wonder and awe in children and open their eyes to the possibilities of a future Stem career.

Papakaio started the programme in term four last year with a plant-growing challenge — considering how to solve the problem of feeding the world with a growing population and less space — and pupils looked at vertical gardens and microgreens.

This year, a water rocket challenge had pupils learn about propulsion and aerodynamics — "all quite high-level stuff" — but it was broken down into "layman’s terms" for both teachers and pupils, principal Damian Brown said.

Schools were matched with Wonder Project ambassadors — professionals working in the Stem sector who wanted to make a difference.

At Papakaio, that person is Kate Faulks, a parent at the school and farmer at nearby Altavady, who worked in the energy sector for six years in operations management and project engineering before returning to North Otago in 2018.

Mrs Faulks completed a degree in chemical and process engineering, with honours, at the University of Canterbury and later joined ExxonMobil. She also has master of business administration from the University of Otago.

Being involved with the Wonder Project was "pretty awesome", she said.

Many schools tended to focus on literacy and numeracy, which were "incredibly important" subjects, but there was not much opportunity for pupils to do Stem subjects until they got to intermediate and secondary school.

By that stage, the window to influence children to get into those areas could start to narrow, she said.

Her experience at both engineering school and in the energy sector was that women were in the minority; at university, her class was about 30% women and at ExxonMobil, there was about 10%-15% female representation.

She believed social and environmental factors contributed to why some girls did not pursue Stem.

Particularly as the mother of daughters, Mrs Faulks said it would be great to get girls to cultivate their own interest in the subjects early on.

Women brought different ideas to Stem industries — there were many examples of having a female perspective improving design — and it was about bringing diversity to the table.

Mrs Faulks said that growing up, she knew she could do anything she wanted to, but some girls were "just conditioned to think" they might not be capable.

In her role as an ambassador, she was there to help with sessions by supporting the pupils and teachers, keep them excited and help them with the creative process.

She also talked about her own experiences in Stem.

She was keen to see other schools get involved with the project. She was aware of some in North Otago which had signed up for next term’s power challenge but were waiting for ambassadors.

It was a "really cool opportunity" for people from a Stem background, or for businesses to send a representative along,to contribute to their community and help inspire children, and she urged people to sign up.

While power was not an area of expertise for her, she was looking forward to learning and she believed the project, which involved using wind and solar and wind energy to light up a mini-city, would really appeal to children.

A huge part of New Zealand — and the world’s — future was how to power it renewably.

With all the information and resources provided, Mr Brown said the Wonder Project was "low input, maximum output".

"And it’s so much fun," Mrs Faulks added.