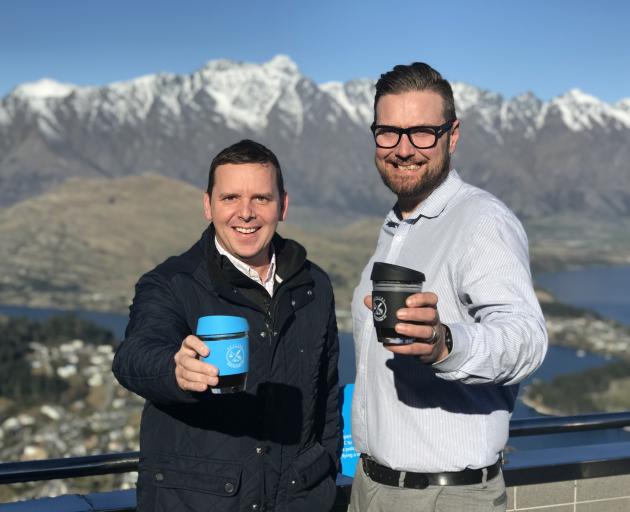 That is the message from the Queenstown hospitality sector which has mobilised to cut back its environmental impacts.

The city's most popular attraction, Skyline Queenstown, has now culled the use of single-use cups, which it estimates will help divert about 160,000 takeaway cups from landfill annually.

The adventure and dining destination, which hosts almost a million visitors a year, is now offering guests the option of bringing their own cups or buying a reusable glass cup for $8.

Skyline Queenstown operations manager Pierre Poyet said it had been ''relatively painless'' to bid adieu to takeaway cups, with both customers and staff ''very receptive'' to the change.

He said the cafe and restaurant had already sold out its first run of the cups and the company was now considering a ''boomerang'' cup programme where customers pay a deposit on a borrowed cup.

''We continue to explore ways in which we can reduce our impacts - an estimated 295million cups are estimated to go to landfill in New Zealand every year so we need to make a start on reducing that.''

Mr Poyet said the company was also looking at its smoothie, sushi and salad containers.

''We need better options for takeaway meals, in a way that balances our guests' needs but also looks after our planet.''

The company was also the first to install a ''biodigester'', as a way of diverting food waste from landfill and reducing attendant greenhouse gas emissions.

The large biologically-based food mulcher, supplied by US company Biohitech, was airlifted on to Bob's Peak in 2017.

Mr Poyet said the biodigester, which used mico-organisms to help break down food and feed it back into city's water biosystem, had diverted more than 9 tonnes of food scraps from landfill over its first year.

Following its lead, the 273-room Novotel Queenstown, the city's biggest hotel, this week installed its own version of the biodigester, the Orca

Novotel Queenstown sales and marketing manager Jennifer Hughes said while the system had just been installed ''and we were working through how to use it'' it reflected the group's broader commitment to reducing food waste and its CO2 footprint.

She said the investment was aligned with Accor Hotels' Planet21 global programme, which includes initiatives such as recyling and reusing guest room soaps and bathroom products.

''It's the kind of thinking we need to ensure the sustainability of our region's offering to the world.''

She said the challenge of food waste was a big one.

''If food waste alone were a country, it would be the third largest greenhouse gas emitter.''

It is the thinking behind Sustainable Queenstown's venture with the KiwiHarvest food reclamation project and its Dishrupt campaign, which aims to disrupt the community's dependency on disposables.

-This story is part of the Otago Daily Times' contribution to Covering Climate Now , an international campaign by more than 170 media organisations to draw attention to the issue of climate change ahead of a United Nations summit on September 23. To read more of our coverage go to odt.co.nz/climate