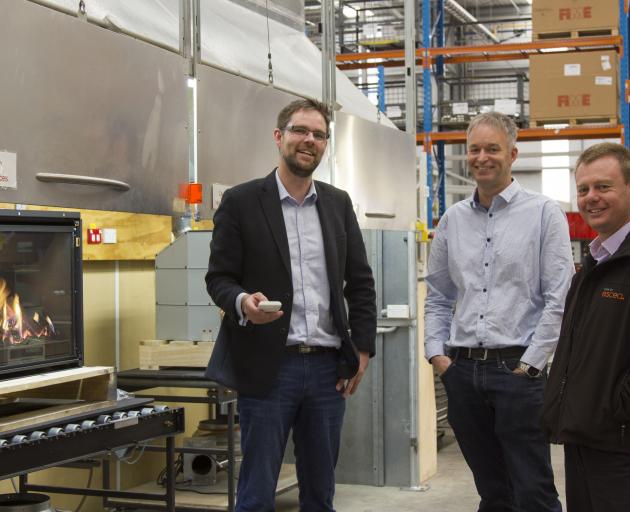 Escea founders (from left) Nigel Bamford, Garth Milmine and Alan McGregor. PHOTO: SUPPLIED
It was a good year for the country's tech exporters, who earned $12billion in total revenues for the first time - more than 10% of New Zealand's total export receipts.

The top 200 tech exporters, known as the TIN200, added $1billion in revenues this past year, increasing export receipts by $882million.

The latest report by Technology Investment Network (TIN) showed that the regional growth superstars were Wellington, which pushed revenues by 17.5% to $2.6 billion, Otago-Southland, which added 16.2% to a total of $469 million, and North Auckland, which posted a 15.2% increase to $1.3 billion.

As the smallest of the tech regions, Otago-Southland also boasted the highest five-year compound annual growth, at more than 20%.

Its nine TIN200 companies added 121 jobs to their payrolls over the past year.

Otago's growth was led by its high-tech manufacturing sector as robotics manufacturer Scott Technology, life science research and education company ADInstruments and fireplace manufacturer Escea accounted for more than half of the region's TIN200 revenue returns.

Dunedin-based online education company Education Perfect merited a mention, featuring in third place in TIN's "scale-ups'' for 2019, on the back of a reported $6.6 million improvement to revenues of $20.8 million.

TIN managing director Greg Shanahan said the numbers sent a strong message that the sector had the potential to become the country's "leading source of offshore income''.

"We're very excited to see the potential that this long-term sustainable growth presents.''

He said another important indicator was growth of the TIN Rising Star category - companies that qualify on the basis of a minimum of 20% growth over three years - to 29 companies.

These were dominated by the information and communication technology (ICT) primary sector, he said.

"It's also encouraging to see the pool of strategic leaders with the technology industry grow as more NZ tech companies mature.''

He said of particular note was the 18.5% annual growth of tech exports to Europe, which now total more than $228 million.

Globally, North America delivered growth of just under 10%, with overall sales at $2.7 billion.

According to the TIN report, larger companies such as Fisher & Paykel Healthcare and Pushpay continued to report good growth in that market, while biotech grew by 15.5%.

The Australian market, meanwhile, delivered the largest dollar revenue increase of any country, at $276 million, and was also the New Zealand tech sector's largest export market at 36% of exports.

The Asian market, for its part, provided revenue growth of 11%, despite the slowing Chinese markets in the wake of trade tensions with the United States.

The report says high-tech manufacturers are the biggest players in this market, accounting for more than 80% of total Asian sales.

More than half of the 52,000 employees work in New Zealand.

Amazing work being done by the often unsung private sector.
It puts the one-off handout of $60 million by the government in its true light.
Enterprising kiwis are the wealth generators of this nation.
Government is best suited by getting out of their way and offering encouragement.