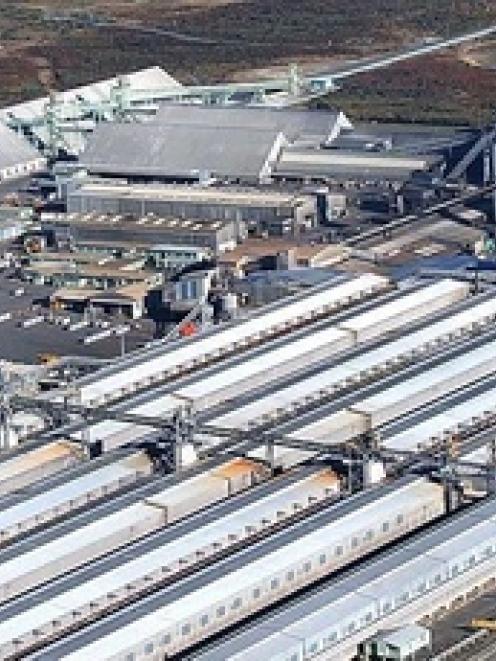 The Tiwai smelter.
Rio Tinto has been told the $30 million Government subsidy to ensure the Tiwai Point aluminium smelter remains open until at least 2017 is a one-off, and was significantly lower than the company initially asked for, Finance Minister Bill English says.

Asked whether Rio Tinto had the Government over a barrel, Mr English said it did have significant negotiating power.

"Anyone who can take a business away has a community over a barrel and has its workforce over a barrel. So they brought some negotiating pressure to bear. I think they had in the back of their mind that when they got what they could from Meridian, they would probably come to the Government."

He said Meridian had originally sought "hundreds of millions of dollars" of assistance from the Government for its contract with Meridian. "We said no to that. It's a payment we concluded was required to get the deal completed."

He said it was possible Rio Tinto would return in 2017 to ask for more. "They may try that. They certainly wouldn't get another bite of the cherry from this Government."

Mr English said although the subsidy and re-negotiated deal would help with the float of Meridian, for which NZ Aluminium Smelters is a key customer, the Government had also stepped in to help protect about 800 jobs in Southland and resolve the uncertainty that the ongoing negotiations with Rio Tinto were creating in the electricity market.

"We could say we weren't interested at all, but this is a Government which is pretty pragmatic." He said the Government had also offered assistance to other sectors, such as the kiwifruit sector after the PSA virus.

"So in this case, it was about getting the deal completed and getting certainty for workers at the smelter, the wider electricity market. It does support the float of Meridian, and will give investors more certainty about what they are buying into."

The Government hopes to float Meridian by the end of the year as the second off the rank after Mighty River Power. He said it guaranteed the smelter would continue to operate until at least 2013, and the subsidy and renegotiated prices with Meridian meant the ongoing viability of the smelter was now much more likely.