Unions to ban port overtime unless accord possible 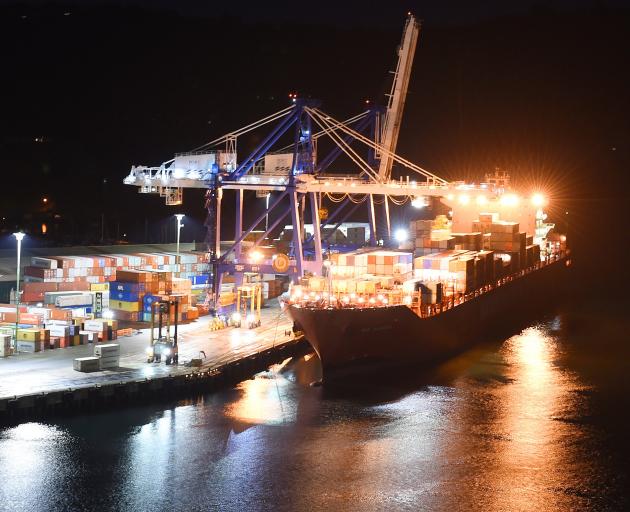 Port Otago workers have given notice of an overtime ban over disagreement with management over pay and safety concerns. PHOTO: GREGOR RICHARDSON
More than 250 frontline workers at Port Otago will refuse to work overtime unless port management addresses safety and wage concerns.

A strike notice outlining the overtime ban was jointly issued by the Rail and Maritime Transport Union and the larger Maritime Union of New Zealand yesterday following discussions with management that "did not result in meaningful progress", according to a statement.

The two unions, which represent around 250 of the 325 port staff, have now issued a 14-day notice of an overtime ban starting on September 7, unless agreement - likely through mediation - can be reached in advance.

Port Otago is the country's fifth-largest port by volume, last year paying a dividend of $9million to owner the Otago Regional Council.

Its latest half-year results show profits of $8.3million, from total revenue of $44.3million.

At issue are wage and worker safety concerns, although one industry insider said the unions and management "weren't that far apart".

"It isn't the first time the union has used the overtime ban tactic - it is likely to be short-lived. Even so, it's low season, so the port could manage through it," the insider said.

Combined unions spokesman John Kerr said there were essentially two sticking points - a claim for a 4% pay rise across the board backdated to July and the issue of fatigue management. In response the port has offered a 2% wage increase.

Specifically, the unions wanted to engage with management in a manner recommended by Massey University research professor Philippa Gander in a 2017 report on roster management at the port.

However, the unions' take was surprising, considering the major focus the port had put on what it referred to as its "visible safety" initiatives, the insider said.

"As part of that the company has initiated a new health and safety runanga forum, which includes safety representatives, line management, leadership team members and directors."

Last year the port also upgraded its Dunedin depot to install hard stand and permanent barriers to separate workers from machinery at a cost of $2.4million and formed a rostering team to source a software solution as a staff app.

"People safety is a key focus for Port Otago and we will continue to work towards an outcome that is satisfactory for all parties."

However, Mr Kerr said the port's management team seemed to be taking some time to come to terms with the negotiation.

"We've been asking to engage on the collective agreement since the beginning of the year.

"When they did come to the table they started with 170 claims, which in my experience is unprecedented," he said.

"Since then they haven't offered anything new."

He said Port Otago chief executive Kevin Winders, who was visiting customers in Europe, had not been involved in negotiations to date.

"That in itself isn't unusual, but we want to deal with someone who can make a fast decision because we want to resolve this."

He said the unions were optimistic of reaching a mutually agreeable outcome to bargaining.

"But our members are rock solid on the need to deal with the workplace hazard of fatigue.

"We regret any inconvenience to port users or customers but we can no longer tolerate this real and meaningful health and safety risk to workers."