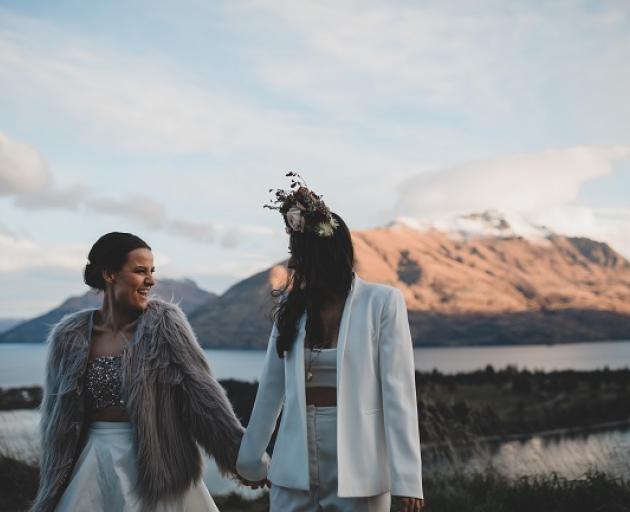 Charlotte Meldrum-Hanna and Whitney Higginson PICTURE: WILLIAMS PHOTOGRAPHY
The thrill of tying the knot while tying in a holiday with one’s nearest and dearest is making Queenstown more and more popular as a wedding destination.

Data collected from the 20 celebrants registered with the Queenstown Wedding Association shows there are easily 1000 weddings held in the resort every year.

Association president Philippa Thomas, who’s been a celebrant here for five years, says that figure continues to climb and doesn’t factor in couples who’ve flown in celebrants from other areas.

“On any given day, its a fair estimate that there will be at least one wedding,” Thomas says.

“A big change is there’s no longer a very clear shoulder season, and now its consistent throughout the year.”

The Chinese and Australian markets make up a huge proportion, however, she says the largest increase has been in Kiwis, from other parts of the country, choosing Queenstown as a place to say “I do”.

Thomas puts this down to cheap domestic flights: “Previously it was cheaper to fly to the islands than it was to Queenstown.”

In 2015, it was reported the wedding industry was estimated to be worth $58 million a year to the region.

While Thomas doesn’t have a dollar value on the industry’s worth to the economy now, she says it’s more far reaching than people expect.

There are wide-reaching benefits for the town from the industry’s growth, with hundreds of guests attending in some cases.

Very few bride and grooms fly in and out for the ceremony, she says, most will stay for about a week to go skiing, explore the natural beauty or adrenalin activities.

Thomas says elopement is a trend in the resort, as is small-scale weddings, with an increase of parties between 10 to 30 people made up of the couple’s parents, siblings and closest friends, in attendance.

Asked if that was to do with affordability, Thomas says it’s more about people shying away from the big, white wedding in favour of including a holiday with their loved ones.

“A lot of Australian couples and other overseas couples come here because it gives them an excuse to do a small wedding.

“The wedding itself costs them less, but when you factor in going skiing or doing a bungy, the economic impact for Queenstown, as a whole, is powerful, and, I think, underestimated.”

The average wedding costs between $5,000 and $60,000, and the association is dedicated to keeping that money here by encouraging couples to hire local vendors.

“Locals know all the nooks. For example, if it’s been raining for a week, they know it wouldn’t work to get married at Moke Creek.”

One thrifty couple who got married on a shoestring budget sticks in Thomas’ mind.

They borrowed their outfits, picked flowers from a garden, stayed in a camper van, had two mates living in the area as the witnesses, and hired a photographer from Queenstown Trading for a box of beer.

“It was really, really cool, and just shows there’s something for everyone in Queenstown no matter the budget.”