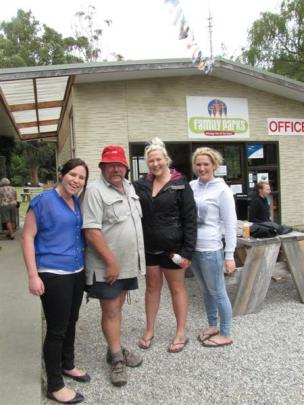 With camp manager Mike King at the Lake Hawea Holiday Park are (from left) Annie Dickie (21), Connie Waddingham (20) and Holly Heaps (20), all of Balclutha. 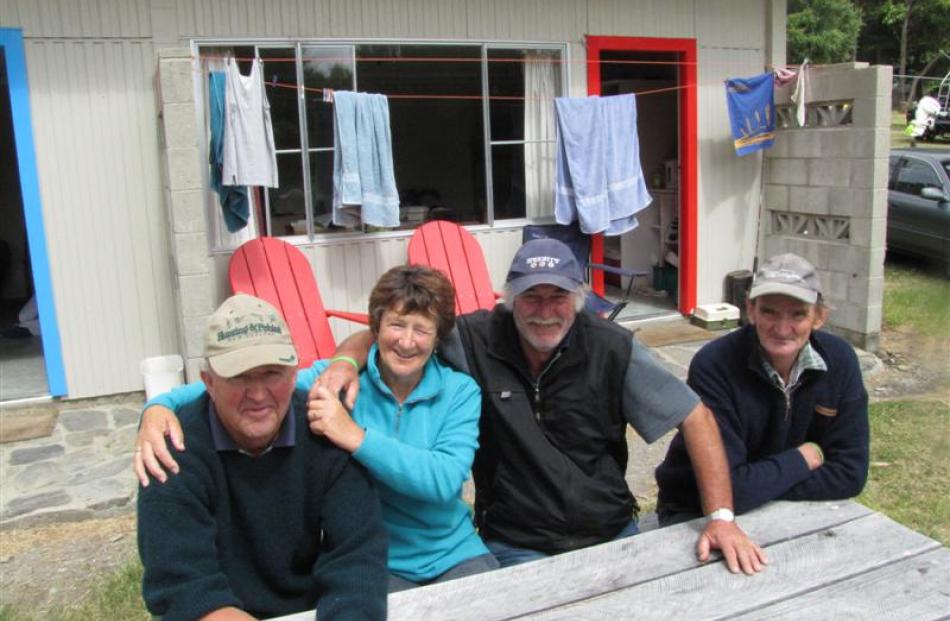 People watching while waiting for the wind to drop are from left, Robert and Lori Rusbatch, both of Ashburton, Ian Rattray of Hinds, and Graeme Smith, of Waimate. 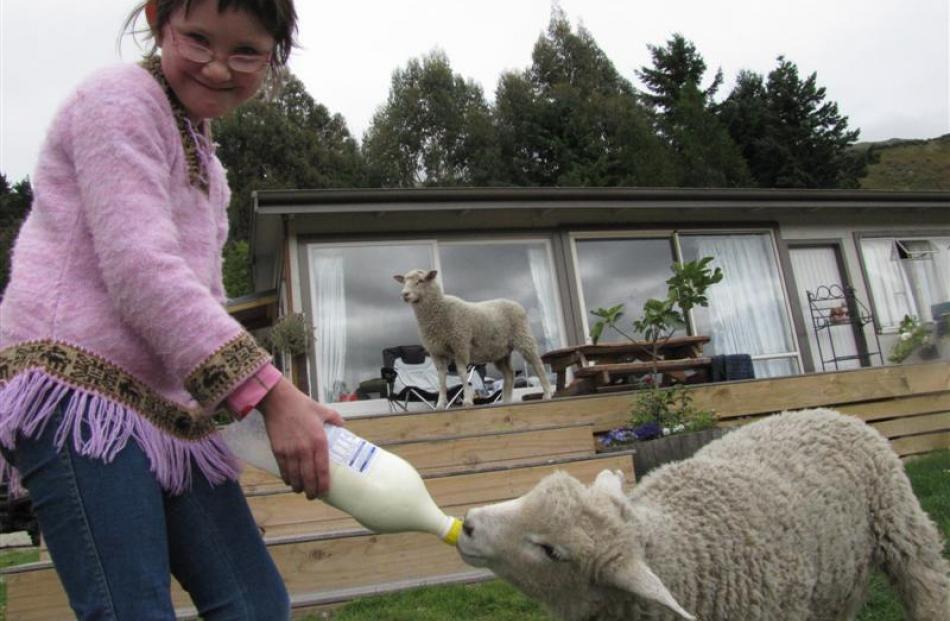 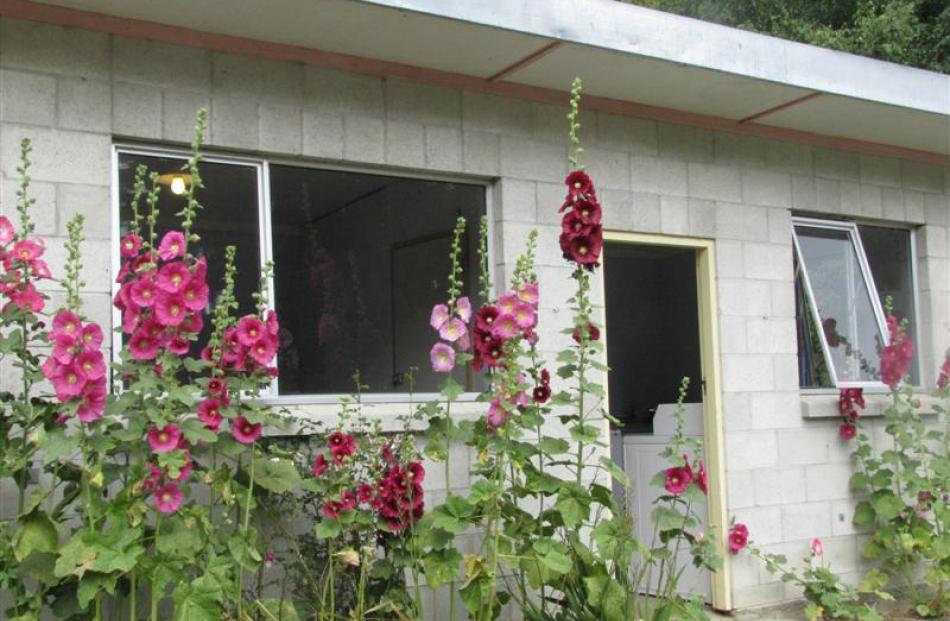 Hollyhocks brighten up the laundry wall. 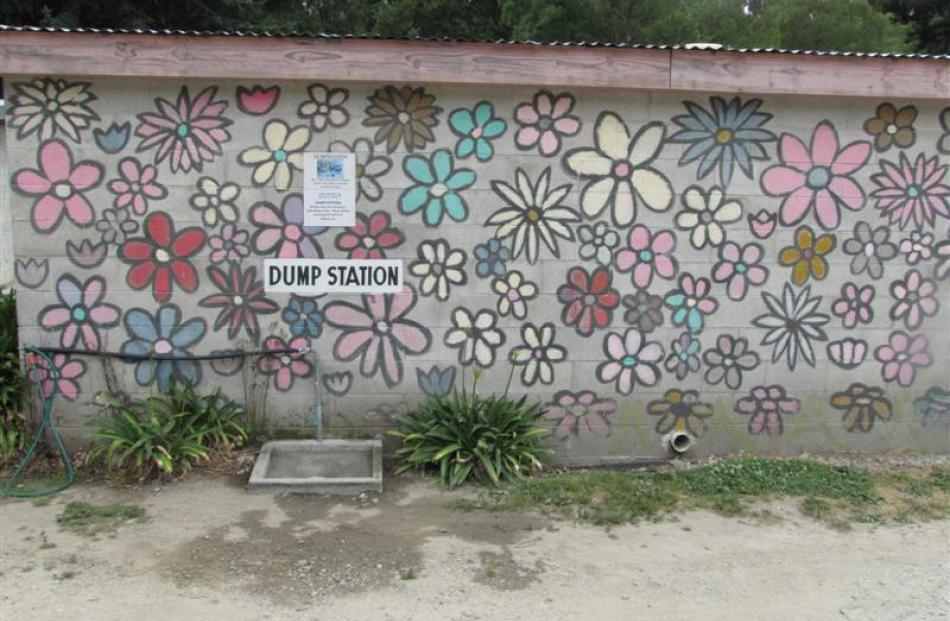 Painted flowers on the back of the dump station and laundry building. 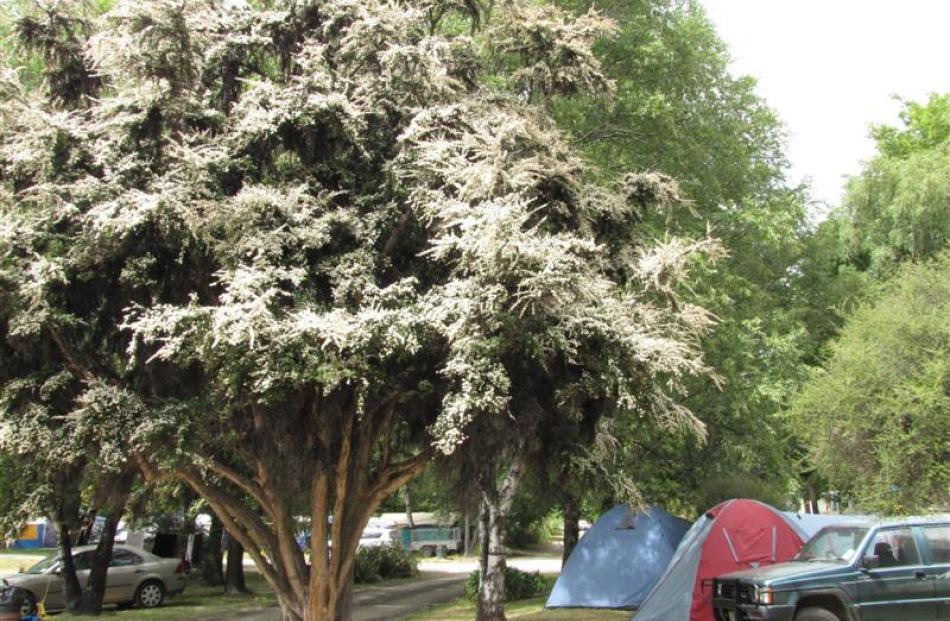 lowering kanuka are among the many trees providing welcome shade at the holiday park.

This summer, the Lake Hawea Holiday Park has been full of people escaping Christchurch earthquakes and liquefaction.

Although the attractions of the 30-year-old camp site are not a secret to many Cantabrians who regularly visit, this year several newbies have made their way there to escape the shakes that have been haunting them since September 2010.

Gina McGrosky, of Park View School, and her parents Chuck McGrosky and Heather Wright were among them.

They decided to come to Lake Hawea because they are friends of Lorraine and Mike King, who retired from their job managing Mt Albert Station in October 2010 and took charge at the Lake Hawea Holiday Park soon afterwards.

The only thing reminding the Wright-McGrosky family of home was that the tent was not level. Neither is their blue stickered house, which has to undergo major structural repairs.

Gina was delighted to be staying for four nights because after just one night she was already in love with the camp.

The playground and two chubby 3-month-old pet lambs Patrick and Blossom (both "boy sheep") were some of the best things, she said.

"Lorraine makes the milk powder up and we put teats on the bottles and we go feed the lambs," she said.

The only family member to stay at home in Christchurch is Fergus, Gina's pet West Highland terrier.

He was having New Year's Eve with Gina's cousins because dogs are not allowed in the Lake Hawea Holiday Park.

When Mr and Mrs King first moved into the camp, they lived in their camper.

In August this year, the camp leaseholders, Richard and Sarah Burdon, purchased an old bach from 126 Lismore St, Wanaka, and relocated it to the camp.

It has been renovated and extended and the Kings now live in a comfortable cottage with a grand view of camp sites laid out below.

The 1960s-vintage building has a history of relocation. It was originally from Christchurch and spent some time in Fairlie before moving to Lismore St.

"I call it Kings Castle because I sit here with my binoculars and watch people come in," Mr King said.

However, this time of year Mr King does not have much time to sit and survey his domain.

The Lake Hawea Holiday Park has the capacity for many hundreds and at least 300 campers this New Year's Eve were aged between 18-22.

Last summer, Mr King unceremoniously ejected a group of teenagers for behaviour reasons and he was delighted not to have to repeat the performance this year.

It is just a short walk down a grassy slope from "Kings' Castle" to the concrete block office block, next to a dump station and laundry with cheerful flowers painted in a large mural across one side.

Both buildings have vivid red hollyhocks growing up the walls.

Many varieties of mature native and exotic trees planted over the years by the Cotters now grace the camp ground, providing sheltered pockets for tents and caravans.

Mr and Mrs King say they work hard to help campers get the spot they want.

All tenters have a choice, but the key is to book early for the next year, Mr King said.

"All some of them do is nothing, absolutely nothing. You think why, when there is biking, tramping, swimming. But some people don't want to do that because all year long, they've had to work, work work. So they don't want to do anything. And there is nothing wrong with that," Mrs King said.

"It is a lovely place. And it is a great way to meet new people," Mr King said.

By the administration block is a row of concrete-block tourist flats, occupied by a regular group of holiday-makers: Robert and Lori Rusbatch, of Ashburton, Ian Rattray, of Hinds, and Graeme Smith, of Waimate.

They have met every year for 10 years for fishing, yarning and relaxing.

They love that the camp is the sort of place where you can lose your car keys and someone will hand them in to the managers, they said.

"We've had grandchildren here and it is safe. It is friendly and the people who run it are helpful," Mrs Rusbatch said.

But sadly, the Christchurch earthquakes meant that the Rusbatch's grandchildren could not be with them this year, as they have moved with their parents to Australia to escape the shakes and make a new start.

During the last days of 2011, the Rusbatchs were still having fun and enjoying "people watching" while waiting for the wind to drop so they could go fishing.

"The silliest thing we've brought is the jet-boat. It is always windy," Mr Rusbatch said.

The most practical item they had was the electric frypan, Mrs Rusbatch said.

"We cook all our meat in it. And I'm waiting for the fish to cook in it."

Not all camp newbies are Cantabrians, with many from Otago also discovering the charm of Lake Hawea for the first time.

Among them were Balclutha women Annie Dickie (21), a sales assistant, and her friends Connie Waddingham (20) and Holly Heaps (20), who are both employed at a meat works.

The women were tenting and enjoying the "awesome" atmosphere so much that, although they had barely started this holiday, they were already planning their next.

"Heaps of people from Clutha always come up so we thought we would do something different and come too," Holly said.

As they did the rounds of the camp meeting other people, they'd also noted "heaps from Christchurch". The women planned to check the entertainment at the Lake Hawea Hotel and in Wanaka, swim in the lake and stay five nights.

The most practical item they had brought was an "extra comfy air bed" and the silliest thing was a hair straightener.

But the best thing to take camping were friends: "Having your friends, you always have a good time," Annie said.

Established: 1971 by Jim and Margie Cotter.
Where: Access from State Highway 6, about 200m northwest of the Hawea dam, five minutes walk from Lake Hawea village.
Area: 2.8ha on a total public reserve of 14.88ha. Lease expires 2037.
Leaseholders: Richard and Sarah Burdon took over from the Cotter family in 2009.
Managers: Mike and Lorraine King appointed 2010.