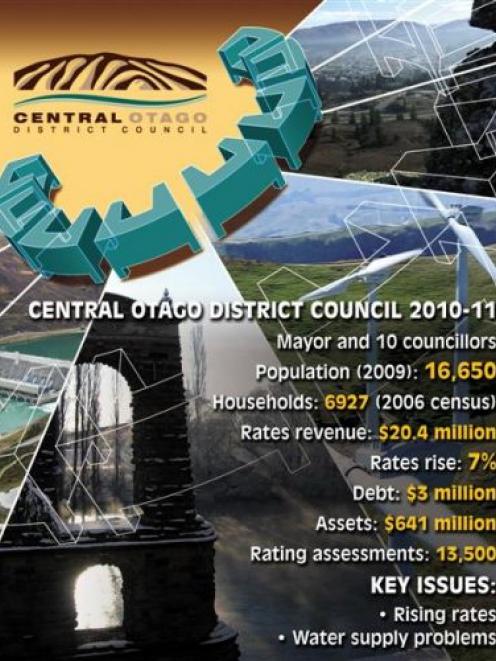 The top job in the Central Otago district has greater allure than a seat on the district council this year.

Three contenders will line up for the mayoralty, while no election is required for the council, as there are exactly the required number of candidates in each ward.

This year's crop of mayoral hopefuls are from Alexandra or within a stone's throw of the town.

Mr Lepper has served as deputy mayor for three terms and has been on the council since its inception in 1989.

He believes it is time for a change and that he has "served his apprenticeship".

As one of only two people around the council table who live and work in the rural sector, he hopes to draw strong support from that sector.

Mr Lepper has been chairman of Sport Otago for the past four years and is well known in multisport and kayaking circles.

The surprise entrant in this year's race for the mayoralty is Mr Hill, who is something of a "wild card".

Mr Hill is a mechanic who says it is time for a tradesman as mayor.

He already has some experience in local government, having served on the Alexandra Community Board for almost two terms, resigning in June 2007, citing concerns about the integrity of some of his fellow board members.

Concern about rates rises and the high number of council staff were among his reasons for standing as mayor.

Like Mr Lepper, he promises an "upfront" approach if elected.

Dr Macpherson says he is happy to be judged on his track record and believes he has the experience to deal with the "meaty" issues ahead of the councilHe had no sense of completeness about his work as mayor and said he had a long list of achievements on which to be judged.

Dr Macpherson is also a member of the Southern District Health Board and the Otago Polytechnic council.

He is standing again for a seat on the health board and plans to seek election to the Central Lakes Trust - a charitable trust which evolved from the former Otago Central Electric Power Board.

The differing leadership styles of the three mayoral aspirants will be one of the main factors voters take into account..

Rising rates and problems with water quality in several of the district's towns are the main campaign issues.

Although voter turnout is traditionally high in Central Otago, the local-body election campaign in the district is a low-key one.

Election hoardings and signwritten vehicles have yet to make an appearance.

The "new" district council is virtually identical to the current one, with nine of the 10 councillors being re-elected in their respective wards.

The only change is that Lynley Claridge, of Alexandra, who stood down to focus on her family and business interests, has been replaced by Martin McPherson, of Alexandra.

Mr McPherson, although new to the council, is a familiar face to many of the district's residents.

He has served on the Alexandra Community Board and is the blossom festival event manager this year.

If Mr Lepper is elected as mayor, a by-election will be needed to fill the vacancy he will leave in the council's Earnscleugh-Manuherikia ward.

As well as the battle for the mayoralty, much of the voter interest at local level is in the community-board elections.

Candidates outnumber seats on both the Cromwell and Maniototo Community Boards, and in each case, a new crop of contenders is challenging sitting board members.

No election is required for the Vincent Community Board, but a by-election will be held to fill one remaining vacancy on the Roxburgh Community Board.