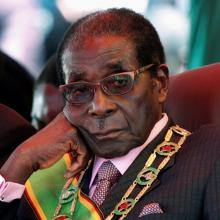 Robert Mugabe. Photo: ODT files
We should not beat about the African bush. Robert Mugabe, who died late last week, was a brutal tyrant with buckets of blood on his hands. He was responsible for Zimbabwe's ruin.

The catalogue of crimes is long and ugly. Africa has been plagued by "big men'', and he came to be one of the worst.

At independence in 1980, Zimbabwe was not without its issues. But its standard of living was higher than Singapore's and its civil service effective. It was much better off and had more potential than most under-developed, post-colonial economies. But massive mismanagement, brutality and widespread corruption did it in.

Yet, if Mr Mugabe had died in the 1990s, he would have been remembered as the hero he could have been. He came through the war for freedom and became prime minister on independence, then president.

Mr Mugabe was highly intelligent and educated, a teacher with an intriguing background. He was initially cautious and reasonably conservative economically, but he appeared to be moving in the direction of his supposed Marxist-Leninist-Maoist beliefs through spending on education and healthcare. Zimbabwe led the way in Africa in literacy and its primary healthcare expanded impressively. Yet, this was the same person who, with his cronies, looted the nation and presided over its impoverishment.

Like Nelson Mandela, he spent time in jail and appeared ready to preach reconciliation. This was despite the violence of the struggle. He was seen as the bright hope, and the world was willing to celebrate and support his triumph.

It was not to be. The loner as a boy was already ruthless during the years of the struggle and the overthrow of white rule. He might not have dressed in the archetypal army fatigues of the guerrilla leader, but he was severe with contenders and dissenters.

In the early and mid-1980s, his North Korean-trained Fifth Brigade terrorised and murdered in Matebeleland and he fostered tribal division, actions the West choose to gloss over. Rivals within his own party, and others, died in "mysterious'' car crashes over the years. Effective one-party rule was established through fraudulent elections.

Economic fundamentals were ignored and money that did not exist doled out, notably grants to "war veterans''. That and his invasion into the Congo crashed the Zimbabwe dollar and led to increased opposition.

It was the turn of white farmers, rural workers and opposition activists to be attacked in 2000. In 2005, his ``clean out the filth'' operation drove hundreds of thousands of shack dwellers into the countryside. Two years later, another campaign led to the beating and killing of opposition supporters across the country.

A quarter of the population fled the country as the economy imploded. Education disintegrated and hospitals ran out of medicine. Millions faced starvation.

Tellingly, the average life expectancy plummeted from about 60 at independence to 37 for men and 34 for women by 2006, perhaps the shortest in the world.

No wonder the populace cheered in the streets when he was finally deposed over a succession dispute in 2017. Unfortunately, Zimbabwe went from the bread basket of Africa to a basket case, where it remains at present.

Meanwhile, Mr Mugabe on his death is celebrated in Africa - and even in Zimbabwe - as a great liberator. He might have played an important part in the liberation of Southern Rhodesia, but long overdue freedom from unjust white rule was replaced by chains of poverty, hunger, oppression, dictatorship, corruption and brutality.

Mr Mugabe's legacy is not as a freedom fighter but as a tyrant who laid waste to his nation.

Pushed redistribution, equality for the "people". Loved to attack farmers, a common strategy for the left. Dedicated revolutionary, tear it all down, oops, can't build. Reminder: No revolution has ever left people better off, just a select few. Highly educated, he espoused the philosophy of Karl Marx.

Will he be studied in our schools as an example of what happens when you embrace hard left policies?

Lee if he gets elected.