An elderly Dunedin woman and "lovely, lovely soul'' is understood to have died in house fire overnight.

A neighbour said the Challis St, Vauxhall resident, believed to be in her 80s, was a "dear old soul'' who lived alone after her husband died in 2011.

The neighbour said he saw firefighters bring the woman outside and attempt CPR on her on the front lawn.

But sadly, she could not be revived, he said.

"She was a dear old soul, it’s just horrible.

"She was a lovely neighbour, a lovely, lovely soul."

Emergency services were called to the blaze in a single-storey shortly before 3am.

Fire crews at the scene of the house fire in Challis St. Photo: Stephen Jaquiery

A person was found inside the property and CPR was performed - but to no avail. The victim was pronounced dead at the scene about 3.30am, authorities said.

The blaze was brought under control about an hour later.

Police said a scene guard was in place overnight and police and Fire and Emergency New Zealand would examine the scene today and work to establish the circumstances of the fire.

Fire investigators from Dunedin and Queenstown had been called to investigate.

Smoke rises from the damage caused by a house fire in Challis St which left one person dead. Photo: Stephen Jaquiery 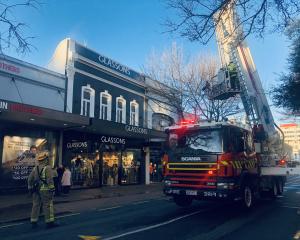 So so sad ,thoughts are with the family, Fire , police and Ambulance staff, who attended, neighbours and the person who passed. RIP,

So so sorry for the peoples loss. To comment again if I may, my mother is this age living alone in a similar unit in Dunedin with dementia, yet the authorities say she is fine and is not a risk, the Nurse retired so she no longer get any visits, another concern of mine is what happens when she lets in Joe blogs who is a scumbag. we have had two incidents over 6 years one of a high pressure salesman selling her a product that will help her walk better at a cost of $3600 lucky her credit card declined the limit and another lady selling her an alarm, both cold calling, that was cancelled and we went with St Johns.