Aurora Energy  might  not replace the number of poles it promised as part of its $30million fast-tracked scheme.

In a wide-ranging interview with the Otago Daily Times, the man tasked with leading the programme, Godfrey Brosnan, accepted it might not be possible to replace  by December all 2910 poles included in the original target.

Instead, he had included 1320 of the worst poles in Dunedin, Central Otago and the Queenstown-Lakes area in an initial target.

Once that initial target was met, Aurora would replace as many poles as possible.

The initial target came as staff and pole shortages meant Aurora was sourcing both from overseas.

Mr Brosnan also gave fresh details about the prospect of power outages during the programme, saying they would try to restrict them to between about 8.30am and 4pm when most people were at work.

He was pleased Mr Brosnan appeared to have scaled back the programme to a more realistic one, but remained concerned worker safety would be compromised, especially given foreign workers were being brought in.It would also barely touch the surface of the issue as roughly 800 new condition-zero and one poles were being discovered each year — a number which would be increased as more people worked in the field.

Asked if the new target meant the public were not getting the programme they were promised, Mr Brosnan said: "I think that’s almost a fair perception."

The former army engineer, whose steely resolve was apparent during the ODT interview, disputed claims the programme was doomed to fail.

"You are doomed to fail if you don’t start. 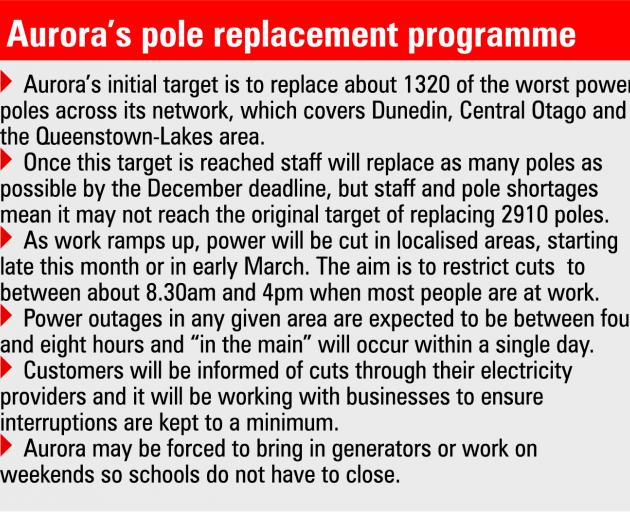 "I’m not going to get into the tennis match with [former programme director Jarrod Stewart] and Richard. All I can say is what my approach is.

"What you do is you just race for it.

However, since the programme was announced last October it had become apparent there was a shortage of both poles and staff.

"The interesting thing is that after your ODT articles appeared, the market tightened somewhat with team availability and pole numbers."

This supported Mr Healey’s claim other lines companies around New Zealand had bought up replacement poles following intense media scrutiny of Aurora in the fear they would be under the spotlight next.

Mr Brosnan would not be drawn on whether this was the case.

"All I can say is I can’t find poles and we are going further afield to do so."

This meant it was sourcing wooden, steel and composite poles from overseas, with the condition that all poles met New Zealand and Australian standards.\ 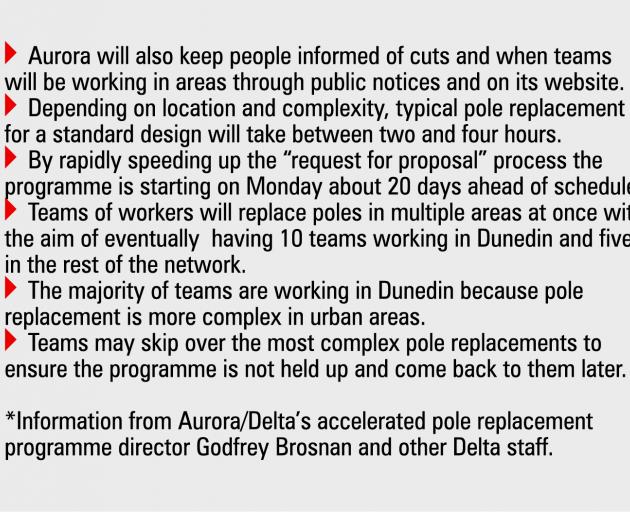 The programme was starting next week,  20 days ahead of schedule, with two teams of staff working in the wider Green Island area.

This would ramp up to nine teams and he hoped this would increase to 15 by April.

It would involve 113 people working on the programme, 40 of  them internal Delta staff and the rest from elsewhere, including overseas.

He and Delta operations manager John Campbell disputed any suggestion bringing in workers from overseas would compromise safety, saying they would be experienced  and qualified.

"It’s not new for the industry to have outside teams working on other people’s network," Mr Campbell said.

Mr Brosnan was unapologetic about the fact Aurora would re-test poles and not replace any deemed up to scratch.

"I don’t want to send teams out and waste their efforts in pulling a pole out [that is not compromised]."

The programme needed to be based on ‘‘science and engineering’’ and not perception.

"One thing that the public needs to realise and I had to realise as well, is some of these wooden poles are ugly, but it doesn’t mean to say they are falling down."

Delta marketing and communications manager Gary Johnson emphasised the methodology used to retest poles would be independently verified and WorkSafe would need to be satisfied with its methods.

Aurora did not answer a follow-up questions about whether the programme was expected to come within the original $30 million  budget and about how many new condition-one and zero poles were expected to be discovered this year.

When is our Mayor going to sack the half wit clown that runs Delta this is a council company owned by the rate payer and the ratepayers want action on this mindless and money wasting stupidity,Grady Cameron is not fit to run a kindergarten on his overbloated half million dollar outrageous salary.