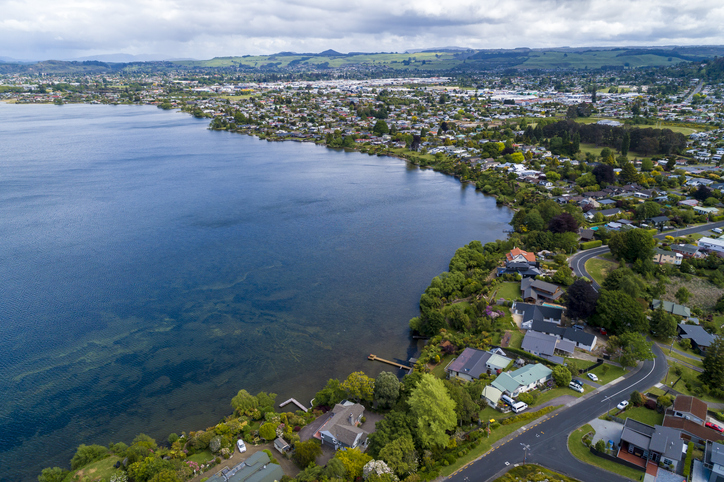 They say they were given no warning of where they were going and weren't given any time to go to the toilet or even get a bottle of water before being herded on to the bus.

"Everyone responded in disbelief, they thought it was some kind of joke. But it became clear once we really were out of the city limits that we were on our way to Rotorua," one traveller, who did not want to be named, told the New Zealand Herald.

He said he arrived from Sydney around 5pm on Saturday with the presumption he would be travelling to Auckland's CBD to check in to a hotel.

The man was escorted to a bus by police, and it was only when he was on the road that the bus driver alerted him and fellow passengers they were heading to Rotorua.

"People were generally distressed by the situation, some of whom had been travelling for days from Europe, some were elderly, and others on another bus had children."

He said he was grateful the Government was providing quarantine facilities for returnees - but was concerned about the lack of consideration shown towards him and other passengers.

"But secondly, there was a lack of consideration concerning our bus journey. Because there was no communication before the fact that we were told we were off to Rotorua so we couldn't prepare for a three and a-half hour bus ride.

"It would have been a reasonable thing to do right, let us go to the toilet and fill up drink bottles, just things like that."

Rotorua's National MP Todd McClay echoed the man's concern, saying it was outrageous the Prime Minister didn't bother to tell anyone about this.

"Some of the hotel staff didn't even know - we need answers now."

Multiple reports on social media from travellers shared similar responses, saying it was incredibly upsetting not know where they were going after a long trip.

"We weren't told where we were going, so no chance to grab food, water or take a bathroom break," Ellen Falconer said on Twitter.

It comes after fears from residents who live atop the Stamford Plaza Hotel where 12 busloads of people were intended to head for quarantine.

The 149 Stamford apartments above the eight-storey hotel are home to about 300 people, many of whom are older and at higher risk of severe complications or death if they catch Covid-19.

But authorities yesterday said no decision had been made on using the hotel.

Now, it's understood Rotorua will be one of the new hubs for managed quarantine of returnees as Auckland's facilities are overflowing.

One person on Facebook said Rotorua's Ibis Hotel was given two hours' notice that returnees would be arriving.

Another said: "There are two buses heading [to Rotorua] and no one has informed us on what is going on or if we will have onward travel once our 14 days are up ... I have a flight leaving for Christchurch the next day and my stress levels are running pretty high."

One person staying at Auckland Airport's Novotel Hotel said she had seen at least 20 buses leave the airport yesterday and there were another six buses waiting for passengers last night.

Five confirmed cases of Covid-19 in the past week have been returnees in managed isolation or who have just left isolation.

On Friday, two new Covid-19 cases were identified in a couple near the end of their 14 days in isolation at the Grand Millennium Hotel in Auckland, who had flown in from India on June 5 on a repatriation flight.

They were tested as part of new routine testing on day 3 and day 12 of mandatory managed isolation for all arrivals.

The Herald has approached the Ministry of Health for comment.

According to Director-general of health Ashley Bloomfield, the couple had no symptoms and had been transferred to a stricter quarantine facility at the Jet Park Hotel.

Their positive result follows that of a returnee from Pakistan, confirmed on Thursday, and two sisters confirmed on Tuesday who had returned from Britain.

They had been staying in the Novotel Ellerslie and after the death of their mother, were granted early release to drive to Wellington to comfort their father, but tested positive in Wellington.

"As we bring more kiwis home, we need to expand our managed isolation facilities and review our processes to ensure border protections remain robust. Repatriation needs to happen in a safe and managed way which will impose additional inconveniences on travellers, says Webb.

"And while I sympathise with new restrictions travellers face, I make no apologies for the tough rules that are in place. Those returning to New Zealand will require personal sacrifices in order to keep the country free of COVID-19 spread."

He says Government agencies worked together with the local District Health Boards to open two new hotels in Rotorua to ensure the safe transition of people back into New Zealand and the community after their 14 day managed isolation.

"In total, 232 returnees were transferred by seven dedicated buses from Auckland International Airport following their arrival on three flights from Australia yesterday.

"The buses had a bathroom stop at Waharoa. Protocols were put in place to ensure the bathroom facilities were cleaned after the stop."

In Rotorua the people were moved off the bus in groups and meet with Government and health staff. They were given a briefing, completed medical forms, seen by a nurse, received food, and then taken to their rooms.

Webb said they will be given more information today.

"I acknowledge that those arriving on this flight had an expectation they were completing their managed isolation in Auckland. However, an increase in arrivals returning to New Zealand has required alternative plans to be put in place."

The sense of entitlement so many returning travellers exhibit is astounding.
And then not being willing to put their name to the complaint shows a level of cowardice that is also astounding.
What does it matter where they are in quarantine? They should be grateful that they were allowed back at all.

Agree totally, well stated! And to add it’s all paid for and gov funded! Very entitled, maybe user pays needs to be implemented and will promote appreciation of the cost and quality of the care let alone being allowed to return at all! I wonder if flights were paid for also?

Entitlement?? should we treat our fellow humans like cattle and give up our civil liberties because we're afraid of a coronavirus??
"Those who would give up essential Liberty, to purchase a little temporary Safety, deserve neither Liberty nor Safety." - Benjamin Franklin

I am fast losing patience with these people returning to NZ and complaining about having to stay in a hotel for 14 days to help keep covid out of the country.Surely it is the least they can do . Most countries that even let you in do a far harsher regime of managed separation. The cost to the country with another outbreak is not worth the risk to listen to ungrateful whoever complaining that 14 days is to inconvenient to wait to get in to a up to now virus free country. You should be grateful and do not expect to be in contact with anyone physically from outside your bubble so what is the difference whether its here or over there that you do your isolation.I feel like I speak for many kiwis when I say if 14 days is to much for you don't come here.

What a bunch of whingers. We (AKA government) are spending millions for these people to come home and then accommodate them in hotels that many of us can rarely afford for a few days. They get fed and looked after. They are better treated than the poor who struggle in these hard times. GET OVER IT please. MAybe they prefer to go back from wherever they came from. It is a privilege to live in this country.

And then National abusing the situation once more to nag... Like spoilt children.