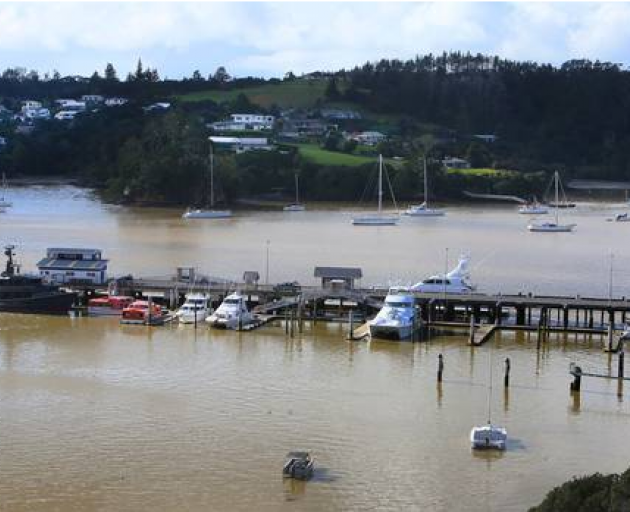 The German-flagged vessel is being held by Customs at a quarantine dock in Opua. Photo: NZ Herald
The crew of a German yacht have been detained in the Bay of Islands after they broke New Zealand's Covid-19 border restrictions.

Their 16-metre vessel, Anita, arrived in Opua yesterday afternoon despite being declined permission to enter the country by the Ministry of Health.

The three crew, all German nationals, have been refused entry and Immigration New Zealand was arranging for them to be flown home on the next available flight.

"New Zealand's border restrictions are in place for a very good reason – to help stop the spread of Covid-19 and protect the health of New Zealand's population," said Peter Elms, Immigration NZ's national manager of border and visa operations.

"The action by these individuals to knowingly travel here without approval demonstrates a blatant disregard for New Zealand's border restrictions and will not be tolerated."

The Ministry of Health said the three crew had all returned negative Covid-19 tests and had been isolated on board their yacht for more than 14 days.

Elms said the crew had requested an exemption to the Covid-19 border restrictions but chose to travel before getting approval.

The crew advised the ministry that it intended to continue its journey to New Zealand. That information was passed to Customs, which intercepted the boat yesterday afternoon.

Anita was met by the Customs NZ patrol vessel Hawk V and escorted to a quarantine dock at Opua marina.

The Customs spokeswoman said the vessel was liable for seizure and duty liability and was being held in Customs control for further investigation.

A ship tracking website says that Anita had last docked at Taiohae on Nuku Hiva Island in French Polynesia.

The 4000km journey to the Bay of Islands took two months and 18 days, the website says.

A Ministry of Health spokeswoman said the crew had applied for the exemption on humanitarian grounds and to repair the ship.

"While there were aspects of the case that were unfortunate, these did not rise to the threshold of a compelling humanitarian need.

"As much as our country is known for its hospitality, New Zealand cannot become a maritime Covid-19 safe haven for everyone in unfortunate circumstances."

Elms said the refusal of entry to New Zealand could have long-term consequences for the crew. Their visa waiver status could be suspended and it could affect their ability to travel to other countries.

"The swift response to this situation should send a clear message to others who might consider doing similar. Attempting to breach New Zealand's border controls is a serious matter and will be dealt with accordingly."

A ban on foreign vessels was relaxed in early September to allow foreign fishing or cargo ships to enter New Zealand, or vessels which had been granted an exemption by the Director-General of Health.

Vessels needed a compelling reason to get an exemption, such as refuelling or resupplying or delivering to a business for repairing or refitting. Exemptions could also be granted for humanitarian reasons, but this was unlikely to be granted solely for financial loss or for vessels "wintering over" - a common practice by boats during the Pacific's cyclone season.

To get exemptions, a crew must also have been in isolation on board their vessel for at least 14 days since leaving their last port or taking on crew. Any crew must also get a negative Covid-19 test before they enter the community.

If anyone wanted to come ashore, they had to get the approval of a Medical Officer of Health and all other crew must have returned negative tests.

The yacht should be seized and sold to the highest bidder to defer costs. Make it a strong message to the others who don't think we are serious about our border restrictions.

"To get exemptions, a crew must also have been in isolation on board their vessel for at least 14 days since leaving their last port or taking on crew. Any crew must also get a negative Covid-19 test before they enter the community" Yet there's this "The Ministry of Health said the three crew had all returned negative Covid-19 tests and had been isolated on board their yacht for more than 14 days", so the ministry has grossly overreacted and not to mention the theft of the German citizens yacht.

You think it won't be returned?

Throw the book at them, seize the yacht and make it impossible for them to come back.
They were told not to come and yet they did. They say they haven't docked in over 14 days, but that is just their word.
There are lunatics out there who would love to see NZ reinfected, perhaps not these illegals, but the next boat could be. The punishment needs to be severe and clear, when you are told no, it means no.
These people aren't refugees, they are just entitled rich people who think that NZ laws don't apply to them.