Clare Curran and son Callum vote in the Taieri electorate. PHOTOS: FACEBOOK
Waitaki MP Jacqui Dean has been relatively low-key in her housing portfolio — barring an embarrassing slip-up concerning state housing numbers on live TV — but that changed yesterday with the release of National’s housing policy.

To be fair to Mrs Dean, she inherited the housing policy only a couple of months ago as part of the reshuffle occasioned by Judith Collins’ unexpected ascension to the party leadership.

Housing is a big and complex portfolio and even with the background of having been a local body politician and associate minister for local government it is reasonable to expect you would need some time to get up to speed.

That said, the timing of this policy release was interesting from a strategic point of view.

National has long realised Labour is vulnerable on housing — Ms Collins made former housing minister Phil Twyford’s life a nightmare with her forensic questioning on how KiwiBuild was going, to the point that Mr Twyford is no longer housing minister and KiwiBuild had a "re-set".

Given that background one might have supposed that housing would be one of the first policies released, or at least that its release might have been accelerated after Ms Collins’ own reflection following the first televised leaders debate that she should have made a bigger deal of KiwiBuild.

In her policy announcement, Ms Collins pitched National as the party of home ownership, calling it "an important part of our social fabric".

That is a statement intended to chip away at a bedrock Labour principle of a right to decent housing — the presence of Michael Savage looking over Jacinda Ardern’s shoulder in her party’s first campaign advertisement was a subliminal reminder of that famous footage of the first Labour Cabinet helping the first state house tenant move into their new property.

The policy included already announced plans such as emergency legislation within the first 100 days of a National government to amend the Resource Management Act, and its eventual repeal and replacement.

However, it also included new commitments to rent-to-own or shared equity schemes, and a billion dollars for community housing providers.

For her part, Mrs Dean emphasised the proposed RMA reform, which would require all councils to immediately allow greater urban development and establish an accelerated consenting process. 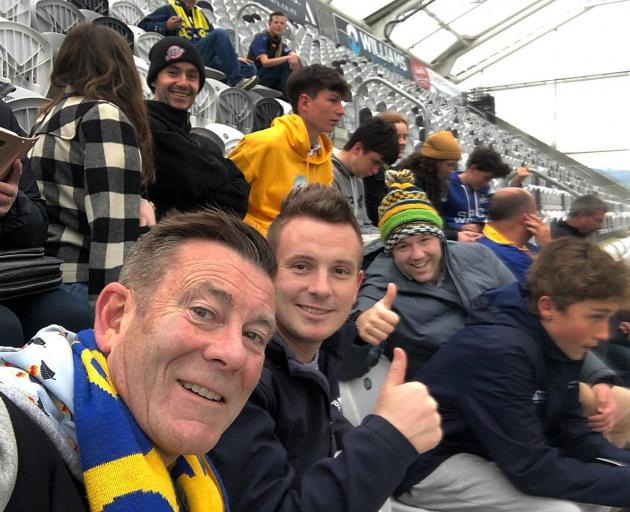 "This approach will improve housing affordability," she said.

"It will mean your children will have the same opportunity you had to purchase their own home to raise their own families.”

However, it was housing elsewhere which was dominating Mrs Dean’s thoughts yesterday.

The devastating Lake Ohau fire is in her electorate, and having dashed to Auckland at Ms Collins’ request for the housing policy announcement, Mrs Dean planned on getting back as soon as possible to offer whatever help she could.

Retiring Dunedin South MP Clare Curran was one of the early voters in the new seat of Taieri over the weekend, along with son Callum, who was voting for the first time.

Down the track part one

Last week he was an interested spectator at the first Forbury Park greyhound meeting in many months.

Both the dogs and horses returned to the venue last week, their lack of racing dates being a major issue which Mr Patterson has lobbied the racing minister — coincidentally enough, his party leader, Winston Peters — about.

Down the track part two

National was out in force at Otago’s first — and, sadly, final — Ranfurly Shield defence on Sunday, with Dunedin candidate Michael Woodhouse and Taieri candidate Liam Kernaghan bumping into outgoing Southland MP Hamish Walker in the crowd.

The trio will no doubt be hoping their own blue team does not come a similar cropper in a fortnight.

■ For the last two weeks of the election campaign, Southern Say will run Tuesday, Thursday and Saturday to keep you up to date with the southern campaign trail.

Some, they go to the Rugby.

One, she is on the Road, meeting Taieri constituents.

Jacqui Dean and national have enough cheek for another row of teeth, especially over claims of a housing crisis. They under the leadership of Stephen Joyce, (and don't try and tell me that Stephen Joyce wasn't the true Leader of the National Party), spent their last 9 years in office both creating and denying the housing crisis. To claim now that they have the answers is just laughable. To cristicise the Govt for their attempts to clear up and rebuild the disaster that national created is just ridiculous.