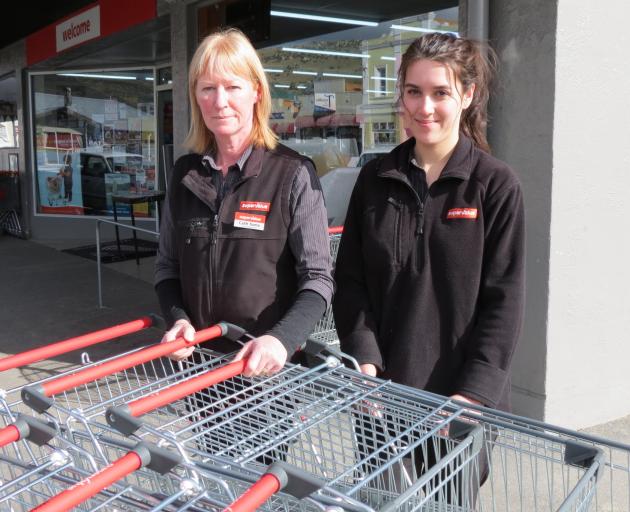 Supervalue Roxburgh co-owner Cath Toms (left) is worried about the impact on business and on staff such as Reggae Matchitt (right) due to a lack of seasonal workers living nearby over summer. PHOTO: YVONNE O’HARA
Roxburgh's business community is bracing for the economic fallout from the loss of ni-Vanuatu workers and backpackers for the coming fruit harvest, and jobs are on the line.

In Roxburgh, the negative impact on the town’s business community will be felt keenly.

Co-owner of the town’s supermarket, Supervalue Roxburgh, Chris Toms said yesterday for him, his wife, Cath, and co-owners, Ian and Angela Carhill, the loss of ni-Vanuatu workers would be compounded by the lack of backpackers.

Added together, he believed these factors would mean their takings would be down 20%.

In the more than a decade since RSE workers had arrived in the Teviot Valley, the business had adapted to cater to their needs, Mrs Toms said.

"We sourced from Auckland taro, and root vegetables from the [Pacific] Islands."

Other products in stock were bulk rice and "a lot of canned fish".

Mr Toms said in the years ni-Vanuatu workers had been coming to the valley, they had diversfied their diets and were buying other meat such as chicken.

He said the workforce were "very modest spenders", but estimated each RSE worker would spend about $60 per week in the supermarket.

To mitigate losses, staff at the supermarket may have to be cut, or have their hours reduced, particularly on the evening shifts when the workers typically visited the store, he said.

For Ann-Marie Gardiner, who offers more than 80 beds in the former Goldfields Hotel in Roxburgh, the former Ettrick Tavern and three other properties as an accredited RSE accommodation provider, her biggest concern was for her staff.

She employed cleaners, gardeners, a full-time handyman and a man with intellectual disabilities.

"They all rely on that business for their income.

"Their jobs will be in jeopardy if we don’t get those guys [RSE workers] back."

Highland Pharmacy owner Alastair Forbes said business was part of the "collateral damage" of the decision not to let the workers return.

"The guys have disposable income and are a significant customer base for us over the summer season."

Trade in Roxburgh was seasonal and doubled over summer compared with winter, and RSE workers were an important part of that, he said.

He also ran a bus service to take the workers to work before and after his school run.

I find it hard to be sympathetic to these people. They are the authors of their own misfortune. They are trying to cast blame for the negative impact on businesses in their community on the Govt. The fault lies entirely on with the fruit growers and they should be adult enough to own up to it.
Time was that they used to get by with out foreign labour, there was a community of fruit pickers who would come year after year to pick their crops. These were all born and bred NZers who were pleased and happy to do the work. Then they stopped coming. Do you know why? Because the fruit growers stopped paying a competitive wage, stopped maintaining accommodation at a reasonably livable level and grew their profits. Over the years they've become reliant on cheap labour who will tolerate sub standard accommodation and conditions and now they're paying the price.
Welcome to the free market fruit growers It's a two way street called supply and demand. You need to adjust your thinking, stop blaming others and get your act together if you want to survive commercially.

My family have been in Central Otago fruit a long time. Grandad drove in the light wagons to Lawrence well before WWI.
I've visited family most years since 1950.
In the 1950s a high proportion of the pickers were Brit migrants, with family traditions of working the orchards of Britain for their summer holiday. There was a camp (with a swimming pool) opposite the factory.
Also a lot of university students working their summer holiday. As a child I was fascinated by their smoko stories.
During the 60s - 70s the 'pom' migrants got older and home-bound, and NZers became ever more citified.
The NZ market became ever tighter and people paid less for fresh fruit in the supermarkets. Imported bananas and oranges became the norm, and were cheap. NZ stonefruit prices to orchardists shrank. Things got tight. People stopped driving from Dunedin to buy cases of apricots to bottle. The factory ran into hard times.
The problems in fruit are many. Mass importation of cheap tinned fruit from South Africa, Chile and China has put the kibosh on local production. Supermarket monopolies have squeezed margins for growers.
Money out depends on money in. Few city dwellers want to work on orchards.

An interesting history.
There is one comment that interests me. That is about supermarket monopolies squeezing the margins for growers. This is what the Labour Govt have promised to investigate if re-elected. I hope Richard Rowe and his family and other growers are going to participate in this investigation and tell their stories of supermarket practices. Some real examples of the pittance they are paid as growers against what supermarkets are selling the fruit for will be very interesting. Likewise vegetable growers. It's time the NZ public knew just how badly they are being ripped off.
One other comment, if the NZ cannot grow fruit at a competitive cost on the free market then it's time to grow something else. Let's hope the cannabis referendum passes, that could be a new cash crop for Central Otago. No problem getting pickers for that.

Easy enough ... if land prices were low, if labour costs were very low, if taxes were negligible, if environmental rules were near nonexistent, if social conditions were appalling, then of course New Zealand growers could compete. But would we want to live in such a country?
The problem is not the competitiveness of our growers, it is finding pickers - and seemingly for arbitrary reasons the Government has decided to block this. Perhaps some couch-inhabiting, TV-watching nephews may pop along to help out? I have doubts. Orchardists need to get their crops picked. New Zealand needs to get those crops picked and sold.
Promises to review monopolistic practices are trotted before most elections. Then put back in their wrapping until next time.

Cannabis grows well in Northland, and under lights everywhere. The market would soon be saturated.