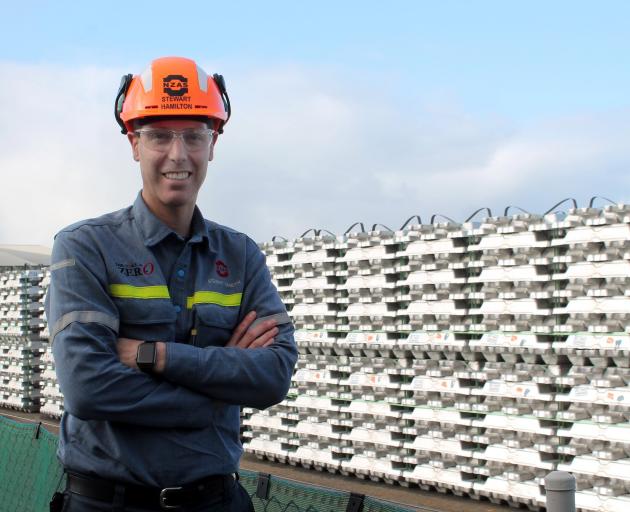 New Zealand Aluminium Smelters chief executive Stew Hamilton is leaving the company. PHOTO: LUISA GIRAO
The boss of the Tiwai Point aluminium smelter, whose final years were defined by the company's threat to abruptly close, is leaving for a new job at Mercury, one of New Zealand's largest electricity companies.

Hamilton, who joined NZAS as a graduate engineer 22 years ago, said the new job would be "exciting" but the move was a difficult decision.

"Having started my career at NZAS as a graduate engineer I feel like I have been a part of the NZAS family for most of my professional life, and am very grateful for the support and friendship the team has shared with me," Hamilton said in a statement.

"I came back to NZAS in 2018 to lead a team that runs one of the best operations in New Zealand and around the world. The last few years have been very challenging and I am proud of what the team has achieved over that time."

Hamilton's time at the smelter has been dominated by at-times tense negotiations with the Government and electricity company Meridian about the smelter's future.

In 2019, Rio Tinto announced a strategic review of its New Zealand operations - made up of its almost 80 per cent stake in the smelter - with Hamilton claiming the company needed tens of millions of dollars a year in lower electricity and transmission prices.

Eventually a deal was struck with Meridian, which was sufficient to see the smelter remain open until at least 2024, but talks with the Government over transmission relief, after the two sides could not see eye to eye on clean up plans for the smelter, which is home to thousands of tonnes of toxic materials.

Hamilton said he was "inspired by the team's incredible commitment to safety, to looking after each other and ability to keep focusing on making some of the best, lowest carbon, purest aluminium in the world. I leave in confidence that the Tiwai team will continue to perform at the highest level."

"The smelter has been going through a very public period of transition, and Stew's commitment and leadership has been hugely valued throughout this time."

The role "will be integral to supporting the contribution Mercury makes to New Zealand's transition to a low-carbon economy", Hawksworth said in a statement.

"Stew is uniquely positioned in terms of the perspective he offers, and the experience he brings in operating hugely complex assets in a rapidly changing environment," said Hawksworth.

Hamilton will join Mercury, which is 51 per cent owned by the Government, in the third quarter of 2021.

Oh cool. Now maybe Mercury will threaten to close abruptly to leverage a subsidy out of the Government too.