Cr Aaron Hawkins is calling for a bus route between the Dunedin Airport and the city. Photo: Gregor Richardson
The regional council should commit to providing an airport bus service for Dunedin, a city councillor says.

The Otago Regional Council has said in its long-term plan it would undertake a feasibility study for a bus between the city and Dunedin Airport.

At a hearing for the plan in the city yesterday, Dunedin City councillor Aaron Hawkins urged them to go "one step further" and actually commit to the service. 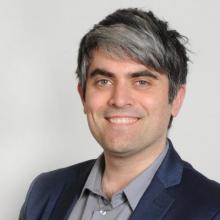 "Don't be scared of trying and failing. All serious and successful cities have one. It would be a huge addition to the city."

However, this should not be funded through money intended for Dunedin's commuter bus service, he said.

The money should come from general rates or reserves, as it would benefit the whole region, he said.

The city council received a high level of correspondence about bus services, which it did not operate, Cr Staynes said.

Please no! not another drain of ratepayers funds. Let Uber start operating first and we should see the cost of an Uber from CBD to the Airport be approx $30 (based on my experience overseas- Melbourne/Sydney), not the userous $90 taxi fare.

Most non-peak time bus trips already are run at a loss- we do not need new losses- leave it unto the private sector.

What would a bus cost? what route would it take? I think the cost would outweigh the usage wake up Diesel buses taking one or two people to the airport just like the Diesel trucks picking up the same type of Rubbish on the same day around Dunedin, most tourists we have would not get a bus I would not , shuttles may have refined the process and would have caused the decline of Busses to Airports. - Pot calling kettle Hawkins 'Don't be scared of trying and failing' I think this is the current councils motto but they are forever failing its people and don't care about the cost. That is correct Hawkins 'All serious and successful cities have one' Dunedin isn't a city thanks to the such like of Cull, the Greens on council holding the place back- wake up. Dunedin is a town. town. If you don't want to pay for a taxi, shuttle or throw a few Dollars to friends to drop you off, how about jump on your push bike and cycle to the airport.

Methinks Councillor Hawkins may have picked a fight with every Cab and Shuttle company/owner/driver in Otago and I can't wait to see the outcome (love a good action/horror movie with buckets of blood, gore, and body pieces laying around) ... ;-)

Maybe Councillor Hawkins would be better off trying to get dunedin Airport spelt correctly, or should I say "Gramatikalutised" ... don't panic, it's "Council" terminology and I don't expect the lay person to comprehend it.

When I was at school, gramma/ar/er was very important, almost more than spelling ... Letters at the start of centinces and "place names" all begun with a CAPATIL letter and I do believe that dunedin is a placename and should be spelt Dunedin ... Korect ?!

There's an old song by a now dead singer ... "you gotta know when to hold 'em - and know when to fold 'em" ... Good advice for Councillors just don't seem to comprehend the definition of "limitations" ... e.g. when to pick a fight they can actually win, or know depth of ratepayers pockets and/or limits of ratepayers frustrations.

The big question is :- As this is a CAPATIList society we live in ... am I allowed to sell tickets for this fight ??

I commend you for being able to offer respect to Hawkins by addressing him with 'Councillor', I've tried but I can't manage to do it, Cull is in the same boat. How much are tickets and will it be handbags drawn at 10 paces type of fight? Rate payers are sick of the BS results from councillors stand fast a couple of them.

The shuttle buses we currently have work well and are comfortable and affordable, as well as offering a personalized service. The drivers are all excellent and friendly.

If it ain't broke don't fix it. Cr Hawkins clearly needs to find something better to do with his time than suggest valuable businesses and livelihoods be destroyed.