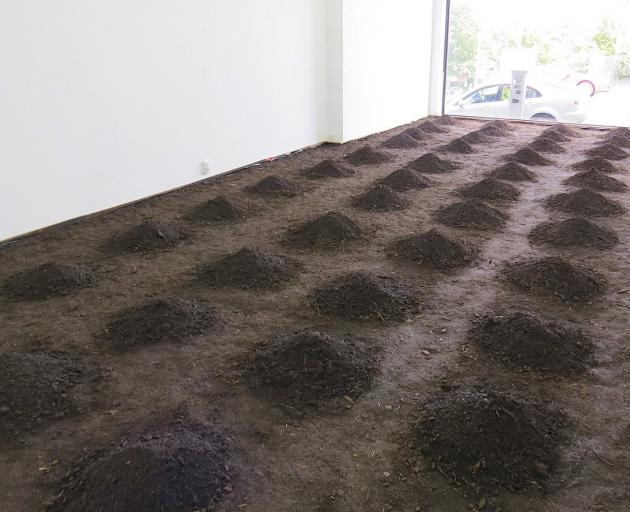 Land art is a form of conceptual art which involves the shaping of parts of the natural environment for aesthetic purposes. It is almost always found outside the gallery space, using the land where it is. In ‘‘Te Kete Rokiroki’’, Hohua Thompson has reversed this process, bringing earth into the art space in order to underline a connection with the soil and a re-establishing of a link with the land.

Thompson shows that while you might take the tangata out of the whenua, you cannot disconnect the whenua from the tangata.

The exhibition's title references the Te Arawa migration canoe and Te kete-rokiroki-a-Whakaotirangi, the precious basket in which kumara were first brought to Aotearoa.

From here, the link to the almost sacred nature of kumara and its importance in the traditional sustenance of Maori is but a short step. In ‘‘Te Kete Rokiroki’’, Thompson creates a kumara plantation within the gallery, producing a venue which becomes a virtual temple to the crop, a standing place, and a discussion space with strong links to the land.

By the end of the exhibition, it is hoped that the first shoots will begin to appear in the grid-like arrangement of planted kumara, a grid which itself references the natural rhythms and patterns of traditional Maori art.

The collage works, the Urban grids, take the form of busy patterns of intersecting lines created from thin strips of paper which have been hand cut and layered on to a base. As the name suggests, they have the busyness of urban street maps, and have something of the air of satellite views of densely packed cities.

The hand cutting and layering of the paper gives the works a necessary random element. The busy nature of the collages is greatly enhanced by the brightly-coloured paper strips, although perhaps the most effective of the pieces is the quieter Urban Grid #2 — White, in which strips of black, grey and white produce a monochrome lattice.

The intriguing photographic works make up the remainder of the pieces on display. These are created by placing laser-printed photographic images face down on to wet, plain-painted surfaces and then ironing them. Once dry, the paper of the print is rubbed off, leaving a distressed photographic image which is then worked by the artist with paint. The resulting pieces have a pleasing antique feel and effectively bridge the gap between realistic and impressionistic art. 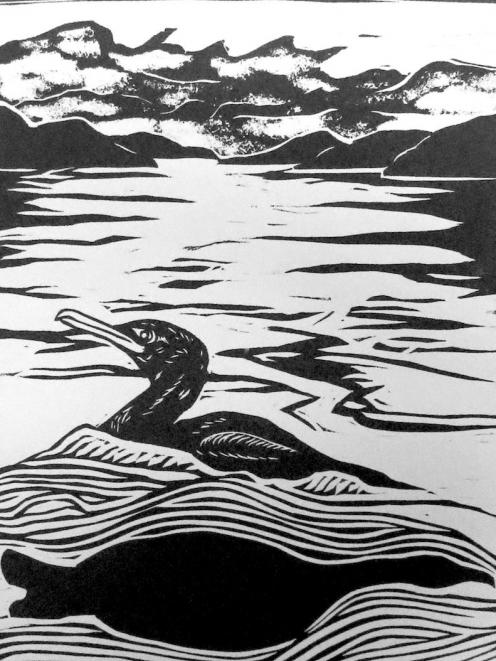 Given his first name, and his residence by the waters of Otago harbour, it is no surprise that birdlife has long been a subject fascinating to Manu Berry. Past exhibitions by the artist have included the use of bird images as symbolic markers to the history of the harbour and port. In his latest exhibition, he pushes back further in time to the myths and legends of Aotearoa and the Pacific.

Inspired, in part, by the academic research of friend Raphael Richter-Gravier into the use of bird motifs in Pacific mythology, Berry has created a dual suite of woodcuts in bold black and white, respectively illustrating Maori and island tales.

The artist's craftsmanship comes to the fore, as does his ability to present a simple image that is both excellently composed and capable of illustrating a legend with style and respect. There is a strong dynamism to many of the images, with works such as The Rat and the Octopus and Titapu's Revenge almost seeming to burst off the paper. The bird forms themselves are well-rendered, bringing the gallery to life.

The presentation is well augmented by booklets illustrated by the artist and with text by Richter-Gravier, which pair the individual images with a narration of the myths which they represent.