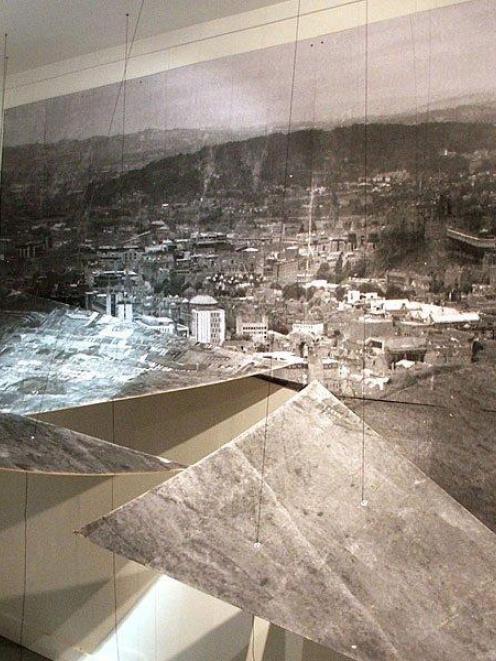 "Edin" is a large-scale installation by Edge of the Grid, a collective made up of photographer James Voller, architect Robin Aitken and sound artist Tane Upjohn-Beatson.

The work spills across three rooms of the Blue Oyster, much of it taken over by giant photographic studies of Edinburgh.

These works have been panelled, layered, and suspended in such a way as to produce three-dimensional structures that become as much geological as architectural.

The tectonics of a city are delineated, and we walk within the strata examining and unearthing the structure within.

The gritty energy of the city is reinforced by the sound sculpture which emerges from one gallery, and is complemented by the solid metallic pipe- and boiler-work which dingily decorates the walls.

A scale model of the gallery itself hangs from one wall.

We are presented with ourselves looking at the gallery, the gallery within Dunedin, and Edinburgh within the gallery.

The relationship between viewer and viewed, and between Edinburgh and Dunedin is hinted at (and indeed the photos look remarkably Dunedin-like).

In providing a new view of the old city, the psychological and historical connection between it and our newer city is evoked and examined. 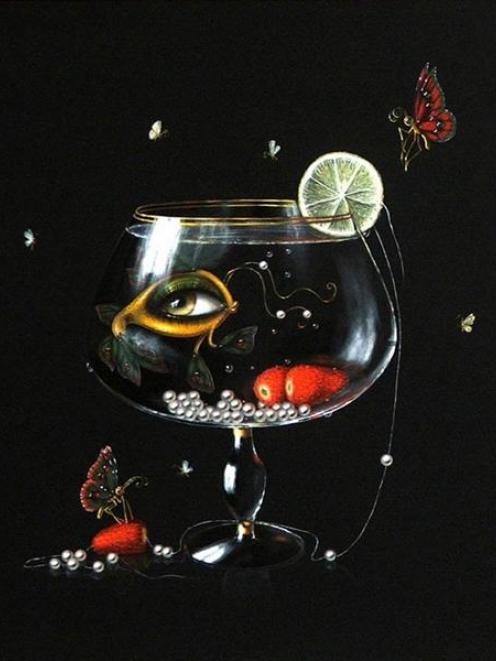 Leila Ataya's artwork runs a carefully worked tightrope. In the wrong hands, her images could appear cute, or worse, mawkish.

The hybrid demi-creatures and jewellery insects, painted against velvety blackness, have all the ingredients to make what could be entirely overcooked images.

Her long study of orthodox religious iconography gives her a good sense of how to present small, heavily detailed images in a way that is emotionally strong yet calm and cool enough to avoid sentimentality.

As such, her compositions are busy yet not overwrought, charming, without being twee.

Her ability as a painter also allows the work to live.

Check the fine detail on fur, twine, or fruit, or the solidly metal and jewel work on the butterflies, and you cannot help but be impressed with the skill displayed.

The images are sumptuous and often humorous, though I cannot help but miss some of the earlier work from the artist, work that was less reliant on bird-cats and cat-deer and was built on the crystal and pearl perfection of the still life.

Despite that, this exhibition is another exquisite display of Ataya's imaginative and artistic abilities, and is enjoyable as such. 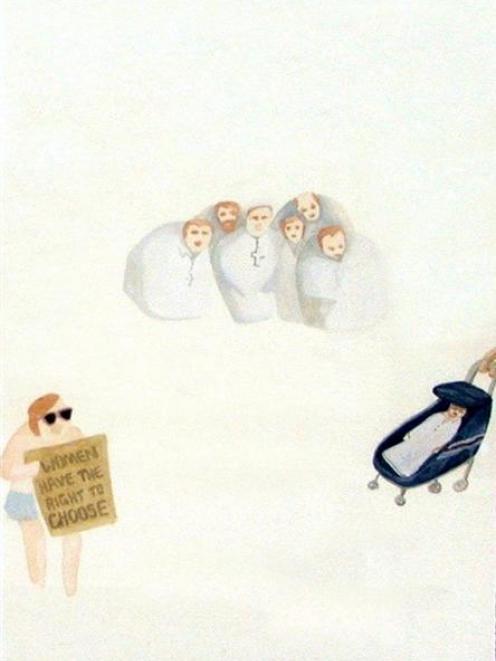 Art can be found in all sorts of hidden spots around the University of Otago, and so it is with a small collection of works by Emma Chalmers, hidden away above the newspaper stands on the Central Library's first floor.

Six small gouache and paper works are displayed, nicely presented suspended in clear perspex on hooks and line from the ceiling. The works depict figures, individually and in groups, all painted in muted, washed tones against an empty background.

The paintings are on unadorned, rough-edged paper within their plastic cases, allowing the images themselves to be the complete focus of our attention.

There is an enigmatic narrative to the series which can be seen as a thread of feminist allegory, perhaps informed or inspired by recent religio-political events in both the Middle East and the American Midwest.

The pervasive theme of the struggle for education, rights, and suffrage against a backdrop populated by priests and imams turns the works into ironic icons. They find a natural resonance in their location, above details of current events within an institute for study and education.

Chalmers' art is simple and whimsical to the point of almost being naive art, yet the message in these works transcends this style to produce fine politically nuanced work.