This week James Dignan examines the works Brian Alexander, Suji Park, and the newest group show at The Artist's Room. 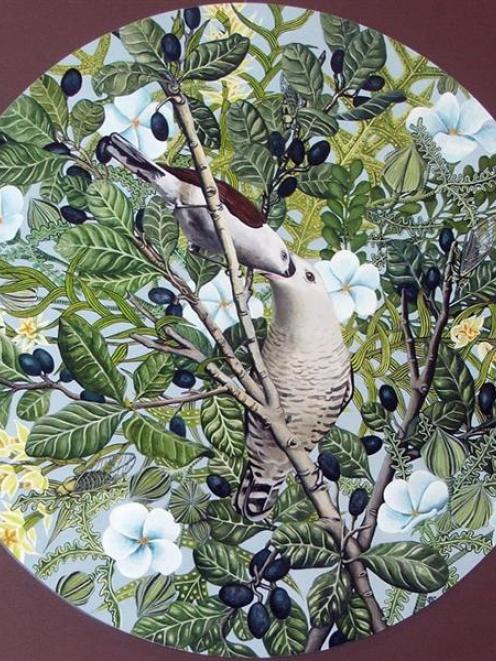 Each artist is, in his or her own way, impressive. Gillian Buckley's mixed-media portraits rely on her excellent use of graphite and the subtle use of accent colour to produce captivating images. No less captivating are the ''posed candid'' photographs of Emily Hlavac Green, which clearly reveal the photographer's training in the world of fashion. These high-gloss images show the city at night as a tantalising, glamorous darkness.

In contrast, Alex Lovell-Smith presents a more real, gritty city, in works which have the bite of photo-reportage. Tama Taita's bold charcoal portraits also present portraits which have the dynamic feel of vitality.

Tom Field and Hannah Joynt have both produced distinctly New Zealand landscapes in their paintings. Both use oil, but in diametrically different ways, Joynt with gentle washes of colour which effectively evoke bleached stones and rushing water under grey skies, Field with heavy impressionist impasto to produce a vivid country of clotted-cream mountains and waters.

Anna Priluka combines the other artists' landscape and portrait, reality and idealisation, with her fine and intricate circular bird and plant studies. These capture a microcosm of the land and its denizens with joy and warmth. 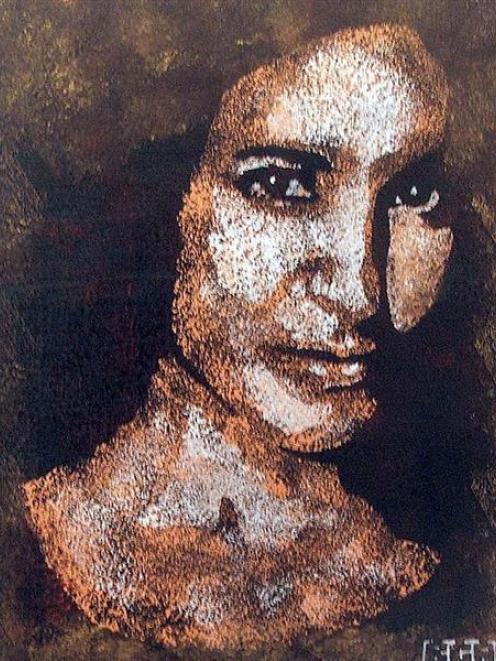 <i>Madeleine</i>, by Brian Alexander
Brian Alexander has long had a fascination with metal and machinery, yet where other artists with engineering training might take to sculptural installations, Alexander has made use of his interests in a more lateral way with paintings using the burnished tones of metal as colour.

In ''Coppertone'', the artist has created works on numerous subjects, all low-key and heady with rich copper browns and iron blacks. The majority of the pieces fall into two broad groupings: a set of close-up portraits, several of them based on well-known public figures, and a series of organic, thorny abstracts with appearances reminiscent of luscious seed pods. The work is effective, with the metallic tones giving the impression of hammered plate, especially in the portraits.

In many ways, however, it is the works which do not fit into these two series which are the most eye-catching. A meditative abstract work showing a halved circle in brass and copper with a silver corona is impressive, as is a narrative piece showing two human forms touching fingers across a silvered rift. Perhaps the star of the show, however, is a group image of female nudes which owes a lot to early-20th-century art. This heavily stylised figurative piece reveals more facets of itself with each repeated viewing. 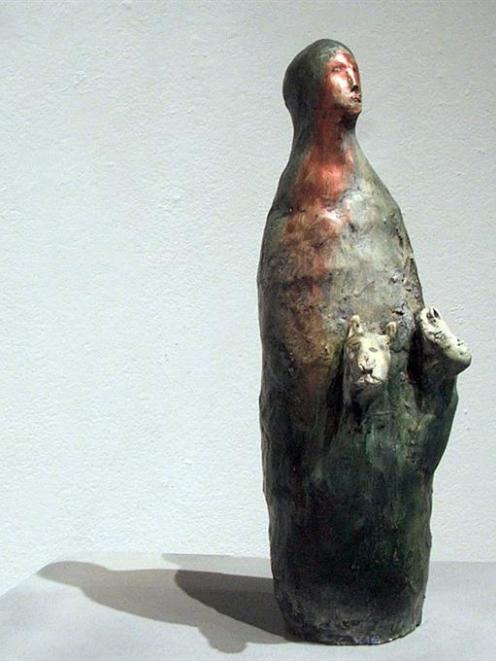 <i>Hu</i>, by Suji Park
Suji Park has returned to the Brett McDowell Gallery with a new exhibition, ''Anu''. As with her previous displays, the distorted human form is to the fore in many of her intimate, metallically glazed sculptures, but in this exhibition they are accompanied by pure vessel forms and abstract constructions.

In figurative pieces such as Yua and Hu, the artist presents meditative chimeric figures, human and animal characteristics blending into wholes which are simultaneously pleasing and mildly disturbing. It is perhaps not too much of a stretch to consider these amalgams as a continuation of Park's examination of her own situation, straddling the gap between Korean and New Zealand art history and styles.

Anu is the surprise piece of the exhibition - a mixed media cube of clay, stone, and perspex, it presents an enigma to the viewer, attracting and confusing at the same time.

Though Anu is intriguing, the impressive deception of Vessels I-IV perhaps best displays the often-hidden subversive side of Park's art. These four pieces appear as charming yet roughly hewn clay pots, each glazed with a heavily metallic lustre. The truth, on closer inspection, reveals itself; these works are metal, deliberately hammered and shaped to appear as rough ceramic; clever, effective, and skilfully created deceptions.